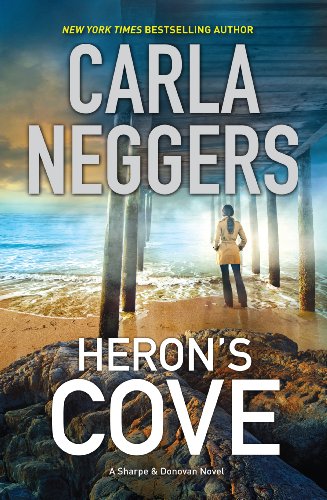 Emma Sharpe and Colin Donovan have what one might delicately describe as a “complicated” relationship.

FBI Agents working on the same special ops team, their relationship has been fraught with tension from the beginning. In Heron’s Cove, the action takes place a month after their last case (and the one in which they begin their relationship) and things aren’t settling down.

Colin has just come out of an unsuccessful undercover assignment, barely escaping with his life. Emma’s past as a member of the Sharpe family—a family with a very long history of dealing with art crimes and the people who perpetuate them—comes back to haunt her.

The host of secondary characters, mostly family members, don’t make anything easier as they, too, jostle for position in the new world our main characters now inhabit.

Heron’s Cove is not the book with which to begin this series. Indeed, most of the action, relationship centered or otherwise, was lost on me as I struggled to remember who was who, and why they were there, and what happened previously possibly affecting their current situation.

This struggle affected most of the experience of reading the novel: not having a strong understanding of Emma and Colin’s relationship meant a lack of patience for their issues.

Not having much in the way of personal experience in regard to undercover operatives decompressing, I can’t say for sure if Colin’s experience is true to life, however his general peevishness—indeed, if you pardon the bluntness, he’s a bit of a prick—makes it hard to understand why Emma continues to not only put up with his behavior, but tacitly condone it, apologizing and blaming it all on a need to decompress.

Most of the secondary characters make this observation through the course of the novel, but as a further example of Colin’s general unlikability, he ignores everyone, and continues to do as he likes.

Furthermore, while refusing to be open about his life and work, he makes unreasonable demands on Emma, coming just short of accusing her of being involved in the crime that makes up the bulk of the suspense of the novel.

Emma, on the other hand, is a very likeable character, multilayered and nuanced, if a bit misguided in her choice of men. An ex-nun, an ex-art detective, now an FBI agent, she is calm, cool, thoughtful, and methodical. This characterization is handled particularly well in the way secondary characters respond to her—organically and openly.

The crime itself is fascinating, delving into Russian folklore, Art Nouveau jewelery, and design.

Indeed, less time on Colin’s neuroses and more on the background to the main suspense plot would have improved the reading experience. This also felt glossed over, and it’s difficult to determine if this is a result of a lack of experience with the series or an imbalance between the romance and the crime plot.

With all the problems, however, Heron’s Cove is an enjoyable read, and if you are already familiar with the series, you will no doubt be pleased with the progressions made in terms of character growth and relationship development.

Even though I found myself swimming in deep waters through most of it, I was still invested in the story, particularly as it related to Emma.

Readers new to Carla Neggers might consider starting with Saint’s Gate, the first in the Sharpe & Donovan series.