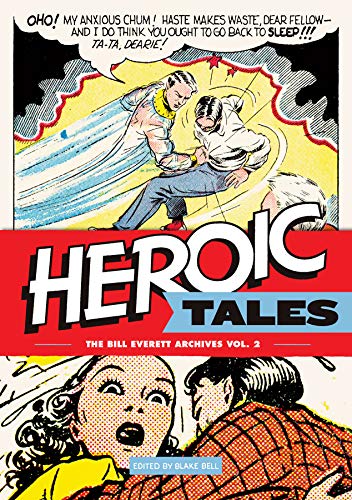 Bill Everett was an artistic chameleon and an imaginative writer who could handle any assignment thrown his way. He helped create an art form and was instrumental in standardizing the way comic books are created.

This second collection of Mr. Everett’s work covers the years from 1939 to 1971. In it editor and historian Blake Bell has brought together a wide range of stories and original art to celebrate the work and life of a man who was among the best of his time.

On the cover of Famous Funnies #85 (Aug 1941) Mr. Everett creates a stunning look of total anguish on the face of a man just seconds from drowning. The crew of a seaplane is working furiously to get him on board before he expires. Not only does the page bring the thrill of adventure to life but we also experience the pain of near death.

There is a one-page parody of pinup girl art demonstrating that had he chosen to, Mr. Everett could have had a career equal to that of Gil Elvgren or Alberto Vargas in the world of pinup art. Two men generally considered to be among the best ever in the genre.

In the early seventies the artist was still growing and learning. In the horror story The Man Who Stole Eternity (written by another man who began in the Golden Age, Gardner Fox) Mr. Everett’s art is a skilled mix of action, terror, and horror with a just a touch of then-current psychedelia thrown in.

The book organizes the stories by theme, Heroes, Humorous (and others), and Horror. The art has been cleaned and restored to modern standards of production and looks fantastic. Much of it hasn’t been seen for decades.

Each section is prefaced by a concise and insightful introduction written by Mr. Blake. These essays enlighten us as to the artist’s accomplishments as well as his troubles.

At the start of the book Mr. Everett has already created the Sub-Mariner (comic book’s very first mutant). The medium isn’t even ten years old and already he is an experienced veteran with a notable success under his belt.

Comic books were quickly evolving from being filled with reprints of newspaper strips to containing nothing but original material. The change was happening overnight. Few in the field could grasp ideas such as structure, pace, and style that needed to be married to the new format.

Mr. Everett instinctively knew what it took for a book to work. At the time it was normal for him to write, pencil, ink and color entire stories by himself. He played with the way panels were arranged and created cover art that drew customers over to the book.

While some of his early work occasionally feels rushed or a bit clunky, it is important to remember the speed at which he and others were forced to work. Publishers wanted comics and they wanted them five minutes ago! When he begins to fire on all cylinders the art is thrilling to see. His growth in all areas is spectacular.

The collection reprints a vivid Hydroman story taken from Reg’lar Fellers Heroic Comics #6 (May 1941) that is a feast for the eyes. Created at the suggestion of a publisher who wanted another water-based hero like Sub-Mariner, Hydroman never rose to the ranks of a major character, but his run was still a strong one.
Using a judicious mix of white space and light colors throughout the entire story, Mr. Everett brings a feel of reflective water to the art that never leaves the reader. What he creates borders on the ethereal but the story is still fully anchored in a world made of concrete.

Mr. Everett held a restless mind that crossed the boundaries of genre with an unparalleled skill. It was nothing for him to move from a hero like Amazing-Man to the creation of a western such as Bull’s Eye Bill.

The fifties saw horror titles came into vogue with the public. Mr. Everett continued to draw other stories, but his horror work is among the best of the decade. The Hangman’s Noose, which originally appeared in Suspense #5 (Nov 1950) from Marvel, features a completely mad splash page. The end holds a twist at the end that is worthy of The Twilight Zone.

As time went on Mr. Everett’s personal demons took their toll on his work. But he was so good and so respected that publishers and editors always wanted to bring him in to their projects. Working with Stan Lee he cocreated the modern Daredevil. But his first story for the new character was so late they had to take him off of the book.

In his introduction to this collection Mr. Bell quotes Mr. Everett talking about the early days of comic books. “There was beautiful part of the beginning of the field, too; we had nobody to imitate.”

At the end of his troubled life it was beautiful again. Several years sober Mr. Everett devoted himself to helping others he met at meetings. After years of being one of the most revered inkers and colorists in the industry he had begun to draw again.

His last job was drawing the character he had created all those years ago, the Sub-Mariner. A fitting close to a circle that started nearly 40 years earlier.

This is a truly revelatory collection that takes the reader from the birth of an art form into its modern era.