The Herods: Murder, Politics, and the Art of Succession 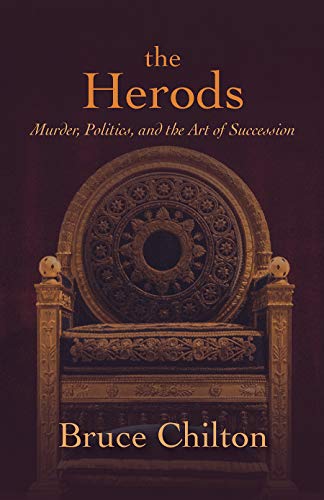 Keeping straight the Herods of biblical history—monstrous but monumental leaders around the time of Jesus, as well as their offspring who sometimes used the same name—is no easy feat.

Among scholars, for example, there remains disagreement whether the “Massacre of the Innocents” in Bethlehem, reported in Matthew 2:16-18 (but in no other Gospel) was the work of Herod the Great, or his son, Herod Antipas. Or, for that matter, whether the slaughter of Jewish babies and toddlers by a paranoid ruler fearful of a coming Messiah happened at all.

In The Herods: Murders, Politics, and the Art of Succession, biblical scholar Bruce Chilton writes that his purpose in chronicling the dynasty is “to relate a complicated history in a coherent way.”

Chilton delivers on this promise and makes the tale entertaining for general readers who are not New Testament scholars. In parts, his new account of the bloody, biblical dynasty, with its licentious sex and endless court intrigues in Rome and Jerusalem, is a cross between I, Claudius and Game of Thrones.

“In a pool of blood,” Chilton writes of the first of the dynasty, “Herod claimed the power that would cause him to be remembered as ‘Herod the Great.’”

This first Herod, a descendant of an Idumean convert to Judaism, married a Maccabean princess to legitimize his transition to lead Judea. A favorite of Rome, he is credited for building the port of Caesaria Maritima, the mountain top fortress of Masada, and starting construction of an enlarged, magnificent temple.

“Recent scholarship has detailed Herod’s personal tragedy and has also shown how his entire family developed and tailored his project of governance within the changing politics of Rome, Judea, Galilee, and international Judaism. Herod and his offspring knew how to play the politics of God.”

But all of this came at a terrible cost.

Herod the Great and others of his line who followed “played a ruthless game, eliminating enemies as they went—Jews and gentiles, Egyptians and Parthians, distant relations and close family,” he writes.

The Herods were also directly or indirectly responsible for killing the founding fathers of Christianity.

“Their violence and their sophistication complemented one another, as they consolidated the power of their dynasty by means of military prowess and political skill and projected their dominance by resorting to public spectacle, massive projects of building and charity, and their appropriation of the traditional symbols of Israelite power.”

In their brutality, their brilliance, and the relative brevity of their respective reigns, the Herodians were reminiscent of England’s Tudor dynasty 1500 years later.

Chilton’s story is constructed using a number of sources. Inevitably, given the relative paucity of other contemporaneous accounts, the author relies heavily on a man named Josephus, a Judean general who surrendered to Roman forces in the uprising of 68 CE, and then joined his former adversaries.

As a historian, Josephus often shaded his accounts to favor the Romans, producing two sometimes contradictory and sometimes unreliable accounts of the period, “The Jewish War” and “Antiquities.”

Chilton is the author of numerous scholarly books of the period, including Rabbi Jesus: An Intimate Biography. He supplements this account with Roman sources like Tacitus and Suetonius, and the New Testament’s Book of Acts, along with some traditional Jewish sources.

The book’s footnotes are studded with familiar names of contemporary biblical scholars, including Chilton himself, professor of religion at Bard College.

Occasionally, Chilton veers into the scholarly weeds that may cause the eyes of general readers to glaze over, detracting from its crossover appeal.

However, to his credit, Chilton focuses on the critical but sometimes overlooked role of the Herodian women—wives, sisters, and daughters, including the infamous Salome.

“Herodian rule can be seen as disruptive, a breach of the tradition of the legitimate governance of Israel,” Chilton writes.

The Herodians were preceded by the Maccabees, most famous for the Hanukkah origin story, and their fight for religious freedom and national independence against the Syrian Greek leader Antiochus Epiphanes IV. Later, their empire ruled a land area greater than that of Kings David and Solomon.

By the time the books Maccabees 1 and 2 were written the canon of the Hebrew Bible was essentially closed, although the books are included as Scripture in the Catholic and Orthodox New Testaments.

For all their pious and warrior exploits, the rabbis were uncomfortable with a dynasty that was not descended from King David, and thus they were considered usurpers, rather than legitimate Jewish royalty.

Also, as Chilton points out—at length—the Maccabees were a line of rulers that ended disastrously for the Jews and Israel. It was this bickering clan who allowed Rome to intervene on their behalf, which in turn led to their subjugation as an independent nation state, and to the ruinous rise of the Idumean Jewish Herodians.

While still in power, the Maccabeans, also known as the Hasmoneans, could themselves be brutal in imposing Judaism on their conquered and assimilated neighbors, like the Idumeans, south of Judea, and enforcing their version of it on their own people. As in the case of modern Iran, this enabled the ruling theocratic clergy to grow rich and ultimately corrupt.

“The Maccabees ruled in a way that religiously inspired movements of resistance sometimes do: by absorbing the imperial ethos of their oppressors,” he writes. “Piety under the Maccabees conferred wealth, sustained social status and justified violence,” Chilton writes. “They forged their religion into a weapon.”

Before they were done with their mayhem, the Herodians effectively exterminated the Maccabean dynasty. And despite the thousands of Jews and Christians who lost their lives under their rule, the Herodians presided over and, arguably, were the unintended midwives of both rabbinic Judaism and Christianity.

“One of the great ironies of Jewish history,” observes Eric Meyers of Duke University, “is that the finest remains of the Second Temple were built by one of the cruelest and most savvy leaders of the Jewish people. Herod the Great is the king one loves to hate.”