Hero: The Life and Legend of Lawrence of Arabia 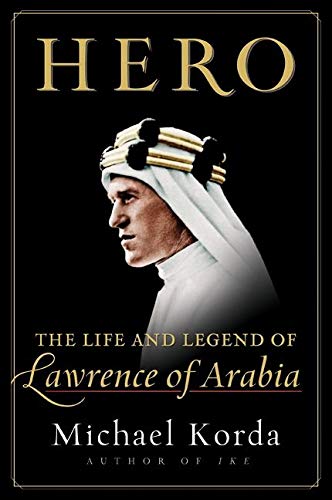 When T. E. Lawrence died in 1935, the world and its politics had changed completely. Seen by many in his own time as a young Napoleon Bonaparte for his military genius, and viewed by many today as a shrewd architect of Middle Eastern politics and nationalism, Lawrence’s influence and political savvy extended far beyond military campaigns into a carefully cultivated mystique—the mettle of a Classical hero merged into the modern era.

Lawrence actively sought out heroic qualities—intellect, stamina, political savoir-faire—as characteristics to embody. In the spirit of Ajax, who does not receive any direct, personal help from the gods in the Iliad, Lawrence’s life is filled by simple self-determination through actively cultivating the things that he needed to succeed in his ambitious roles as a scholar, military leader, and political architect.

In the years following the Great War, where post-war, jaded cynicism left many questioning the bearing and purpose of Classicist heroism, Lawrence’s role in emerging global politics showed the relevance. Ulysses still had something to offer the modernist milieu.

Michael Korda’s biographic narrative, Hero: The Life and Legend of Lawrence of Arabia, captures the breadth and expanse of Lawrence’s life—from his childhood and stint in archaeological academia to military campaigns and literary successes.

Korda artfully weaves stories and into the creation of the Lawrence legend. He shows that Lawrence’s place in history–his place as a legend–is not accidental; rather, it is due to Lawrence’s carefully cultivated skills and experiences. Lawrence is in the historically right place at the right time because he realized he should put himself there.

Born in 1888 in Tremadog, Wales, to a somewhat unorthodox family, Lawrence developed a fascination with medieval castles, bicycling, and “cultivating an indifference to danger and hardship, as well as emotional independence, as if rehearsing for a role he was about to play . . .” While working on his postgraduate work in medieval pottery, he turned from a life in the museum for the excitement and adventure of archaeological field work in what is now modern Syria. Lawrence continued his involvement with archaeology—becoming “fluent” in the cultures, languages, and customs that surrounded him—until October 1914 when he was commissioned into the British Army.

Lawrence’s career in the British Army shot to fame with his capture of the lightly-defended town of Aqaba, considered significant due to its strategic location. After the war, Lawrence was completely occupied intellectually and emotionally with the development and strategic importance of creating an Arab state and he completely devoted himself to the cause of Arab independence and nationalism. Indeed, in 1919, few others in the British Foreign Office understood the complexity of the question of Arab nationalism as completely as Lawrence.

Throughout his travels, both as an archaeologist and explorer within the Levant as well as a commissioned officer in the British Army, Lawrence developed the habit of adopting local dress and customs. He determined that an adoption of local customs would help integrate him with the local soldiers. Although baffling and disconcerting for many of his fellow British officers, the legend of the short, brilliant Arabic-speaking British officer in Bedouin dress quickly became the stuff of legends. Interesting, this shrewd political move came at an unexpected emotional price. He no longer felt that he completely fit in either place–the bridging of two cultures came at the expense of fitting into either one completely. Lawrence seemed to live from the outside of a culture looking in.

Lawrence’s mystique as “Lawrence of Arabia” was fairly solidified by the films and propaganda shot during his time in the Levant. Upon his return to England, he wrote The Seven Pillars of Wisdom and enlisted in the Royal Air Force (under a different name).

The years following his time in the Levant show a brilliant literary scholar and enthusiastic correspondent of George Bernard Shaw, but, as Korda suggests, Lawrence never seemed to find the same sense of place and accomplishment that he had between 1914–1918. He was a man caught between two worlds–he knew both and neither and is restless. The excitement of idealism and cause gave way to the harsh reality of the geopolitical bureaucracy of the League of Nations and the West’s own nationalistic agenda. Lawrence is Ulysses coming back to Ithaca to the mundane after the excitement of the Trojan War.

Korda’s biography does more than simply present various episodes from Lawrence’s life. It tells the biography of his legend as well. It demonstrates that, the although constructed, the role of Classicist heroism resounded incredibly well with many following World War I. Rather than being a “hero by accident,” Lawrence’s activism and determination for leadership and adventure, coupled with the exoticism of his commitment to the cause of Arab nationalism and British empire, Lawrence’s status as hero would seem deserved within the context. With so many biographies of T. E. Lawrence, Korda’s detailed research and narrative arch, coupled with the narrative explicating the creation of Lawrence as a hero, creates a unique and reflective niche for the book.

Perhaps most poignant, however, is Korda’s treatment of Lawrence in the decades after Lawrence returns to England. Here, Lawrence has failed to deliver on his promises to his Arab allies the creation of an Arab nation-state, he has published Seven Pillars of Wisdom at a huge emotional cost, and has enlisted in the Royal Air Force under a different name. Here, the reader cannot help but associate Korda’s Lawrence with Tennyson’s Ulysses–both are unable to rest from travel, having seen many climates and cities, and desperate to seek newer worlds.

Korda’s biography of Lawrence’s life and legend conjure up a pathos and a very human side to the mystique of Lawrence of Arabia.