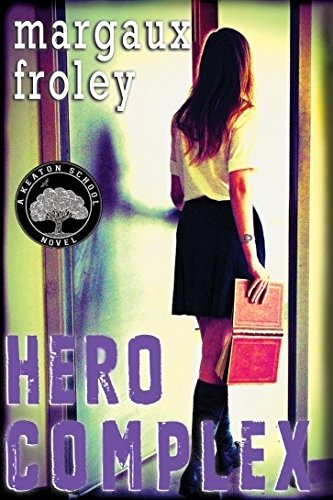 “Embracing the full gamut of teenage emotion and vernacular, Hero Complex is a mystery filled with suspense and intrigue to devour with relish.”

Seventeen-year-old Devon Mackintosh attends the elite Keaton School. A pauper among the wealthy, she is attending on a scholarship but doesn't let the trappings of the rich entice her.

On New Year's Eve, Devon, along with her friend and classmate, Cleo Lambert, is celebrating the holiday. They are on a 250-foot yacht while Cleo's dad is wining and dining his colleagues.

After imbibing in three flutes of the bubbly, Cleo suggests they head to the entertainment room. On the way, Devon is mesmerized by a wall of mirrors and frets about her mussed hairdo. Cleo goes on ahead, and Devon notices one mirror is a door opening to a massive bedroom, one seeming to have been designed for an architectural magazine.

Glancing inside and swept away by the austerity of the suite, she is confronted by a cute waiter, Eli—the exact person Cleo stated she would kiss at midnight. Eli disappears as Devon enters the room after spotting an antique spyglass. Feeling a bit lightheaded from the champagne, she opens another door presuming she will find her friend, but she is on an outside balcony. Next thing she remembers is being cracked on the skull by the spyglass.

The ship returns to shore after Devon's "accident," and she is hospitalized with a huge lump on the back of her head and a bruise under her eye. As she recuperates, she concludes her assault was premeditated. Who would want to hurt or even kill her? Could the Hutchinses have hired someone after Devon revealed who a classmate of heres was murdered by?

Now, back at school Devon is seeing a therapist for her alleged post traumatic stress. No one believes what she does: that this was personal and not a random attack. Though everyone considers Devon paranoid, her friends, computer geeks, Raven, and Bodhi Elliot do believe her and with their help, the three search for clues as to who is after her.

Soon, Devon's paranoia becomes real when she realizes she is being followed. Terror sets in as she flees from this man to seek refuge. The Elliots are the elder Reed Hutchins' benefactors, and live in his carriage house. They know they are the only ones who can find answers before Devon faces worse danger.

Reed summons Devon to his home one night. On his deathbed, he hands her a journal, explaining it is meant for her as shown in the following: "He pulled the mask low and croaked, 'Take the diary. You'll need it to follow the footsteps. Follow our footsteps, Devon. Follow them.'"

A bit confused, Devon skims through the pages while Bodhi locates the mysterious Eli from the ship, deciding to talk to him to learn who is after Devon.

Devon tries to untangle the mystery of her assault as she peruses Reed's journal, which was penned during World War II. Within the writings, she discovers valuable information, though she is still puzzled as to why Reed entrusted the book to her. Unfortunately, she is unable to ask him, for he dies after her visit.

Escape Theory, Ms. Froley's debut novel introduced Devon as a peer counselor and sleuth. Hero Complex is a continuation of this these, and though it stands on its own, reading the first book would be advantageous as it offers information from Devon's past which is better explained there.

Embracing the full gamut of teenage emotion and vernacular, Hero Complex is a mystery filled with suspense and intrigue to devour with relish.