A Bond Undone (Legends of the Condor Heroes) 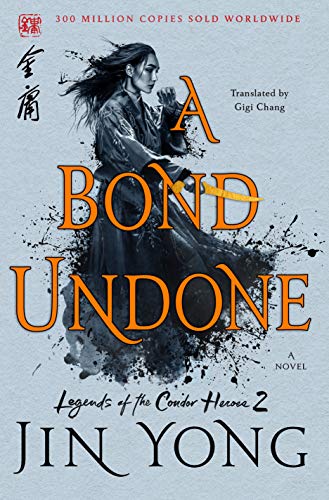 “If Jin Yong’s story continues to grow richer as it progresses, by the end it will pack an impressive punch.”

This second volume of the Legends of the Condor Heroes series follows hard on the heels of its predecessor, A Hero Born. Like The Lord of the Rings, the English-language fantasy to which it might best be compared, this is not a story designed to be broken into distinct units; it tells an ongoing story, broken into parts for the convenience of the publisher and the reader.

Because of this, the opening picks up immediately where the first volume left off, with Lotus Huang declaring “I won!” in reference to the fight she was engaged in at the end of A Hero Born. Indeed, the majority of the first hundred pages take place that same night or the following day, with a continuing series of battles between different groups of wulin fighters; this is clearly just the rest of the event that occupied the end the previous book.

It makes for a somewhat wearisome beginning, but fortunately the narrative picks up more variety and pace after that. As Guo Jing and Lotus Huang travel together, they encounter most of the surviving Five Greats of the martial arts world, and the lines of relationship and antagonism that connect the different fighting traditions weave together into a rich tapestry. Much of it concerns the struggle over the legendary Nine Yin Manual, a martial arts text said to hold the deepest insights into kung fu—but this is no standard fantasy Macguffin. Both the history of the Manual and how it gets deployed in the present moment feature some pleasing twists of fate.

There is also quite a bit of humor to be found here. From the battle in which the fearsome but blinded and half-paralyzed Cyclone Mei rides around on Guo Jing’s shoulders while interrogating him on Taoist philosophy, to the culinary blackmail by which Lotus Huang persuades Count Seven Hong to train Guo Jing in his style, to the bizarre antics and crass pranks of Zhou Botong the Hoary Urchin, Jin Yong leavens the dramatic struggles of his characters with a much-needed sense of whimsy and perspective.

But the drama also has its place. This is a world where the term “hero” refers more to someone’s martial prowess than to their moral character—which means not only that the protagonist and his allies may be flawed, but that sympathy can be found in the antagonists as well. This applies particularly to Cyclone Mei, who in the first volume appears almost completely monstrous but here acquires depth and pathos, and to the Eastern Heretic Apothecary Huang, Lotus’ father. By far the least sympathetic character here is the so-called Gallant Ouyang, whose “gallantry” consists of kidnapping scores of beautiful young women and somehow persuading them to become his devoted followers and mistresses. Toward the end of this volume, his pursuit of Lotus Huang exhibits all the distasteful characteristics of a man who not only won’t take “no” for an answer but convinces himself it was never spoken in the first place.

Having said that, this 60-year-old novel does a better job by its female characters than many published in recent memory. The women don’t necessarily operate on an equal footing with the men—although they practice martial arts, they’re almost always overmatched by their male counterparts—but they are present and active in the story, winning respect not just for their devotion but for their strength, their intelligence, and their cunning. They may still be few in number, but their actions unquestionably make a difference in the narrative.

In fact, much of the current struggle around the Nine Yin Manual hinges on the actions of two women, Cyclone Mei and Apothecary Huang’s late wife. Because of this, when Zhou Botong insists that women are utterly destructive to a martial artist’s hope of greatness and the best thing for Guo Jing to do is to swear off them entirely, it comes across as the rantings of a less-than-stable character, rather than an authorial mouthpiece.

This volume ends on what feels like a more natural breakpoint than the first one did, though a new peril looms close and will presumably strike home in the early pages of the third installment. If Jin Yong’s story continues to grow richer as it progresses, by the end it will pack an impressive punch.