A Hero Born: A Novel (Legends of the Condor Heroes) 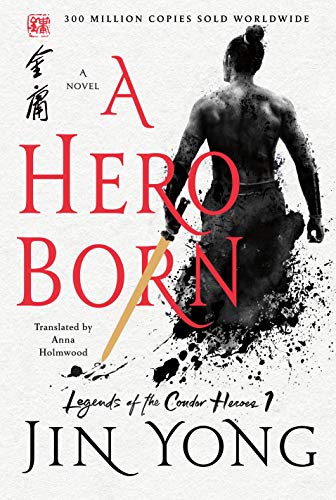 “As the turbulent events of the Jin-Song Wars gather speed, the scope of the story is poised to expand far beyond a simple tale of filial vengeance.”

Early in the introduction to A Hero Born, the translator Anna Holmwood says,

“Remarkably, you hold in your hands the first edition of Legends of the Condor Heroes to have ever been published in English in the United States. Considering that [Jin Yong] has sold in the hundreds of millions and his reputation extends over most of East Asia, it is astonishing that it has taken sixty years to get here. Why, you may ask?”

The standard answer is that Legend of the Condor Heroes is “too foreign, too Chinese, for an English-speaking readership” to easily make the transition—but that has not stopped translations of The Lord of the Rings, which in terms of popularity and erudition of the author is likely the most comparable English language work. The true answer is the general imbalance that sees many more novels translated out of English than into it and treats European culture as more universally understandable than the tales and traditions of other lands.

Having said that, The Legend of the Condor Heroes is undeniably steeped not only in Chinese culture, but in a specific point in history: the late 12th and early 13th centuries, when the Jin (Jurchen) dynasty and the rise of Genghis Khan threatened the stability of the Southern Song Empire. This translation provides a number of ancillary resources to orient the novice reader, including a cast of characters at the beginning and a series of endnotes at the back that explain the historical and cultural context.

Some readers will be annoyed at the outset by the handling of names. Holmwood has made the decision to translate some given names, but not all. While the colorful results may suit the over-the-top martial jianghu world, it often creates an exoticizing feel, and it leads to inconsistency about the placement of family names: the father of Guo Jing is referred to as Skyfury Guo, and the father of Yang Kang is Ironheart Yang, while the daughter of Mu Yi is Mercy Mu.

The shape of the narrative is distinctly unlike modern, Western novels. One of the two main characters of the series is born on page 106, and the other does not appear until even later. What another book might treat as backstory to be filled in through later exposition or conversation here gets played out in full. By contrast, the ending is as abrupt as the beginning is leisurely; although it reaches a climax with a key encounter, there is no denouement. That is presumably due to the fact that A Hero Born is the first of four volumes translating the Chinese original: much as with The Lord of the Rings, it was not structured with the intention of being split.

The general tenor of the tale, however, will be entirely familiar to those with some grounding in the wuxia genre of film. Much of the narrative here is driven by the training of Guo Jing in the martial arts so he can avenge his murdered father, and both he and his shifus (masters) engage in a series of friendly contests or serious battles against other members of the martial arts world. The text abounds in the names of arcane styles and moves, with the characters gathering their internal energy to resist energy or overcome their opponents.

This focus on lengthy and frequent battles means that for the page count, the number of incidents in the story is relatively low. Again, this is only the first volume out of four; it concludes at a point where the plot is truly beginning to come together.

Readers coming at it with an expectation of a modern English language fantasy novel may find the story comparatively thin. Those prepared to appreciate it for what it is, however, can revel in Jin Yong’s detailed exploration of the inner experience of actions more often seen only from the outside, and the forces of loyalty and obligation that drive the characters. And as the turbulent events of the Jin-Song Wars gather speed, the scope of the story is poised to expand far beyond a simple tale of filial vengeance.