Hereville: How Mirka Met a Meteorite 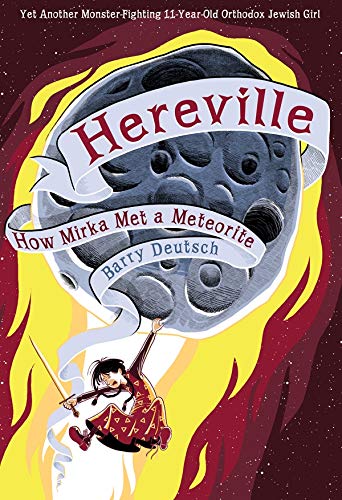 Beam up to Hereville: How Mirka Met a Meteorite for a far flung fantasy pulsing with tween angst, wild adventure, and vivid artwork worthy of a memorable protagonist.

As in his first Hereville graphic novel, Mr. Deutsch presents the plight of 11-year-old Mirka Hirschberg, an awkward, vivacious, and utterly likable middle schooler aspiring to heroism. The author/illustrator employs rapier wit and a wacky imagination in developing Mirka, whose feisty persona continues to be shaped by the loss of her mother at a young age and by her orthodox Jewish faith.

Grounded for staying out all night dueling a troll for a sword, Mirka quickly manages to be a tsutshepenish (Yiddish for pest) by knitting way too many berets. After her calm, no-nonsense stepmother Fruma generously liberates her, Mirka does exactly what she should not: She follows a witch’s crazy directions to find the troll who has her sword. The stubbly-faced, multilegged green troll, angry the witch has revealed his whereabouts, rashly calls for a flood of chocolate to swamp her. Instead, he somehow summons a meteorite.

Then it’s Mirka to the rescue, as she races to reach the witch before the meteorite destroys both the sorcerer and Hereville. Unlike the troll, the witch is powerful enough to avert the catastrophic crash. Spiky browed, tattooed, and wearing shorts, this unconventional looking witch quickly reaches down to pluck a few strands of Mirka’s hair. Magically, the meteorite morphs into a clone of Mirka—but one who appears to be “stronger, smarter, and prettier.”

At first, the two girls delight in the prospects of splitting one life. As readers will anticipate, though, conflict looms. The clone, dubbed Metty, manages to take her place at the table most of the time. Not only that, she manages to ruin Mirka’s math grade, to show her up at playing basketball, and even to prevent Mirka from joining the family at Shabbos (the Sabbath).

The rituals of Shabbos, like other details of orthodox Jewish life, come across in interesting visual and written details. For instance, Mr. Deutsch draws a round plate and labels the Shabbos food—challah bread, potato kugel, roast chicken, and green beans. He sprinkles his pages with definitions of well chosen Yiddish words such as bubba (grandmother) and zezt (pow).

Mirka, like other girls of her orthodox faith, wears a long skirt and long-sleeved blouse and has long braids, while her male peers have long side curls known as payes. Thought bubbles large and small reveal how Mirka wrestles with the conflicts between her own impulses and her conscience.

Mr. Deutsch’s choice of giving his pages a background of tans and pale greens puts the spotlight on this graphic novel’s crucial elements: crisp, pen-and-ink facial expressions; varied perspectives; and the quirky humor that spews from his imaginative plot.

While the images of monsters are goofy and laughable, the inner conflict of Mirka as she negotiates her emerging identity as an orthodox Jewish girl is real and relatable.

Metta, who’s strong and beats up bullies, represents the ideal Mirka thought she wanted to become. Yet as Metta repeatedly acts in a selfish, mean, uncaring spirit, Mirka comes to reject such deeds.

Instead, our young heroine finds inspiration in the life of her great-great bubba, who bravely crossed the Atlantic, forever leaving behind her family, home, and best friend.

In a thrilling conclusion, Mirka challenges her nemesis to a battle that not only takes readers to the moon, but demonstrates the strong pull of family—even for a meteorite. Yet another sharp move by an author who’s created a fascinating world with the orthodox Jewish village of Hereville, making the reader eager to return.