Here We Are: My Friendship with Philip Roth 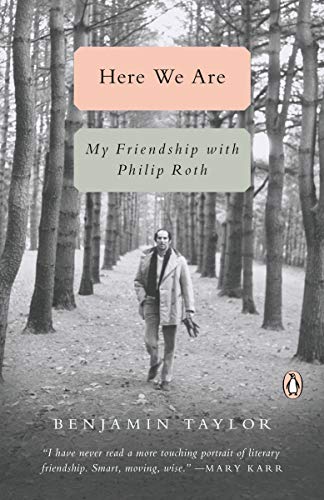 “Taylor’s memoir explores the friendship between two men who think of themselves as Jews, and who behave in ways that seem intrinsically Jewish and quintessentially New York, though one doesn’t have to be Jewish and a New Yorker to appreciate it.”

Then, too, there was the Nobel Prize, which Roth coveted for years before it arrived, or so Benjamin Taylor suggests in Here We Are, subtitled My Friendship with Philip Roth, which weighs in at only 171 pages and can easily be read in one sitting.

Yes, mammoth-sized biographies of the great writer will arrive one day, before too long, but Taylor’s intimate tale will never be replaced by any single work, no matter how big and comprehensive it is.

Unlike some memoirs written by the friends of famous people, this one doesn’t dish real dirt, though the information isn’t all glowing. Here We Are reveals Roth at home and up close, as he has never been revealed before. The reader hears him, sees him, and feels his palpable presence. Here he is, big as life eating, drinking, thinking, and laughing.

Taylor himself has to play an essential role in Here We Are, not only as the one who remembers, but also as the indispensible and loyal friend. But when Taylor tries to take the stage, the gregarious Mr. Roth upstages him. There’s no way to compete with him.

This book might have been called “My Romance with Roth,” though that could have misled some readers. Taylor, who is gay, the author of a memoir titled, The Hue and Cry at Our House and an instructor at Columbia University, doesn't pursue Roth as a lover, and Roth, the inveterate heterosexual, doesn’t fancy Taylor except in a Platonic sort of way, and as a great listener and near constant companion.

According to Taylor, they ate together in restaurants hundreds of times. Here We Are offers striking bits and memorable pieces from Roth’s monologues at the dinner table and beyond in which he talks about sex, women, marriage, and divorce.

“Philip made a poor Don Juan,” Taylor writes. “He was too apt to fall in love. Then, having fallen in love, he needed to escape from the presumed monogamy love entailed, needed to fall in love again.”

After Roth waxes on the subject of love, comes Roth’s death and Taylor’s reflections on memory, which he says, “makes us Jacob, not Esau.” Those who are unfamiliar with the Old Testament won’t get the reference to the Biblical twins and to Jacob’s deception of Isaac, their old, blind father.

Others might wonder why not include Rebekah, Ruth, and Scheherazade, the immortal female storyteller in the One Thousand and One Nights. For all the talk about women, Here We Are is masculine to its core and intensely Jewish, too.

Taylor’s memoir explores the friendship between two men who think of themselves as Jews, and who behave in ways that seem intrinsically Jewish and quintessentially New York, though one doesn’t have to be Jewish and a New Yorker to appreciate it.

Sometimes Roth seems to patronize Taylor, as when he calls him “kid.” But perhaps that was his way of being affectionate. He was old enough to be Taylor’s father.

Sometimes Roth doesn’t seem likeable. Taylor says that “He was not adverse to cuckolding inattentive husbands,” as if the husbands were to blame for the wives who cheated on them.

One also wonders what to make of the fact that Roth threatened to kill Taylor if he wrote about him. “I’m still here,” he says.

Roth offers more insightful comments about American literature than Taylor, who calls all of the late novels by Roth “classics,” including Sabbath’s Theater, Patrimony, Everyman, and Nemesis. That’s a lot of classics.

Here We Are includes endearing photos of Roth at home, with President Obama, and with Taylor, too. They punctuate the narrative and give it the feel of a family album that will last for a long, long time.

Taylor says he spent thousands of hours with Roth. Only some are included here. One wonders which hours have been omitted. Many readers will want more. They’ll have to wait for the mammoth biography.