Here I Am: A Novel 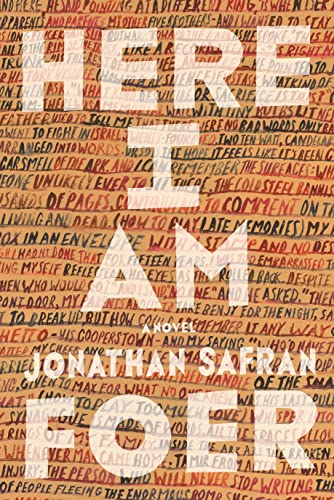 Here I Am, Jonathan Safran Foer’s new novel, is both exhaustive and exhausting. There is no question that the author is brilliant and can write well. The novel is rich with ideas, memorable characters, philosophical and mundane discussions, and even humor. But throughout the course of reading this very lengthy, though usually engaging novel, the phrase “too much information” often came to mind.

The plot of Here I Am centers around the collapsing marriage of Jacob and Julia, their relationship with each other and their three sons, with the dramatic back drop of a massive earthquake in Israel and consequently chaos and war in the Middle East. Most of the drama is conveyed through dialogue and mostly Jacob’s (though also Julia’s and other characters’) obsessive ruminations about and rehashing of the past.

Much in the tradition of intellectual, male, Jewish writers like Philip Roth and Saul Bellow, Safran Foer explores, in great depth and even humor, what it means to be a parent, a son, a Jew, and an American or Israeli Jew.

Although the character of Julia is well developed and generally credible, most of the characters in Here I Am are male, as are the concerns of and many of the lengthy narratives in the novel. For instance, Safran Foer dedicates four pages to detailing how and where Sam, Jacob’s and Julia’s thirteen-year-old son, masturbates, as well as pages of pornographic texts that Jacob sends, which is too much information.

All of the characters in Here I Am over share, and are exceptionally smart and articulate, including the elementary-school-aged sons, Max and Benjy, and the thirteen-year-old Sam, who spar regularly with their hyper-verbal parents. While such erudition and verbal dexterity is believable in well-educated adults, it is less so for the kids and some of the minor characters.

One of Safran Foer’s more convincing characters is Irv, Jacob’s father. While he, too, is intelligent and articulate, he doesn’t sound as much like his son, daughter-in-law, and grandsons. In Irv, the author creates a memorable voice of an older Jew who believes that the world generally despises Jews.

Irv tells Jacob: “The Germans murdered one and a half million Jewish children because they were Jewish children, and they got to host the Olympics thirty years later. And what a job they did with that! The Jews win by a hair a war for our survival and are a permanent pariah state. Why? Why, only a generation after our near-destruction, is the Jewish will to survive considered a will to conquer? Ask yourself: why?”

The narrator’s descriptions are also often excessive, though clever and well constructed. Jacob’s new home is portrayed as, “nice, if slightly less nice, version of his old house: . . . a kitchen with hardware that if it was called bespoke, was called that by Home Depot; a bathtub that probably leached BPA. . . . Home Depot doorknobs; middle-aged, rotting sub-Marvin windows that served as visual thresholds rather than barriers against elements or sound; walls wavy with uncharming trapped moisture; ominous peeling at the corners; subtly sadistic wall colors; unflush light switch plates; a faux-porcelain Home Depot vanity with wood-grained melamine drawers. . . .” This is a highly abridged quotation, and this degree of detail doesn’t really do much to illustrate Jacob’s house or further the novel.

Despite the over sharing of Here I Am, the novel is still interesting, engrossing, at times thought-provoking, funny, and poignant. Ironically or lacking in self awareness, Jacob, the writer, tells his son Max, “We discuss too much in this family.” Well, yes.