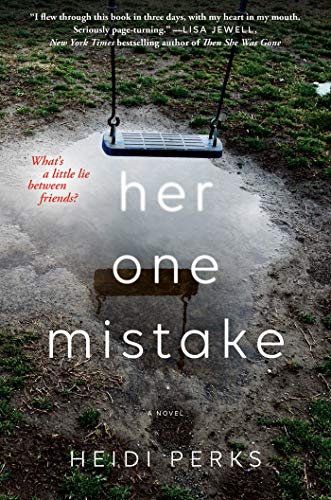 It's every parent's nightmare to discover their child has gone missing, but more heartrending is entrusting your youngster to a friend only to learn they've either been abducted or run away. Charlotte Reynolds befriends Harriet Hodder, a  newcomer to Dorset, England. Many time she tries to talk Harriet into giving up her obsessive hold over five-year-old daughter Alice by offering to watch her or let her come over to play with her children.

Harriet finally allows Charlotte take Alice along with Charlotte's three to a fair at the kids’ school. Harriet decides to take a bookkeeping class, though she does not mention it to her husband for he would disapprove. In his estimation, her job is to take care of their home and Alice. But when Harriet is unable to use her cell during the lecture, she becomes overly anxious and especially more so after realizing her phone is dead.

Alice and Charlotte's two oldest children rush off to play on the Jungle Run leaving Charlotte alone with Evie, her youngest. The two sit waiting on a nearby bench while the kids play and when Charlotte's two return without Alice, she panics. She only glimpsed at her cell phone for a second, so how could the little girl be gone?

Where is she? Did someone take her? She understands kids can take off in a split second, yet Charlotte doesn't believe Alice ran away. Alice is not that kind of child. Now it is Charlotte's turn to panic. She knows how bad it is to lose your own child, but one entrusted to you after having practically begged to do so? What will Harriet think of her now?

"'I don't know what happened. Alice just vanished. She went around the back of the inflatable and never came off it. What do I tell Harriet?' I took another sip from the bottle. 'I can't tell her I've lost her daughter . . .' I cried."

Upon hearing her baby is gone Harriet refuses to talk to Charlotte. Why couldn't Charlotte keep her eye on Alice? As the police investigate, the animosity between the two women swells and Harriet's overly protective husband Brian, grief-stricken about Alice's disappearance, blames Charlotte but moreso Harriet for allowing her to let the child go off with someone else.

The tension builds as time passes and Harriett starts believing she is crazy and an unfit mom. Yet suspicions turn to Charlotte, a divorced mom. Could she be jealous of Harriet and arrange to have her child abducted as some crazy form of malice?

Harriet distrusts everyone but needs Charlotte to give her answers. Can she trust her friend after she slandered her for not taking better care of Alice? Yet Charlotte is the only one who can help her untangle this scenario. Secrets are exposed as this psychological thriller climaxes, leaving Charlotte astounded.

The narrative is full of twists and turns with simultaneously occurring revelations, yet some aspects of the plot appear evident from the onset. The past and present are intertwined, which is a bit disconcerting as it offers the voices of both protagonists, yet in the scheme of things, everything blends well together.

Do we really know those friends we are close to, and how many of us withhold secrets that do not get revealed until a tragedy occurs? The ending is shocking and totally unexpected.