Her Kind of Trouble 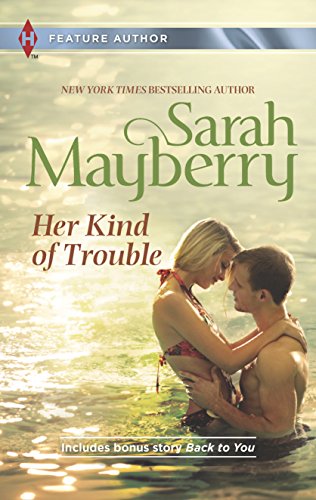 “. . . a passionate, psychologically astute romance with a hero and heroine who are both charmingly flawed. The pages practically turn themselves.”

As Her Kind of Trouble opens, Vivian Walker’s sister marries Seth Andserson’s brother. The wedding of the gilded pair—Jodie and Jason—only serves to illustrate the younger siblings’ failings. Vivian and Seth are the younger, freer sort, the ones whose careers won’t succeed on the first try and who won’t be sending out wedding invitations any time soon.

To toast their own freedom, their own jaded views on true love, and a red-hot attraction to one another, Vivian and Seth ring in their siblings’ wedding with a torrid one-night stand. Both leave with no regrets.

Ten years later, Vivian returns to Australia from a long stint in L.A. She and Seth have finally figured out their careers, if not their romantic lives. Their tryst from a decade ago remains their secret, although the innuendos fly at every family gathering. The sizzle is still there, but Vivian is older, wiser, and not stupid enough to do anything about it—especially after Seth inadvertently insults her character, which smarts more than it should.

But real life intervenes, throwing Seth a series of terrible curve balls. And since family is family, Vivian has to step up and help out. Over a short span of time, the two see a lot more substance in one another. Even so, their dim views on permanence and commitment will keep them from seeing all that could be, up until the very last page.

So many romance novels approach relationship conflict from the point of view that two characters are too different to stick together. But Ms. Mayberry takes just the opposite tack—Vivian and Seth are too alike to succeed as a couple. Or so they imagine. The snappy dialog and explosive interaction between them makes for a very engaging read. This is also a more sexually explicit book than many of Ms. Mayberry’s. Since Vivian and Seth are self-proclaimed hedonists, the heat level is absolutely in keeping with the story.

Like several of her other excellent titles, including The Other Side of Us and Her Favorite Temptation, this new story relies on medical drama to up the stakes. But Ms. Mayberry’s gift is realism. If the storyline steps inside the hospital, it always does so in a credible, honest way. The plot, even with a life on the line, never steps into melodrama.

Instead, external conflict keeps the pace humming along, such that the characters’ introspection rarely devolves into the sort of “should I or shouldn’t I” waffling which fluffs out the page count of so many other romance novels.

As she always does, Mayberry has delivered a passionate, psychologically astute romance with a hero and heroine who are both charmingly flawed. The pages practically turn themselves.