Her Hidden Genius: A Novel 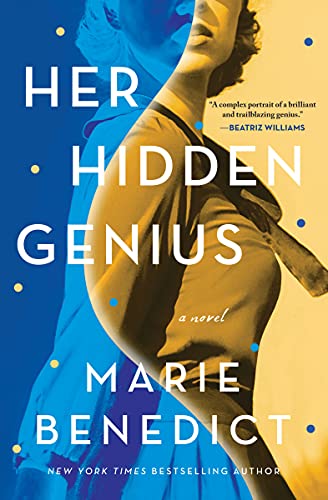 Hidden women abound in all sectors of society, nearly all cultures, and throughout history, threatening powerful, dominant men who fear losing their power and prestige. Marie Benedict, author of Lady Clementine, The Only Woman in the Room, The Other Einstein and Carnegie’s Maid, has gifted readers of historical fiction with her latest book about Rosalind Franklin, the brilliant scientist who unlocked the mystery of DNA and so scared the senior men in her lab that they resorted to stealing her scientific work and claiming it as their own, for which they received a Nobel Prize.

An English chemist and X-ray crystallographer, Franklin’s work began with understanding the structure of coal and graphite. Later her work became critical to the understanding of molecular structures of DNA, RNA, and viruses. Driven by a deep commitment to the principles of science, she tirelessly investigated the natural world, her work encompassing biology, chemistry, and physics, ultimately focusing on research that was deeply meaningful to society. It is because of Franklin and the protegees she worked with that today’s researchers can use tools like DNA sequencing and X-ray crystallography to investigate viruses like Covid 19. That’s what makes the actions of Francis Crick and James Watson so outrageous.

“Of all the women I’ve written about, I feel like in many ways, Rosalind Franklin’s story is the least known,” says the author. “She made such an enormous impact. Her legacy is so vast that she seemed like the perfect fit.”

In her typical fashion, Benedict brings to life Franklin’s personality as well as her skill. Known as brusque and in today’s jargon, free of filters, she rejects marriage and motherhood, as well as her wealthy family’s noblesse oblige philanthropic activities, seeing them as completely incompatible with a life in science. Nevertheless, she falls hopelessly in love while working in Paris, a romance that ends abruptly when Franklin discovers her lover’s infidelities. These events may be fictionalized, but they make for a well-rounded character, and a very good read.

Her years in a Paris lab are pure heaven for Franklin, who experiences a comradery and egalitarianism not to be found in the U.K. She is quickly recognized and lauded for her intellect and enjoys a social life not to be repeated when she accepts a position back in London after six years of professional and personal bliss.

It is there, at Kings College, that Franklin and her assistant do their crucial, and appropriated, work on DNA. And it is there that she is a pioneering STEM woman who faces down misogyny to the very end. In one brilliantly imagined exchange with Watson, caught in the act of coopting her work, she grills him with questions he cannot answer; he slinks away like a wave of melted iron.

In another exchange, Franklin reveals her character as she tells a beloved cousin/friend of the professional abuse she has endured. “I would not erase those years to spare myself the torment,” she tells her cousin, who can’t understand the depth of her commitment. “Science is life, dear cousin, and it is the next best thing to religion I have. It is the lens through which I see and experience and make sense of the world around me, and it is my way of giving back.”

Made ill by years of radiation exposure, Rosalind Franklin’s life was cut short by cancer when she was only 37 years old. Her tombstone in London’s Willesden Jewish Cemetery bears the word scientist, followed by the inscription, “Her research and discoveries on viruses remain of lasting benefit to mankind.”

One can only imagine what more she could have given back to the world. One can also hope that Marie Benedict will continue to honor hidden women with her beautifully crafted and carefully researched historical novels that bring them to light.