Her Every Fear: A Novel 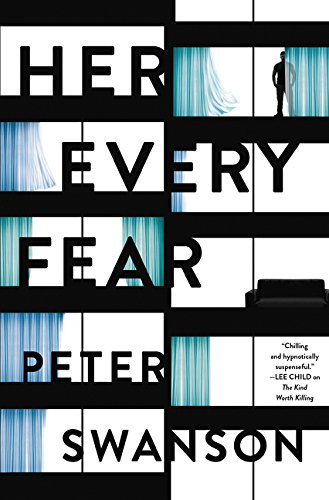 “Ultimately the people who love Swanson’s work will remember . . . his uncanny success in sculpting demented yet hyper-intelligent villains who always upstage the good guys . . .”

If an editor told Peter Swanson at some point that he had to create likeable “characters to root for,” he mostly ignored that direction in his first two books. In The Girl with a Clock for a Heart, the nice college boy protagonist isn’t nearly as compelling as the girlfriend who’s probably planning to get him killed. In The Kind Worth Killing, the female villains turn their male victims into hapless pawns with a series of eerily fascinating moves. Only a pure sociopath would want these ladies to succeed, yet it’s impossible to look away from the terror they cause.

Thanks to the success of both books, many thriller fans are apt to view Swanson as an expert at crafting the kind of femme fatales who turned films such as Double Indemnity and Body Heat into classics.

They’ll be in for a big surprise, however, as they turn the pages of the upcoming Her Every Fear, a woman-in-jeopardy story in which the bad people are men. Yet once again they’ll revel at Swanson’s ability to create charismatic villains who spark fear by the evilness of their deeds and because they look like people we see every day.

The story opens as London resident Kate Priddy travels to the Boston apartment she’s borrowed from her dashing cousin, Corbin, whom she’s never met in person. Kate, who’s prone to anxiety attacks thanks to a deranged former boyfriend, quickly learns something terrible may have happened to the woman occupying an apartment across the building’s inner courtyard.

Within a matter of hours Kate finds herself cooperating with detectives who eventually put Corbin in their crosshairs as the suspect in a series of gruesome murders. Corbin seems nice enough in the back-and-forth emails between them, so Kate hopes he’s innocent despite the increasing indications he might not be. As the days go by she also develops a sense that she’s in danger as she learns about Corbin’s secretive relationship with the woman across the courtyard and makes a disturbing discovery in Corbin’s space in the building’s basement storage room.

Turns out she’s right. Because across the ocean Corbin is caught up in a nightmarish situation driven by his own psychological instability and a horrifying crime in his past. In trademark Swanson fashion, Corbin becomes the patsy in a twisted series of thrill murders that call to mind the best moments in Hitchcock’s Rope. In this case the master manipulator, Henry Wood, is every bit as creepy as the bad women in Swanson’s earlier novels.

In fact it’s in these scenes between Corbin and Henry where Swanson’s strengths as a craftsman of evil truly shine. From their first meeting the handsome, charming Henry deftly identifies Corbin’s insecurities and knows exactly how to exploit them. As a result Henry’s able to murder women for the thrill of it and with the additional satisfaction that comes from manipulating Corbin to be a co-conspirator or suspect in every death.

The impact is chilling and memorable as we learn about the deaths of the women and the increasing threat against Kate. From a sexual encounter with a man who had a disturbing connection to the woman across the courtyard, to her discovery of clues that Corbin is as dangerous as the detectives believe, Kate moves ever closer to a violent confrontation amplified by the very worst of her fears.

While this book will undoubtedly earn Swanson an expanding number of fans, the droves who loved The Girl with a Clock for a Heart and The Kind Worth Killing might be surprised by the more languid pacing in Her Every Fear. It’s a very different kind of book, more reminiscent of Daphne du Maurier’s gothic storytelling than the stiletto-sharp prose that’s led readers and critics to compare Swanson to James Cain.

This isn’t a criticism. It’s an acknowledgement of Swanson’s ability to appeal to different kinds of readers—including those who enjoy deeper layers of character and blurred lines between good people and bad. Ultimately the people who love Swanson’s work will remember one element that never changes: his uncanny success in sculpting demented yet hyper-intelligent villains who always upstage the good guys and linger in the mind long after the curtain comes to a close.