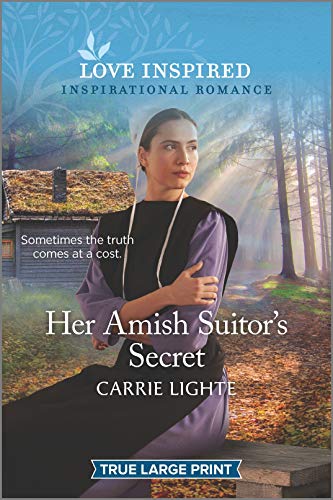 Caleb Miller, an adjunct professor at a Madison, Wisconsin, college heads to the Chicago suburbs during the summer break. He's concerned about his brother Ryan who recently got suspended from his job as an archivist in a city museum after a million dollars' worth of rare coins went missing, and Ryan is considered the main suspect. Adding to Ryan's stress is his impending divorce from his wife and the possible loss of custody of his six-year-old son Liam.

In early June, Ryan receives a note postmarked, Serenity Ridge, Maine—an Amish lakeside camp. The letter states: "If you can't find what you're looking for within walking or canoeing distance of your cabin, it isn't worth finding."

Written on the other side of the paper are these words: "Matthew 6:19-21. 'Lay not up for yourselves treasures upon earth, where moth and rust doth  corrupt, and where thieves breakthrough and steal: But lay up for yourselves,  treasures in heaven, where neither moth nor rust doth corrupt, and where thieves do not break through nor steal: For where your treasure is, there will your heart be also.'"

Ryan believes this cryptic message is a clue to where the coins are hidden. He remembers Caleb spending his college summer breaks working at an Amish farm. Since he was a German-language major and learned the Amish dialect, which is closely related to German, Ryan hopes Caleb will agree to go to Maine to look around and hopefully exonerate him.

The FBI has scoured the camp and all the cabins and came up empty though the owners are reluctant to be involved, not just because the Amish are a peaceful group, they fear the FBI's presence would hurt their business.

Ryan phones there only to learn they are booked for the summer, but also finds out they need a handyman. This would be Caleb's entrance to the property and give him a chance to look around. There is one caveat: Caleb must pass himself off as Amish. Remembering the summers he spent at the Amish farm and how much he loved the work and the people, he questions if he could make them believe he is one of them.

Nancy and Sol Petersheim, the camp owners, welcome Caleb with open arms. He is provided with a small, sparsely furnished cabin, and after unpacking his meager belongings, he heads to the lake. There he meets Rose Allgyer, Nancy's niece, who is also employed with them for the summer. From their first encounter, Caleb finds Rose prickly like her namesake and determines to stay away from her.

When Sol's medical condition forces him and Nancy to travel to Ohio for extensive care, Caleb, Rose, Hope, and Charity, the Petersheim's twin teenage daughters, and Eleanor, a young woman employee, to run their business.

Caleb checks out the area without arousing suspicions and finds he must catch himself around the others so as not to give his identity away. At odd moments he says something to cause the women to give him a questioning look, but they pass it off thinking things are different in Wisconsin.

The labor is demanding, but Caleb enjoys the outdoors and manual labor. As time progresses, and he gets to know Rose better, he appreciates how hard she works. Somewhat reticent, she does let comments about her life slip.

Rose tells him about Baker, a man she was engaged to who stole money from the restaurant she owned forcing her to close. So she came to Maine to escape the man she could not trust and earn enough to go back to Pennsylvania and open a café after Labor Day.

Both Caleb and Rose are in their thirties and considered "old" to be single, but the twins decide to find ways to get them together. Though their touchy start is now turned to friendship, Caleb cannot consider a romance with Rose for he is not Amish.

Rose, testy about being unmarried and wondering if she'll ever marry, gets indignant when a camper states after enjoying her pie, "You'd be wise to take good care of a wife who cooks and looks like yours does!"

"Caleb is not my husband and I don't need to be taken care of! Fuming, Rose ducked out of the room.

"As Rose disappeared into the kitchen, Caleb cringed. He understood the man intended to pay her a compliment but even by Englisch standards, his remark was boorish. It was sexist. And by the way the nape of Rose's neck turned from tan to red, Caleb recognized how rankled she'd be by it. He wishes he had spoken up in her defense, but it all happened so fast. Besides, what would he have said? Rose isn't my wife, but I'm blessed to know her for reasons other than what she looks like or how she bakes? That only would have embarrassed Rose more."

The hot, languid days pass quickly, and Caleb helps Rose harvest the fruit and vegetables that she sells at her farm stand. And she gets the chance to make some extra money baking pies for a nearby inn that are a big hit. She is delighted to find she is getting closer to her monetary goal, yet she has come to love the camp and is starting to have feelings for Caleb.

He adjusts to his new surroundings and "family" very well, attending church services, speaking the lingo, and dressing the part. His only problem is his inability to find the coins or any clues regarding them. Also, he is becoming smitten with Rose even knowing it's helpless.

When a mishap occurs and rent money is missing, Rose confronts Caleb. He gets irate and an argument ensues with him deciding the heck with trying to help Ryan. He just wants to leave. But Rose offers him a thoughtful and sincere apology:

"Caleb was moved by Rose's words and pained by her tears. How was it possible he could be so angry with her one day and want to take her in his arms the next? He'd never experienced anything like this in a relationship before. Oh, he’d experienced his share of arguments, but he'd never received an apology like Rose's, perhaps because he'd always run away instead of reconciling. He intended to run this time, too, but Rose's contrition changed everything."

Meanwhile, when Rose's farm stand gets trashed, she is not only exhausted from all her efforts but depressed too:

"It was probably an Englischer, she grumbled to herself. It must have been one of the tourists she'd seen slowing their cars to photograph her in the fields lately—the local Englischers were too respectful to snap pictures or destroy property like this. Rose sighed. Sometimes it felt like for each step she took forward, she took two steps backward and three steps sideways, getting further and further from her goal, and it made her wonder if Gott really wanted her to have a business of her own after all."

Her Amish Suitor's Secret is book number three in the Serenity Ridge series. This novel gives insight into the peaceful and God-fearing Amish sect who are taught to love and forgive. It gives the reader some mystery, humor, and romance. The storyline is credible and stands well on its own, though it would have been informative to include a glossary with definitions of the Amish vernacular. The scenery and lifestyle are serene and welcoming as well as the characters with their gentle existence and kind ways.