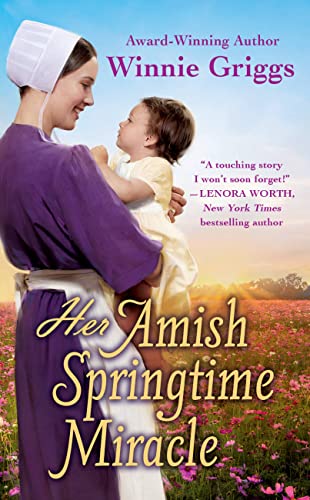 The Amish, known for being peace-loving and reticent, believe first and foremost in family and community. The men manage a business, whether tending their farms, working at skilled labor, or operating a retail shop. In contrast, the women nurture their offspring and handle homemaking duties—their greatest pleasure is raising children.

With children being such an integral part of their life, it is easy to understand Hannah Eicher's heartache when she learns she cannot have them. Though dejected, she reconciles herself to being a spinster and living without a husband or babies of her own.

One day her father and brother discover a baby abandoned in their barn with a letter addressed to Hannah, asking her to care for the infant for the father left them, and the mother cannot do it alone. Her note asks to raise the child "plain," believing this is for the best. Could this possibly be an answer to a prayer for Hannah?

Hannah is thrilled and falls in love with the little girl she names Grace. Though she is single and devoted to Grace, things aren't easy. However, the Amish are known to help each other.

She goes through the system to adopt Grace, which takes patience and perseverance. In the meantime, as Grace's foster mom, she profoundly believes God has given her this blessing, and the adoption will happen. A year passes, and it looks as though Grace will legally be Hannah's.

Working at her bakery, a young man English man appears and introduces himself to Hannah as Mike Colder. They chat, Mike mentions he's a paramedic and is in town on business. He is searching for his sister Madison's baby—though he does not disclose this information.

Not long ago, Madison and his stepmother mother perished in an accident, and he found Madison's journal where the words "I'm pregnant" jumped out at him. She never told him about this, and he is concerned about the baby's whereabouts—the child Madison named Buddy. Knowing she had been living in this area, he checks at some local fire stations, which are places where unwanted babies are left.

Mike is charmed by Hannah and her "plain ways," her sunny disposition, and her desire to help others. He observes Hannah's interplay with Grace making him admire her more. He wonders who the father is. Is Hannah a widow? But it is not his place to ask.

After stating his profession, Hannah asks if he could provide first-aid training for her and her fellow store owners in case of a medical emergency. Because of her kindness to others, Mike wants to make this happen. He meets firefighter Ford at the local department when he asks about abandoned infants. They start a friendship, and Ford agrees to offer a class for the shopkeepers.

Mike invites Hannah to lunch to discuss this. Hannah piques his interest, but he does not confide he once lived in Hope Haven and was raised "plain," but when his dad was banned when Mike was seven for reasons Mike never knew—it was a situation leaving him bitter toward the Amish.

As they talk, he learns about Grace:

"He sat up straighter. 'You're not Grace's birth mother?'

"'Nee.' She stiffened. 'I've never been married. Have you thought all this time that I've acted shamefully?'

"'I thought you were a widow.' His mind was trying to shift to the new reality. 'So, Grace is adopted?'

"'Not yet, but it'll be final in a few weeks.' A shadow dimmed the light in her eyes for a moment. 'I can't imagine what my life would be like if Grace wasn't in it.'

"How did a young, single Amish woman end up adopting a child? 'Is she the daughter of a relative or a friend?'

"'Aren't all children gifts from God?'

"'For sure and certain. But this was a very special kind of miracle.'"

With this conversation, she relays how she learned she could never bear children. He feels her pain, especially seeing how much she loves Grace. He never considers Grace as Madison's, for her baby is a boy she named Buddy.

Soon the slow pace and camaraderie of the townsfolk appeal to Mike. While there, he helps Hannah deliver pastries to a restaurant and, on Monday, accompanies her to the local nursing home, where she brings her fresh-baked treats and takes extra time to mingle with the residents. The more time Mike spends with Hannah, the more he admires her, mainly her interactions with Grace. But he cannot let himself be swayed by her. He is on a mission, and he will leave as soon as he finds his nephew.

As Mike searches for Buddy, his heart warms more toward Hannah and Grace:

"How deep did his feeling for Hannah really go? There was no doubt he admired her and was even attracted to her. That moment when he'd touched her cheek was proof of that. He still remembered the warmth and softness of her skin, the way her remarkable eyes had widened, and the trust and something more reflected in her expression. In that moment, he'd longed to protect her, to be his best self, so he deserved her trust.

"But there was more to her than that one moment. She was sweet but knew how to stand up for herself and others. She was generous with her time and talents and had a genuine caring heart, but she wasn't a doormat. She could be stubborn and push for what she wanted, but she was never mean.

"She was the first person he thought of when he had news to share, and he sought her opinion when he had a decision to make.

"Was that what love felt like? He wasn't sure. But he did know he'd never felt like this about anyone else."

Though somewhat predictable and drawn out, suspense and discovery make this story a heartwarming read. Though Amish are considered "different," they are more alike in many ways to any other populace. Their beliefs are the central part of their lives, and once they've made a vow, they stick to it and believe God will show them the way, no matter what situation may occur.

Mike has had to deal with many lies and disturbances in his life, and it's easy to sense his distrust in a community where he once belonged and was happy. Falsehoods and secrets cause more harm than good, while trust and belief show the way. Will Mike locate his nephew? Will Grace's adoption go through? Can Hannah and Mike find a way to be together?

Book 2 in the Hope Haven series offers food for thought and insight into the Amish way of life, displaying Hannah’s desire to raise a child without giving up her principles. Hannah's belief shows miracles can happen.