Henrik Ibsen: The Man and the Mask 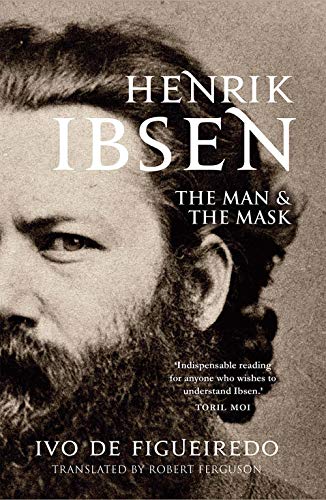 Ivo De Figueiredo has written several books on the life and work of Henrik Ibsen, and his latest and most comprehensive portrait of the larger than life man, his times, and his singular creative journey that produced a body of work that radically changed international theater. The lengthy biography has been expertly translated into English by Robert Ferguson.

Ibsen was the unlikeliest of writer to came to fame against the backdrop of political upheaval in Norway. At various times, he both entranced and alienated Norwegians—colleagues, academia, aristocracy, bohemians, literati. Meanwhile, he was admired by international celebrities, everyone from composer Edvard Greig to a young James Joyce, and he remained a popuar hero in Norway until the end of his life.

Even with some dense academic theorizing (among other tangents by the author) this biography has such authority and scope, it is perhaps the most assessable source to date on Ibsen’s life and work.

Ibsen’s classic dramas made him a national hero in his native country Norway, even as he railed against the mores, politics, hypocrisies, and society, publically and on the stage in such plays as A Doll’s House, Pillars of Society, The Enemy of the People, Peer Gynt, Ghosts, The Lady of the Sea, The Master Builder and changed theatrical literature forever. Ibsen was a symbolist, satirist, polemicist, and realist who confronted his own flaws, even as he didn’t do much to change them. He was full of complexities, contradictions, and dualities, which de Figueiredo goes into in rigorous depth.

Ibsen was equally reviled at various stages of his life. He built his life and career outside of his birth country, with his wife Suzannah and son Sigurd, living as expats in Rome, Munich, Dresden.

De Figueiredo tracks Ibsen’s long artistic journey his beginnings as a young man who kept to himself in the provincial town of Skien, Norway. His father was a very successful businessman who lost everything due to reckless investments. Meanwhile, young Henrik was in a world of his own as a visual artist and puppeteer, first delighting his family, then the neighborhood.

In his late teens, Henrik became an apprentice pharmacist in his uncle’s apothecary. In his spare time, he wrote poems and stories. Ibsen was smitten by a young woman who also worked at the pharmacy, and when she got pregnant, and Ibsen refused to take any responsibility, she had to sue him for child support.

He fled his provincial town for good at age 22 and also, for all intents, severed his ties with his family. His parents continued to struggle and eventually, their marriage fell apart. The father went on a self-destructive path, ending up broke, bitter, and alcoholic. Ibsen never looked back, first in pursuit of an academic career, and soon enough, his full life in the theater.

Ibsen became part of a literary gang of bohemians, drinking and reciting poetry in cafes every night and railing against the commercial theater in Norway that only produced light comedies from abroad for the bourgeoisie. Ibsen’s early work was rejected by the establishment theater, but a friend put up the money for his poems to be published.

Even though his first play Cataline, a historical drama, was criticized as an immature work, his contemporaries, audiences and influential critics recognized his potential. His folkloric and indigenous themes resonated with the public.

He was writing full time and became creative director of Det Norske Theater in Bergen, then was sent to Denmark to study stagecraft and innovative theater trends in Copenhagen, the center of the Scandinavian theater world. He returned and immersed himself into the theater world, with mixed success. He was a strong advocate for, among other things, improved conditions for actors, designers, and playwrights. Meanwhile, he had also fallen in love and wanted to marry a fellow writer and translator Suzannah Thorensen.

Later, Ibsen struggled to succeed as co-director of The Christiania Theater, which under Ibsen, was solvent, even though he was forced to present light comedies and vaudeville tours from France. His frustration led to not being able to finish several plays and creative stagnation. He was drinking heavily and was gaining a louche reputation around town, and he was heavily in debt. He was creatively frustrated and wanted out.

Even with respect from Norway’s literati and his growing national fame, Ibsen was living on the edge financially and professionally. He was at the forefront of Norway’s nascent indigenous theater community as a writer and director, but the establishment theater treated him as if he were completely expendable.

European actors, playwrights, and directors were developing a more grounded theatrical realism from the less mannered, declamatory style that audiences were used to. Ibsen too was looking to reflect Norwegian cultural identity with elements of Norwegian folk tales, symbolism, and more relevant dramas.

His breakthrough came with Brand, Ibsen’s verse play, that was heavily criticized and rejected by academic critics, who continued to debate its merits. But it was completely embraced by the public.

Ibsen early on established that his plays should be published before they premiered onstage to prevent pirated productions. Throughout his career, he fought to establish copyright and royalty protections for authors.

Ibsen had a string of successes with another popular play, The League of Youth and The Pretenders, which made him a national celebrity and, when the texts were published, they sold out. Ibsen was not only able to pay off crushing debts that almost landed him in prison, he became a rich man. He sought out official recognition that would enhance his reputation. His egotism, vanity, and greed were on display.

He was also becoming engaged politically in his actions and through his plays. He railed against Norway when his country did not join in the fight to defend Denmark from German attack after the Danish King died in 1864 and Germany seized control.

He went into self-exile until the last years of his life, visiting Norway rarely, mostly for business purposes or to oversee productions of his plays. Ibsen, Suzannah, and their son Sigurd spent decades in either Rome, Munich, Dresden or bucolic summer retreats in Italy, France, and Germany.

In Rome, he benefited in part by government artistic grants and support expedited by his literary rival and friend Bjornstjerne Bjornson, who encouraged him to regroup artistically in Italy. The experience changed his life and his work.  Ibsen would return to Italy for the rest of his life. Meanwhile, European actors, playwrights, and directors were developing a more grounded theatrical realism from the less mannered, declamatory style that audiences were used to. Ibsen became a chief advocate and voice of this aesthetic movement.

One of the most intriguing parts of the book is de Figueiredo’s full analysis of the social impact of A Doll’s House. It was a huge success even as it scandalized all of European society. The protagonist Nora not only walks out on her husband Torvald and their children, she questions her relationship with religion and all of the misogynist mores of a patriarchal society.

Even more sensational was Ibsen’s Ghosts, which followed and was just as scandalous, with themes a young man who is dying from the ravages of congenital syphilis, church hypocrisy, and the revelations of incest in his family. It was at first censored, but it was eventually an artistic and commercial success.

Then came Hedda Gabler, which dealt with among other things, sexual blackmail, adultery, brothels, and suicide. Its startlingly frank dialogue by Hedda reveals a passionately cold heart as she mocks and laughs at her naïve husband fantasizes about sex and holds other women in contempt. The psychological depth Ibsen achieved in his late career plays, as well as his structural craftsmanship, continued to be groundbreaking.

He and his wife remained together until Ibsen’s death in 1904, though his marriage to Suzannah was often turbulent, because he was controlling and expected his wife to abide by his wishes. Suzannah tolerated Ibsen’s egomania, his drinking, and philandering by De Figueiredo’s account, stoically, even as Ibsen was emerging as a proponent of the 19th century women’s rights movement.

Analytical tangents throughout the book concerning Ibsen’s plays can be a bit heavy going in terms of the flow of the book. On the occasion of Ibsen’s 70th birthday, he expressed his desire to write his autobiography that “links my work with my life.” Over a century later de Figueiredo goes a long way in fulfilling Ibsen’s desire. De Figueiredo’s end chapters paint a poignant portrait of a literary lion in winter, accepting his accolades and still roaring the loudest.