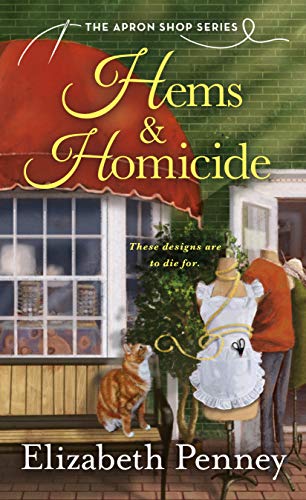 “This is a fun book to read. It moves quickly and logically in spite of the many clues Penney throws in Iris’ path. It’s a fast read, perfect with a cup of tea on a cold afternoon.”

Cozy mysteries are named such because they are like comfort food for the reader. No hardcore sex, murders occur off stage (for the most part) and they provide good puzzles for the reader to pick through and try to get to the solution before the main character does.

In Elizabeth Penney’s latest cozy mystery, Hems and Homicide, she accomplishes exactly what a cozy is meant to accomplish: a good puzzle with a good number of characters, each of whom could fit the bill as the perpetrator, and a strong number of clues to send the reader off in many directions.

Iris Buckley has moved back to her hometown of Blueberry Cove, Maine, after establishing her online business in New York. Her beloved grandfather, Joe, has passed away, and Iris has moved back to provide comfort and assistance to her grandmother, Anne. Iris’ skill as a seamstress and a businesswoman quickly becomes apparent as she and Anne set up a storefront business to coincide with the online business.

One day as they are cleaning and prepping their location for a grand opening, Iris stumbles, literally, on a surprise in the basement: a skeleton that falls out from behind a shelf unit. To her horror, Anne realizes that the skeleton is the remains of an old friend of hers from the 1970s: Star Moonshine.

The police enter the scene and quickly determine the victim was murdered; the opening is put on hold, and very soon Anne is pegged as a possible suspect in Star’s murder. But Iris and her best friend, Madison, are having none of this. And the search begins for the real murderer.

In the meantime, Iris’ landlord, Elliot Parker—a womanizer and a distinctly difficult person who covets property owned by Anne, is found dead in the middle of Iris’s new store. Anne is found hovering over Elliot’s body, and the police quickly eye her as the killer. And the opening is, once again, put on hold.

Through Iris’s research to learn more about Star, she finds out that her grandfather and several other townsmen had formed a rock band in the ’70s, and Star had been one of the groupies following the band. Of the band members, only two had passed away, the others had grown up and become businessmen within the community. Learning that several of these men had dated Star, and Star’s ex-boyfriend had made an appearance at the time of her disappearance, Iris focuses her search for the real killer on one of these men or perhaps one of their descendants.

Was there a connection between Star’s death and Elliot’s as well? Elliot was one of the, but not the only, band members who dated Star, so the connection is there.

A clue surfaces when Iris and Madison learn that Star had lived at a commune in the ’70s, not far from Blueberry Cove. They visit the area, and more secrets surface. Throw another bug into the ointment, and Iris learns that Star had had a child that she gave up for adoption. Could this child, now an adult, have been Elliot’s child, and could this child have something to do with Elliot’s death?

As she moves forward with her investigation, Iris seems to raise more questions than resolve two murders. And yet, Penney makes the story flow well. Her clues for Iris to follow are clear, her red herrings well placed, and her foreshadowing clearly establishes things to come.

Iris investigates the backgrounds of each of the band members, the groupies, and their families, searching for any information that will clear Anne of all suspicion, and reveal the identity of the real murderer. Penney raises the story to a high level of excitement as Iris finds herself face to face with the murderer and all of the questions raised are answered.

Hems and Homicide moves quickly and logically in spite of, or perhaps because of, the many clues Penney throws in Iris’ path. This is a fun book to read. It’s a fast read, perfect with a cup of tea on a cold afternoon.