The Helm of Midnight (The Five Penalties, 1) 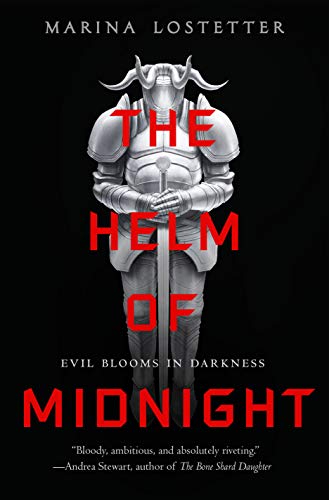 “master craft level of world building that offers much more to the fantasy genre than the usual fare.”

A world created by mysterious gods filled with a variety of fanged, winged, and clawed death. A great valley made to house the frail humans who cannot survive in the hostile environment beyond and a wall of magic surrounding the valley to keep the monsters out. The is the world of The Helm of Midnight and it is a firecracker.

Krona is a Regulator (a cross between a midlevel knight and a police detective), for the great city of Lutador in the country of Lutador. She is a conflicted woman who suffers from vargerangaphobia, a paralyzing fear of monsters called Varger, elemental bear/wolves that embody a particular emotion ranging from love to despair. On her watch a valuable, and horrible, relic is stolen, the Mayhem Mask of the famed serial killer, Louis Charbon.

Masks are magical items that house the knowledge/talents/skills or memories of the people society deems valuable. They do this so their talents are not tossed into the dustbin of history, preserving them so when a person wears mask, the wearer, for a time, are endowed with those talents. The mask of Louis Charbon, a dark and evil relic, was crafted in secret by an unethical Enchanter, and thus was held by the state as a cautionary item.

This is the world of The Helm of Midnight, where emotions can be infused into gems and even time can be collected like taxes and used as the coin of the realm. The gods are an ambiguous lot the with names like Zhe, She, Fey, He, and They and are the children of the first elemental god, the Thalo, who is often seen as a terrifying entity, if not downright evil, with little regard for human beings.

With this as a backdrop, Lostetter sends the reader right into the action, diving deep into a murder mystery as well as flashbacks into the emergence of Louis Charbon as a serial killer who crafts his victims’ corpses into a semblance of flowers. A gruesome touch to add to serial killer lore.

What makes this book a captivating read is not merely the tight prose and exquisite use of language to create tension, but the master craft level of world building that offers much more to the fantasy genre than the usual fare. Unlike Donaldson’s generic The Land, to the hyper-realized marvel of Tolkien’s Middle Earth, the Valley, comprising the countries of Marrakev, Lutador, Asgar-Skan, Winsrouen and Xyopar, is a unique microcosm of humanity set in a wasteland of barely breathable air and ferocious monsters, protected by the magic wall. Every now and then one of the immortal vergers pierces the protective magic and rampages across the countryside until the Regulators can contain them.

The first of a series, The Helm of Midnight offers readers so much more than what is currently available, bringing a fresh voice to a genre that has become a little stale as of late. Don’t pass this one by, it’s too good.