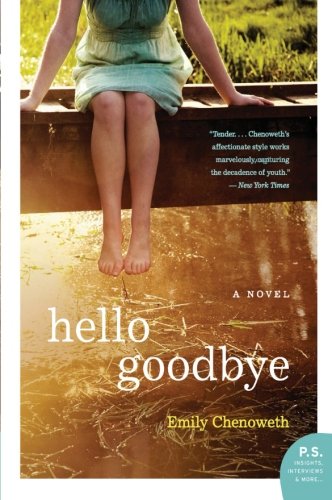 What do you do with the news that your wife’s brain tumor is terminal and she has nine months to live? If you are Elliot Hansen, you keep it a secret, knowing you are stuck in a space where “there was nothing you could do and yet you could not do nothing.”

What he does instead of telling his wife Helen and daughter Abby the terrible news is plan a part vacation part 20th wedding anniversary celebration at a resort in northern New Hampshire. He invites some old friends to join them, keeping the secret from them, too. “So he had summoned their friends to this place where they would eat and drink and reminisce, and when they left, they would say, for the last time, goodbye.”

Ms. Chenoweth switches between Elliot’s Helen’s, and Abby’s point of view, putting us inside the minds and often the hearts of these integral characters. The changing point of view may raise a question about whose story this is. Is it Helen’s, whose terminal brain cancer is the reason for bringing this entourage together? Or ever vigilant Elliot’s, withholding the terrible secret of Helen’s looming death from her and Abby? Or is it Abby’s story, struggling to hold on to and recreate the mother she adores, embarrassed at times by the mother diminished by cancer? Helen and her brain tumor are clearly at the center of the story, and yet it’s not always clear if she is the main character.

Hello Goodbye opens with Helen returning from her morning run, willing the coffee machine to speed up, mentally running through her busy day as a counselor at the county juvenile court, unaware the pain she rubs at in her temple is a tumor about to explode in a flash of light and color and totally disrupt her world.

She is never told her cancer is terminal, yet as she ties a scarf over her bald head, or struggles to find the right word, or splashes childlike in the water, or naps when routine tasks exhaust her, it’s heart wrenchingly clear that on some level she knows.

Elliot’s love for his wife and daughter often comes off in over-protective thoughts, comments or gestures. He continually refers to the Presidential resort as "the best hotel in New Hampshire” driving Abby crazy while revealing his desperation for this final family vacation to somehow be perfect. He chain smokes and hovers, all the while knowing “in the story of his and Helen's marriage, the end had already been written. But the path to that conclusion was still left to forge—how the days and weeks would go, and what solace and joy would be found in them, were in many ways up to him.”
Viewed from Abby’s point of view, Hello Goodbye is a coming of age story. She wanders the hotel grounds often bored and resentful, flirting with a handsome young waiter, hoping for romance or at least friendship.

Ms. Chenoweth poignantly captures Abby’s denial and dawning realization of the seriousness of her mother’s illness in the game she frequently plays in her head. Reminiscent of “don’t step on a crack, don’t break your mother’s back,” she makes deals, if I can do this thing whatever it is, then mom will be ok. It is heartbreaking when Elliot finally shares her mother’s prognosis with her.

At a time when Abby and Helen most need the person they’ve always turned to, relied on and confided in, neither of them can find comfort in or comfort the other since, technically, Helen still doesn’t know she’s dying.

Ms. Chenoweth’s language strikes a balance between lyrical and transparent. Occasionally the pace is slow. Chapters go by with little happening: Abby roams the resort shyly flirting and seeking to fit in; Elliot chain smokes, drinks, and hovers; friends arrive, eat, drink, and try to be merry.

In the end, it is in the pacing of these details of daily life that Ms. Chenoweth puts us inside the process of dying. There are many moments that are achingly tender, and Ms. Chenoweth avoids sentimentality, handling emotions with grace and consummate skill.