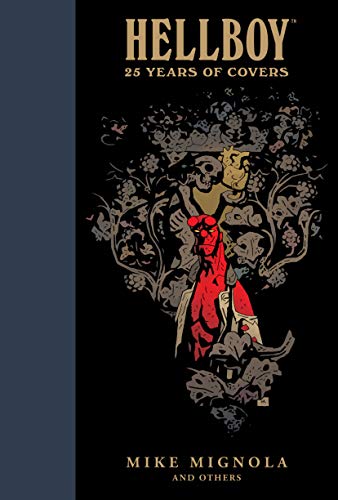 Hellboy is a comic book icon. The hulking superhero has spawned an entire industry of spin-offs, novels, movies, and cartoons. Forged from the imagination of Mike Mignola, the cigar-chomping demon looks like the monster reincarnation of Dirty Harry. Hellboy: 25 Years of Covers by Mike Mignola (and others) collects spellbinding images from 1993 to present.

Mignola’s creation is iconic because of his bizarre appearance: bright red, sawn-off horns, muscles barely contained in a trenchcoat, a tail, and a prominent underbite. The Mignola style remains equally iconic. At first blush it seems deceptively simple. Images constructed from a few lines and solid color blocks giving the picture a flat posterized quality. The Mignola style has become as instantly recognizable as a Kirby or Steranko.

Hellboy made his first appearance in an issue of John Byrne’s Next Men in 1993. After working for the Big Two (DC and Marvel), Mignola decided to strike out on his own. As Mignola relates, “Going way back—in 1982 I first moved to New York to try and get work at Marvel Comics, my portfolio was all single-page illustrations . . . I had no sample pages, as I wasn't looking for work drawing actual comics. I was trying to get work as an inker.” He later explains how “I’m almost drawing the cover long before the interior of a comic is drawn, so most times I don’t even know what the actual comic is going to look like.” This has led to many covers appearing as “symbolic covers” instead of “action covers.”

Hellboy: 25 Years of Covers has plenty of Mignola cover art. These include variant covers, crossovers, and Christmas specials. There is a cover with Hellboy and Batman teaming up, along with a cover of Hellboy and The Goon. But the covers aren’t a Mignola monopoly. A sign that a pop culture franchise has staying power is when it is handed over to other artists.

John Gianni (of Prince Valiant fame) creates a cozy image with Hellboy and a knight dining in front of a fireplace. The black and white image done in pen and ink looks like it came straight out of Eerie Magazine. Geof Darrow lends his trademark style to a couple of Hellboy Winter Special 2017 covers. Unlike Mignola’s solid color blocks and spare lines, Darrow’s line art has a hyper-detailed surrealism.

Dave Stewart, who penned the Foreword to Hellboy: 25 Years, has been the colorist to both Darrow and Mignola. Paolo Rivera creates a luchador poster for Hellboy vs. Lobster Johnson. It has the gloss and draftsmanship of a fifties B-movie poster.

Dark Horse has a crafted a glorious tribute to Hellboy, the character and the franchise. The meaty hardcover possesses a wonderful heft without being awkward or unwieldy. The colors pop and the pages feel nice on the fingers, all at a modest cover price. With the waning of the “phonebook” volumes and the ascent of the prestige editions, individual volumes can get a little “dollar-intensive” to the consumer.

The sensible price also reflects the source material, since Hellboy is, at its essence, a comic celebrating the lowbrow pulp aesthetic combined with occult-crazed Nazis, an undead Rasputin, and nightmarish Cthulhu elder gods ready to tear the universe to shreds. Only a demon with a giant stone hand, his pyro girlfriend, and his fish buddy Abe Sapien can save humanity. Hellboy: 25 Years of Covers by Mike Mignola turns these pulpy misadventures into immaculate art.