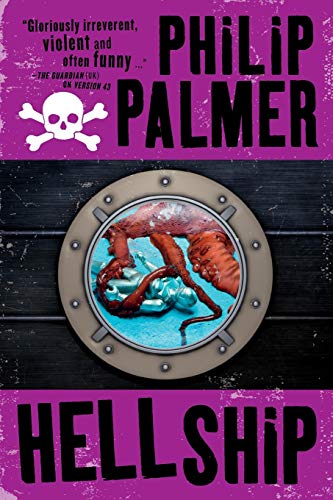 “Hell Ship is riveting, pulling you through the story with raw emotions that are both familiar and strange. The characters, no matter how alien, are accessible and relatable.”

A destroyer of planets and universes—yes, entire universes—is on the loose. Can three unlikely heroes stop them?

The Ka’un have been rifting through space, jumping from one universe to another, waging war and destroying planets as they go. They have been doing this for eons, occasionally taking one single survivor and adding him or her to their collection of “slaves.”

One such survivor is Sharrock, proud warrior of the bipedal, red-skinned Maxola. When his planet was destroyed, he was consumed by volcanic lava, felt the skin burn off his body, but then awoke within the Hell Ship. One of the Ka’un’s many powers is the ability to regenerate living creatures.

Sharrock is befriended by Sai-ias. She is a giant, squid-like creature who can swim through water, air and the vacuum of space, as well as slither upon the land. She has taken on the burden of helping new arrivals to the Hell Ship adapt to their new world and life. A pacifist by nature, she is also a consummate killer when provoked.

Chasing the Hell Ship, bent on revenge, is Jak, a one-time trader, now explorer who, after the Hell Ship destroyed his universe and killed everyone on his spaceship, lost his body and fused his mind with the mind of the explorer ship. Jak/Explorer hunt for the Hell Ship, while documenting what they can of the millions of lost civilizations they find in its trail of death.

Philip Palmer’s Hell Ship weaves the first-person stories of all three of these wildly different characters as they seek a way to destroy the Ka’un and their planet-destroying ship, taking revenge on all that this bloodthirsty race has done.

Hell Ship is not a book for the faint of heart. It is filled with colorful language, violence and shocking twists, turns and deceit. Sharrock is particularly adept at creative insults, such as “evil-bitch-that-even-a-fat-arsed-Southerner-wouldn’t-screw” or “coward-who-would-comfort-his-mother’s-rapist.” If you can’t take the F-bomb, don’t read this book.

Hell Ship is also rich with a wide array of alien species—some humanoid, others not so much. The diverse cultures and lifestyles may be alien and unfamiliar, but you’ll still see a kernel of the human experience in each and every one of them.

The tapestry of life and death that Palmer weaves throughout the book is like a roller coaster that sounds so rickety you’re afraid your car will fall off. Whenever you think you know where the story is going, he’ll switch gears and veer off in another direction. And he keeps this up until the final page … you are never sure of how it will end until the last few paragraphs.

Hell Ship is riveting, pulling you through the story with raw emotions that are both familiar and strange. The characters, no matter how alien, are accessible and relatable. The worlds are built and destroyed quickly and engagingly at the same time. When you finally put down the book, you’ll feel as if you have traversed a lifetime and now can rest.