Hell With the Lid Blown Off: An Alafair Tucker Mystery 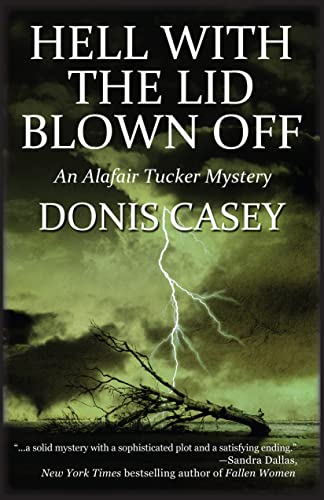 “Not only is Hell with the Lid Blown Off an excellent mystery, it is also a portrait of early 20th century rural America when family was more important than any other part of life.”

Humorous mystery, historical mystery, regional mystery, cozy mystery, or however one wishes to categorize Hell with the Lid Blown Off by Donis Casey, it is absolutely the best mystery this year in any category.

June 1916, in Boynton, Oklahoma, is hot, humid, and in some sense that Alafair Tucker’s husband, Shaw, can’t quite define, unsettling. “Puts my teeth on edge,“ he tells his wife. Alafair also finds the weather is making her uncomfortable. “Something strange was in the air, something oppressive.”

The oppressive weather of June is not the only reason that the folks in Boynton are feeling unsettled. There is talk of the United States entering war in Europe, the prospect of which most residents are at best ambivalent. Then Miz Beckie MacKenzie’s grandson Wallace comes to visit, bringing along his friend, Randal Wakefield. Not everyone in town thinks that Wallace is as wonderful as he and Miz MacKenzie think he is.

Ruth Tucker, Alafair’s daughter, doesn’t care much for Wallace, and neither does Trenton Calder, Sheriff Scott Tucker’s deputy and Ruth’s undeclared suitor. “I would no more have gone to eat dinner with Wallace MacKenzie than with Kaiser Wilhelm himself if Ruth hadn’t invited me.”

If having to put up with Wallace isn’t enough for Ruth, she must also try to avoid Jubal Beldon’s unwanted attentions. Jubal and his five brothers are called the Bedlam Boys by Sheriff Tucker for the trouble they cause in Boynton. Now Jubal has decided to pursuit Ruth, threatening to ruin her reputation with lies if she refuses him.

Ruth is not the only one threatened by Jubal’s lies, and in a small town like Boynton, lies are as good as the truth, a fact Jubal knows well. He enjoys power over his neighbors and searches out their secrets. If he can’t find any, Jubal will make them up. Not until Wallace and his friend, Randal, offer to pay for Jubal’s silence does the young thug decides to add blackmail to his desire for power.

When the tornado tears through the countryside around Boynton, it leaves behind massive destruction, horrible injuries, and death. One of the dead is Jubal Beldon, but no one mourns his loss, not even his mother or brothers. Most of Boynton, at least those threatened by Jubal, are relieved, if not elated.

Sheriff Scott Tucker isn’t dancing on Jubal’s grave, but he doesn’t think the young man is any loss to the community. Nevertheless, when the undertaker tells Scott that he believes that Jubal was dead the day before the tornado hit, the Sheriff knows that someone murdered the dangerous young man. “Considering that it’s Jubal Beldon, I got about hundred suspects,” he tells Shaw Tucker.

Alafair Tucker takes an interest in Jubal’s murder, but in contrast to her behavior in earlier books, she doesn’t personally do any active investigating. She is far too busy worrying about her badly injured son-in-law, John Lee, her daughter Phoebe who is expecting a baby momentarily, and other family members to stick her nose into the sheriff’s business.

On the other hand she can examine the hand-drawn map of the tornado’s destructive path, Jubal’s last known whereabouts, and make an accurate guess as to where he must have been murdered before his body was blown by the twister to where it was found. Alafair can do that much investigating without leaving her kitchen.

Not only is Hell with the Lid Blown Off an excellent mystery, it is also a portrait of early 20th century rural America when family was more important than any other part of life. Casey evokes a sense of place that immediately transports the reader to that small Oklahoma town in 1916 and describes in wrenching detail the devastating fury of a tornado and the human wreckage it leaves in its wake. In searching for the Tucker farm the morning after the tornado Trenton Calder is stunned: “Me and Streeter kept going northwest, but we couldn’t recognize where we were by the landmarks because all the landmarks had been blown away.”

The tornado’s destruction is a perfect metaphor for the manmade destruction done by Jubal Beldon. Both forces, unthinking, impersonal, unstoppable, feared when contrasted to the sympathetic, loving Tucker family creates the best mystery novel of the year.

It is suspenseful and gripping, with superb writing and unforgettable characters. If you can only read one book this year, Hell with the Lid Blown Off should be that one.