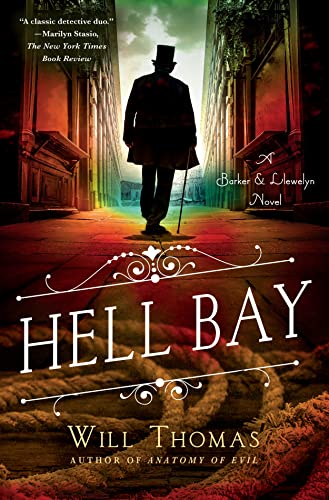 “Hell Bay is an excellent historical mystery with a strong sense of place and time, . . . complex and likeable characters, and a dark and twisted plot.”

Another page turner by Will Thomas that no fan of the Barker and Llewelyn series will want to miss, Hell Bay generates both paranoia and utter terror as a killer besieges a locked manor house.

The Royal United Service Institution’s purpose “is to monitor other nations both politically and militarily, and suggest policy to the government.” At present the Institution is behind a clandestine meeting between Lord Hargrave and the French ambassador, Michel Gascoigne, under the guise of a house party to introduce Lord Hargrave’s unwed daughters to Cascoigne’s unwed sons.

The actual purpose of the house party is to broker a treaty between England and France that will provide a united front against Germany and Russia. Such an important meeting requires security, and Lord Hargrave wants Barker and Llewelyn, London’s foremost enquiry agents, to provide it.

There is nothing Cyrus Barker dislikes more than security work. “Of all the services he offered, security work was his least favorite. Too many unexpected things could happen.”

Lord Hargrave has already done an end around such objections. Mrs. Philippa Ashleigh, Barker’s long time lady friend, has added his and Llewelyn’s names to the guest list. As her companions no one will suspect them of actually being security agents, and thus foreign spies will not suspect that the house party on Hell Bay, Lord Hargrave’s island estate, is more than a matchmaking affair.

Barker is not pleased at being manipulated. “This had better be worth my while . . . If I have to endure a week of sweetmeats and polite conversation, I’m liable to set back Anglo-French relations all by myself.”

True to Barker’s conviction unexpected things happen on Hell Bay. Lord Hargrave is killed by a sniper’s bullet, and Gascoigne’s own security agent is stabbed to death. Moreover, the boat that is the only way to reach Hell Bay has left, and the only means to recall it is destroyed. All in all, the house party does not begin well.

Barker orders all the guests to remain in the manor house with the windows shuttered and the doors locked until help can be summoned. A search of the manor reveals that one of Lord Hargrave’s rifles has been stolen from a locked gun cabinet. Lord Hargrave has been shot with his own gun.

This strategy doesn’t set well with everyone. Cascoigne is not impressed by Barker’s orders, while the Honorable Algernon Kerry defies Barker’s advice and leads a hunting party to find the murderer. “He was one of those horribly overopinionated guests that were the bane of any host’s existence.”

Whoever the murderer is, he apparently can gain entry to the locked manor house at will. He successfully adds poisonous mushrooms to the meal served the young male servants, rendering them too ill to aid in the protection of the manor. Barker is certain that the killer intended to poison the Hargrave family and guests rather than the servants.

“This is not a random person with a grievance, in my opinion,” Barker tells Llewelyn. “It is either someone who has made a long and carefully worked out plan or an actual paid killer of some kind, someone with a unique set of skills contracted to come here and eliminate some or all of us.”

It appears that “all of us” is accurate, as one person after another is murdered. The lighthouse keeper on the island is murdered; then Paul, Lord Hargrave’s elder son and heir is found stabbed to death in his father’s office behind a locked door.

The other men at the house party, led by Mr. Kerry’s derogatory remarks, lose confidence in Barker. As a result the enquiry agent resigns. Llewelyn is furious that Barker won’t defend himself against Kerry’s remarks, including a veiled accusation of murder.

Resignation or not, the bodies keep falling, and Barker and Llewelyn must catch a killer before there are more dead than living. Barker is convinced that the killer’s motive lies in the past, but he only has vague suspicions as to what that motive might be. He is certain of one thing: The answer lies with the Hargraveses.

Hell Bay by Will Thomas is reminiscent of Agatha Christie’s And Then There Were None, but with more to the motive than one man’s decision to render judgement on those he believes escaped justice. Greed, vengeance, unexpected cruel behavior, and unadmitted jealousy fuel a complex plot.

The series characters—Cyrus Barker, Thomas Llewelyn, Philippa Ashleigh—are revealing a bit more of themselves, moving the overall series storyline along. Fans of the series will not be disappointed by characters remaining static from one book to the next. This is series driven as much by character as by plot.

All in all, Hell Bay is an excellent historical mystery with a strong sense of place and time, essential for this genre, complex and likeable characters, and a dark and twisted plot. It is a book worthy of sitting up late just to finish it.