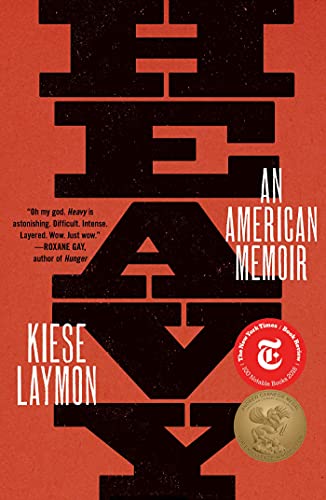 Back in 2013 Michelle Obama took her anti-childhood obesity campaign to Mississippi. She spoke at an elementary school not far from Jackson. At that time Mississippi had experienced a 13th percent drop in its child obesity rate. Years before this decline 11-year-old Kiese Laymon weighed 208 pounds.

In his book Heavy: An American Memoir, Laymon “undresses” the large young male black body. He writes with honesty entangled with sadness and shyness. Heavy is about addiction and coming of age. It’s also about a person who becomes a writer and teacher.

Laymon’s memoir consists of many conversational duets with his mother. She is a woman who believes in the importance of education. She is often physically abusive to the author while being trapped in her own painful relationship with a boyfriend. At times black parents succumb to beating their children in order to keep them out of harm’s way when they encounter the white world.

One cannot read Heavy without seeing the shadow of Richard Wright’s Black Boy covering the pages of Laymon’s memoir. Both authors are black boys trying to navigate a white world, seeking to understand the meaning and purpose of their flesh and bones. Laymon’s seeks answers in language. The reading of a short story by Toni Cade Bambara opens the door to black ways of expression. This contrasts with his mother’s constant correction of his speech and writing. For his mother who becomes a college professor obtaining an education is another way of being “heavy.”

How Kiese Laymon views his changing body is at the center of his book. He hates his body. He has difficulty being accepted and fitting in. Who would want to touch him? Playing basketball, reading and writing brings degrees of comfort.

What makes Heavy an important memoir to read is how it avoids the hallelujah path of upward social mobility. There are “dragons” living inside Laymon and his mother. Their addiction to gambling is their downfall despite educational and professional achievements. How much their problems are linked to racism might be an interesting question to ponder. What is behind Laymon’s eating and gambling? What prevents a mother and son from being honest with one another?

Heavy is a memoir that could be companion book to Roxane Gay’s Hunger. One minor flaw in his storytelling however is the mentioning of numerous book titles as if they were snacks and sweets.

If there is a major moving moment of tenderness in Heavy it comes near the end of the memoir. Laymon is teaching at Vassar and gets a visit from his father who was not around to see him grow up. Laymon writes the way John Coltrane once played ballads:

“The truth was that when my father walked his five feet eight inches 250 pounds into my office he closed his eyes and said ‘I’m so proud of you, son’ I told him I had to meet with some students before we could leave so he sat outside my office on a bench. My father sat with nothing in his hands. No books. No magazines. No cell phone. He just looks up at the empty bookcases in the waiting area and wouldn’t stop smiling.”

After all the junk food consumed by Laymon throughout his memoir this passage says “tons” about the relationship between the bodies of black men; the heaviness of love between father and son. Laymon’s father is not missing from his memoir—even while he might have been missing from his life. Maybe this is why Laymon has written an American memoir and not another black one.