Heaven, My Home (A Highway 59 Mystery) 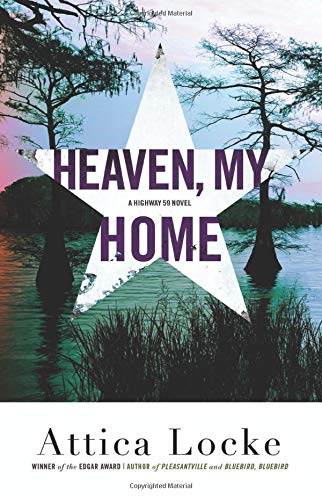 “Heaven, My Home is a well-wrought novel in the hands of a master storyteller.”

Dripping with atmosphere and laced with issues of identity, race, and heritage, Heaven, My Home is a powerful follow-up to Bluebird, Bluebird, which earned Attica Locke the Edgar Award for Best Mystery Novel in 2018.

The new story is set in 2016, during the run-up to Trump taking the White House, but the novel’s roots are nourished by events before and after the Civil War. The setting is east Texas and a lake—Caddo Lake—that straddles the border with Louisiana.

A nine-year-old has gone missing. Levi King is the son of a known member of the Aryan Brotherhood. In fact, the kid’s father, Bill “Big Kill” King, is doing time on a “slew” of drug-related charges. And Bill King’s wife has taken up with a low-life grifter.

Texas Ranger Darren Matthews, who is black, is tapped to head to Lake Caddo and find the boy. And more, if possible. But the timing is hardly right. Darren is trying to stabilize his marriage to Lisa. There’s a situation with his mother, involving a missing gun that is a key piece of evidence in an earlier case, that remains unresolved. And there’s the drinking. Alcohol “makes wax” of Matthews’ spine. A road trip might not help with the alcohol intake.

But Matthews has been studying the Brotherhood. If Matthews can find out whether the boy is alive or dead, and who is responsible, it could lead to an indictment that might bring the whole organization down. “The feds want this in front of a grand jury before the change of power in Washington,” says Matthews’ boss, lieutenant Fred Wilson. “Before a Trump Justice Department mistakes the Aryan Brotherhood for some sort of honor guard.”

So Matthews heads from Houston to the town of Jefferson and its peculiar culture. “Its town square looked like a shrunken-down French Quarter—colonial and Queen Anne buildings with second-story galleries bordered in intricate wrought iron—but without its sense of humor or even the tiniest hint of debauchery; the city square was like a courtesan who’d found Jesus.”

Then it’s on further to Hopetown, “tucked deep in the woods along Caddo Lake.”  The road to Hopetown “is so choked with vegetation—pines and pin oak shrubs, chickweed growing every which way—that anyone who didn’t know what was back here would give up and turn around within the first few yards.” The lake itself is “lined with ancient bald cypress trees draped in Spanish moss the color of an old man’s whiskers, the trees’ knobby roots standing up out of the water like a line of troops keeping outsiders away.” Seventy-two hours after Levi went missing, locals aren’t letting anyone from law enforcement inside any house without a warrant.

If black Texas Ranger Darren Matthews is meant to end up in a spot where he feels like a stranger in his own state, that’s Hopetown. Matthews is keenly aware of the limits of his badge and the added issues his skin color brings to each encounter. He needs to find his bearings.

While the missing boy’s mother and sister are panicked, the mother’s shady boyfriend Gil points the finger at Leroy Page, a quiet older African American with family ties to a group of Hasinai Caddo Indians. The interactions with Leroy Page and others in the small, overlooked community give Matthews a chance to recalibrate his own notions about feeling disenfranchised.

Matthews, in fact, is assaulted at every turn. A cruel mother. An inscrutable wife. Firm footing is hard to find. A middle-of-the-night encounter in the quirky Cardinal Hotel is dreamlike and confusing.

Ranger Darren Matthews is smart. He’s self-aware. And he’s sharp enough to know how the power of his badge can be used—and has been used—for corrupt purposes. Matthews watches the fabric of the country rip, and he watches his own behavior fail. He ponders how easy it might be to lie. He gets seriously drunk when it’s time to put the puzzle pieces together. But he presses forward, sorting through land deals and governmental collusion.

If you’re diving into a community you don’t know, Matthews thinks as he floats on the water of Caddo Lake, it never hurts to pay respect, to understand the history “before any of them on that boat had been born, before America was even an idea, before Mexico and Spain had a piece of it, before the French tried it too, before Texas was more than word of kindness on a Caddo’s lips. Tayshas.”