Heathcliff Redux: A Novella and Stories 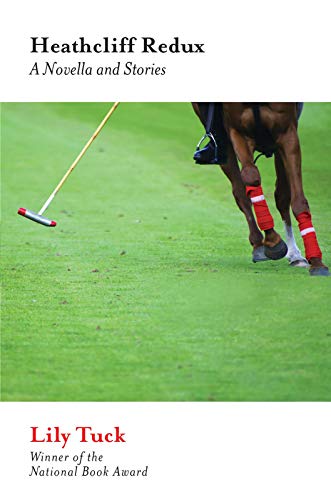 “All of the pieces in Heathcliff Redux possess moments of brilliance and reflect Lily Tuck’s tremendous craftmanship.”

Lily Tuck’s Heathcliff Redux is an engaging and clever homage to or contemporary riff on Emily Bronte’s Wuthering Heights. The novella, and title of the collection of short works, Heathcliff Redux is the most effective and well-written piece in in the volume, while the other four much shorter stories don’t really cohere and read more like sketches than well-formulated tales.

Narrated in the first-person, Heathcliff Redux is constructed as a series of short vignettes that comprise the tale of a married woman living in 1960s Virginia on a large horse ranch, who has an affair with the swarthy, bad boy Cliff. Contrary to her own instincts and although the narrator is warned by a friend that Cliff is “reckless and he’s an operator, he’s cheating on his wife and I wouldn’t trust him as far as I could throw him, he’d probably rob his own grandmother if he could, he’s nothing but trouble, mark my words. . . ,” she falls madly in love with him. Needless to say, her marriage and the affair don’t end particularly well.

While the narrative is mostly linear, Lily Tuck intersperses excerpts from Wuthering Heights and commentaries on Emily Bronte, recipes, and asides that relate to and parallel the narrator’s relationship with Cliff. For instance,  a section in which the narrator recounts her dream, is followed and mirrored by a “chapter” or quotation from Wuthering Heights: ”’I’ve dreamt in my life dreams that have stayed with me ever after, and changed my ideas; they’ve gone through and through me, like wine through water, and altered the colour of my mind,’ Catherine Earnshaw tells Nelly.’”

Heathcliff Redux is deliberately and well crafted. The narrative is conversational in tone and while mostly linear, wanders off into a sort of stream of consciousness. The narrator’s musings and asides work because they contribute to rounding out her character; they show her as a well-read, observant, more multifaceted character than either her husband Charlie or her lover Cliff.

The four short stories in the collection share some of the stylistic devices as the novella but are not as well designed or developed. “Labyrinth Two,” a homage to a story by Roberto Bolano, who was inspired by a photograph of people sitting around a table at a café, is also reminiscent of many a Raymond Carver and Ernest Hemingway story or even a piece from a society magazine. The other three very short stories, “The Dead Swan,” “Carl Schurz Park,” and “A Natural State” were all haunting and interesting but seemed more like drafts or studies for potentially great stories.

All of the pieces in Heathcliff Redux possess moments of brilliance and reflect Lily Tuck’s tremendous craftmanship. However, the four short stories don’t add much to the book and don’t really fit. The novella Heathcliff Redux is able to stand proudly on its own.