Heat and Light: A Novel 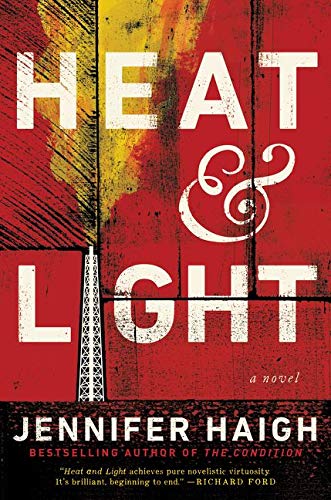 There have been novels about oil (Giant by Edna Ferber), coal strip-mining (Jonathan Franzen’s Freedom), and traditional coal mining (Baker Towers by Jennifer Haigh). Now Haigh, the bestselling and award-winning author of four other volumes of fiction, has taken on the controversial gas-drilling technique called hydraulic fracturing, or fracking, in her newest novel, Heat and Light, set in the same economically forlorn Pennsylvania mining town as Baker Towers.

But this book isn’t only about fracking. In nearly 450 pages, Haigh sweeps in 33 years and more than a dozen major characters, plus the 1979 Three Mile Island nuclear meltdown, the controversial leader of est Werner Erhard, Munchausen syndrome by proxy, organic farming, heroine addiction, crystal-meth addiction, and a touch of strip mining.

It’s a tribute to Haigh’s narrative talent that the plot never flags. And her sprawling cast is, for the most part, flesh-and-blood people with some degree of complexity and backstories.

The author’s research is also impressive. She knows what it’s like when forests are torn down and “mechanized claws grab the cut timber. They toss it aside like Mothra having a tantrum,” followed by earthmovers and “the low whine of the augur, its throaty mechanical pleasure” as it digs the gas well. She’s equally familiar with the unappetizing breakfast buffet at any Days Inn.

However, there is just too much: too many characters, too many subplots, too many causes of moral outrage, and not enough time, even in all those pages, to follow any thread in great detail.

Among the property owners who sign are Rich Devlin, a prison guard who desperately needs the cash to fulfill his dream of turning his family’s land into a dairy farm, and his hypochondriac wife, Shelby. Their lesbian neighbors, nurse Rena Koval and farmer Susan “Mack” Mackey, hold out.

Rena finds herself attracted to Lorne Trexler, an anti-fracking activist and professor at a nearby college, who is investigating the strange illness of the Devlins’ young daughter and who years ago was the lover of geologist Amy Rubin, now a consultant to Dark Elephant.

Meanwhile, Rich’s long-lost brother, Darren, a recovering drug addict, suddenly arrives in town, tempted to rekindle a romance with his high school flame, Gia Bernardi—if she can fit him in among the rig drillers she is, um, “dating.” An affair is also brewing between one of the married drillers and the widowed pastor, Jessie Peacock, whose late husband Wesley died of cancer probably related to the Three Mile Island meltdown.

Those are merely the main plot lines. Multiple histories and character relationships are constantly interwoven, often in subtle ways. For instance, a colleague of Rena’s who is mysteriously sickened after treating a fracking accident victim is the same person whose birth control pills are secretly slipped to a transgender inmate in the prison where Rich Devlin works . . . oh, never mind.

Amazingly, this sprawling canvas almost comes together. The characters are drawn well enough that the reader can follow most of them back and forth in time. Even the head of the evil fracking company gets two-and-a-half dimensions.

But Haigh relies on black and white paint too much to distinguish the numerous players. The Dark Elephant lawyer is named Piggy Bunch, while the PR guy used to work for Big Tobacco and the National Rifle Association. (What, not ExxonMobil?)

And too often, Haigh slips into moralizing or overly dramatic language. In describing how Wesley Peacock and his relatives died after Three Mile Island, she writes:

In Pennsylvania, four dead Peacocks.
The spring after Chernobyl the starlings never came.
Like all legit catastrophes, Three Mile Island has been explained by academics. The Theory of Normal Accidents: an unanticipated interaction of multiple failures in a complex system. The disaster was unexpected, incomprehensible, uncontrollable, and unavoidable, according to people who know.

Heat and Light is certainly a good read. But if Haigh had limited her ambitions and focused her—ahem—energy more tightly, she might well have emerged with a shorter yet richer book.