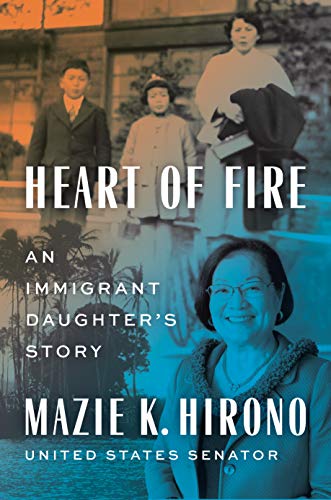 Hawaii Senator Mazie Hirono has been fighting for the human rights and justice since her student days as an activist at the University of Hawaii in the ’70s. Sen. Hirono has led the fight for the rights of immigrants, indigenous populations, refugees, and other oppressed people as a state representative, attorney general of Hawaii ,and since 2013 in the US Senate. Currently Hirono and Grace Meng (D-NY) are co-sponsors of the Covid-19 Hate Crimes Act that passed through both chambers of Congress, to address the violence and hate speech targeting Asian Americans that has spiked over the past year.

Her memoir Heart of Fire tells the powerful story of an immigrant family and how they held together through poverty; xenophobia; and abuse as they pursued American ideals of equality, justice, and freedom. It is one of the most inspiring and authentic political memoirs among a sea of self-aggrandizing political titles of recent years.

Hirono also bring journalistic objectivity about the obstacles she overcame regarding the misogyny and condescending culture in the male dominated halls of Congress. Senator Hirono’s portrait of her mother, grandmother, and her brothers, is the heart of the book. Mazie observes that her mother could be stoic to others, but always possessed the “heart of fire” to achieve her goals for her family and for what is just in the world.

Her young brother Wayne had a difficult time being separated for from his mother and siblings, even though he was being taken care of by his grandparents in Japan until he was old enough to go to school.   The separation had a profound impact on him the rest of his life. He was a shy, unsure of his place in the world, only finding any happiness in the confines of his family. He was killed at sea one day when he was fishing on a rocky beach cliff and a wave swept him out into the water.

A large portion of the book chronicles her mother’s courageous journey from being trapped in an abusive marriage in Japan with seven-year-old Mazie and her brother Roy to Hawaii. Hawaii was not yet the 50th state, but it was controlled by US corporations that exploited Asian immigrants, guaranteeing them jobs, but paying them pennies for hard labor or factory jobs.

Laura worked tirelessly in two jobs so she could stabilize her home and eventually bring her parents and mother son Roy to Hawaii. Throughout her young life Sen. Hirono was aware of the many layers of struggles for Asian woman emigrating to Western cultures. Laura was born in Hawaii, her mother of one of the “picture brides” in an arranged marriage to a man she never met in that ended up not being what she had been promised. She ended up being wed to the man in a group ceremony on the dock and working beside him from dawn to dust in the sugar fields. Sen. Hirono made the best of it by saving enough money to start a business.

Mazie emulated her mother and grandmother’s independence and quiet resolve not to be defined by the tradition roles assigned to Japanese women and not acquiescing to the destructive stereotypical expectations of Asian women as sexual playthings and silent servants proscribed by the west.

Hirono also cites Betty Freidan’s seminal manifesto The Feminine Mystique for breaking through the boundaries of misogyny, and the entrenched sexism that persisted in the halls of Congress. In Hawaii she fought stoically to achieve her goals to improve education, job rights, and civil rights for Native Hawaiians and for Asian immigrants. The humanitarian concerns for refugees have been a lifelong cause.

From preserving Indigenous Hawaiian languages, to a slate of educational initiatives for underserved or ignored communities to fighting sexism, racism, and anti-GLBTQ discrimination, Hirono didn’t slow down even when, in 2017 she was still recovering from cancer surgery but was on the Senate floor to give a moving speech to stop the Republicans from repealing Obamacare.

Her progressive reforms have improved the lives of millions of Americans. Hirono is very candid about the serious relationships in her life and about her personal faults that contributed to breakups.

Hirono’s meticulous strategies were effective, but she was not a high-profile media politician. This changed during the Trump administration; she came out fighting and instead of euphemistic language on the floor of the Senate she would directly call out or confront Republicans or operatives in the Trump administration. Speaking out against the horrific policies of child separation of refugees at the border. Hirono knew firsthand how much a child can be traumatized by being separated from their parents at an early age. The issue was close to her heart after she witnessed the harmful effects on her younger brother Wayne.

Hirono took on other bullies in power, too. In 2020, she confronted AG Bill Barr on the Senate floor hearing with a litany of his abuses of power to legally shield Trump and a list of questionable actions against people Trump did not like. The smug AG literally could not respond there was so much truth in Hirono’s condemnation of his actions. it took Lindsay Graham, the committee’s chairman, to begin shrieking at Hirono, accusing her of “slandering” Barr from “top to bottom.”

An unfazed Hirono did not back down. Her personal life and her life as a public servant, are an ongoing profile in courage. The Senator’s memoir is a beacon of hope that integrity and truth is in the capital in this cynical and perilous time.