Healthier Southern Cooking: 60 Home-Style Recipes with Better Ingredients and All the Flavor 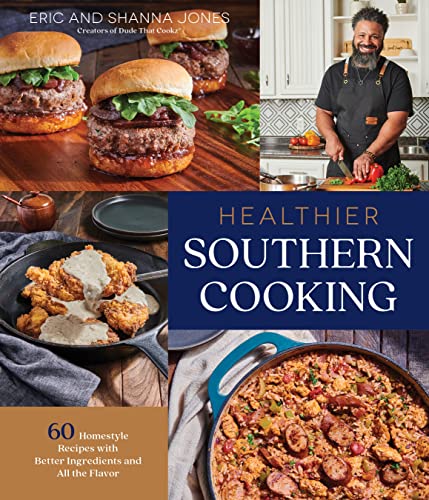 Can true Southern cuisine—think fried chicken, mashed potatoes and gravy, macaroni and cheese, and fried okra—be transformed into healthier fare without losing the flavors and tastes that make this type of cookery so satisfying?

While most of us would say no way, Eric and Shanna Jones, authors of Healthier Southern Cooking: 60 Homestyle Recipes with Better Ingredients and All the Flavor, are out to show that healthy doesn’t mean boring. Their Southern credentials are impeccable. A husband and wife team, Eric is a native of Louisiana and Shanna hails from Houston, Texas, where she was born and raised. Together, they’re the founders of Dude That Cookz, a creative cooking blog with lots of great recipes and photos. Eric is the cook and Shanna a photographer who manages the brand, a role that also includes maintaining their blog and social media content and whatever else needs to be done so that Eric can focus on cooking. But Shanna also contributes to the kitchen as an avid baker. Married for more than a decade, the couple has two children.

And a love of cooking.

Eric, who describes himself as a country boy and country cook, learned his way around a kitchen early on from his grandparents. His grandmother made—and he learned—the type of Louisiana Southern cuisine that tastes oh so good but definitely doesn’t meet the criteria for low in calories or heart healthy. But his own need for what he terms as “dietary adjustments” as well as his parents’ early demise from health issues made him rethink the food he loved to cook and eat. The conundrum was how to make rich and soul-satisfying Southern food that’s healthy without losing the flavor.

Well, it turns out that you can, often by substituting ingredients without losing the full mouth feel that fats provide. Cooking clean is the key. Clean is the term Eric and Shanna give to their recipes that have less salt, less fat, less sugar, and a lot fewer calories.

Creamed corn, a staple of the Jones’ kitchen, is reimagined by substituting evaporated milk for heavy cream and using coconut milk and Parmesan cheese. Peach cobbler, that classic Southern dessert, eschews the usual thick sugary syrup, reducing the amount of sugar and instead adding maple syrup as an ingredient.

Southern potato salad calls for lots of mayo and, of course, potatoes themselves are starches that convert to sugar in our system. The solution? Less mayonnaise, the use of red potatoes since they have less carbs and calories than russet potatoes, and adding hard boiled eggs—all of which, says Jones, make a dish that is full of flavor and texture.

But what about that Southern staple: fried chicken with gravy? The answer again is coconut milk, this time replacing buttermilk. Then instead of deep frying, it’s pan-fried in a minimum amount of sunflower oil. As for the gravy, 2% works just as well as cream or whole milk.

In the cookbook, the first by the couple but undoubtedly not the last, each recipe has a write-up by Jones as to how he’s reducing the caloric footprint of the dish as well as lowering the level of salt but maintaining the flavor profile with the addition of other herbs and spices.

Of course, Jones admits, sometimes you just need a double-stacked burger. But the beauty of all this, by eating clean, once in a while you can eat dirty without a lot of guilt.