Health Professionals and Trust: The Cure for Health Care Law and Policy 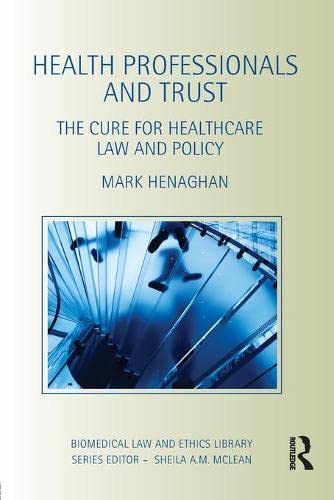 “Mr. Henaghan does shine light on the confusion regarding the multitude of patient safety organizations and makes health care system simplification sound attractive. He also underscores this red herring by stating that the administration of all of the layers of bureaucracy consumes dollars that could be spent on preventive care—though, at least in the U.S. the dearth of investment in preventive care funding has left the public to fend for itself in this area.”

If you are going to read one book on health care policy in the next year, this is it. Though the lithe document is only 132 pages excluding the bibliography, Mr. Henaghan packs so much into the sparseness of his words. Don’t be deterred by the Law and Policy subtitle, for as Health Professionals and Trust is not an intimidating book.

Mark Henaghan illustrates some of the problems created by ill-advised regulations, especially regarding tort reform and patient safety. Mr. Henaghan proves that you don’t have to dumb it down to a 9th grade educational level to create a readable book on resourcing health care. Thank you, thank you, thank you from the literate crowd who are tired of seeing cartoons that pass for books these days, lots of caricatures and no real characters.

The basis of Mr. Henaghan’s book is that the trust between clinician and patient is paramount to the success of any health care initiative, and the path to nurturing trust is not a commanding interstate, rather it is a winding path through the countryside.

In the first chapter he cites numerous examples of clinical studies that were conducted without full patient consent, many of which were done by U.S. researchers with National Institute of Health support.

The most famous of these odious studies involved the Tuskegee men in Alabama whom were all black men and were diagnosed with syphilis but were never told they had contracted it, thus causing permanent biological damage—entirely preventable permanent damage.

Lest Mr. Henaghan seem prejudiced against the United States he also cites examples of such medical study abuse in New Zealand and the United Kingdom. If you are looking for some crime statistics, the latter is a real page turner, including the story of an English doctor who killed over 200 of his patients by injecting them with a lethal dose of opiate.

It is easy to see why indigenous populations and those of racial minorities have been cautious of embracing “western medicine,” despite medical evidence and the much ballyhooed best practices.

David Rogers of Cornell University is quoted saying, “Nothing has done more damage to the trust part of medicine than the belief that the use of marketplace ethics and competition would improve medicine and make it less expensive.” Hurrah! At last someone gets it. Competition in health care does not necessarily make it less expensive or safer for the patient.

Michael Power, author of The Audit Explosion, believes that many people adapt their behavior to reflect their lack of trust, and this is revealed when subjected to external auditing. Perhaps an incentive for organizations would be the ability to skip the next audit if they score above a certain level of truth worthiness and transparency.

Mr. Henaghan also analyzes the importance of trust in obtaining patient consent and believes that any structure which makes it difficult to know when to trust the professional puts the patient at risk. He suggests that neither external nor internal regulation is a failsafe when self interest promulgates unethical behavior. In other words, auditing does not create trust; it merely attempts to measure it.

One of the services Mr. Henaghan provides for the reader is illustrating how codifying patient’s rights can get in the way of safety outcomes. He provides provocative contentions for us to ponder as the United States moves forward with systemic health care changes. In short, trust cannot be demanded, but is earned by the clinician’s confidence in the health care facility and system of reinforcements along with the patient’s. Trust is a walk we must do together and all of the” lawyering up” that is so prevalent in this country is not helpful.

I don’t know that I agree with all of his conclusions, because as a former hospital consultant, I found that the addition of hospitalists to patient care was to increase continuity of care rather than decrease it. And all patterns of change in clinical care are devised by a multidisciplinary team of clinicians, so the “doctor–is-in-the-house.”

But Mr. Henaghan does shine light on the confusion regarding the multitude of patient safety organizations and makes health care system simplification sound attractive. He also underscores this red herring by stating that the administration of all of the layers of bureaucracy consumes dollars that could be spent on preventive care—though, at least in the U.S. the dearth of investment in preventive care funding has left the public to fend for itself in this area.

It is always great to view health care outside the United States’ continuum, and Health Professionals and Trust is a contemporary review of phenomena that are driving health care changes today. Mr. Henaghan poses the question of death by a million paper cuts for our clinicians, which is certainly worth reflection.