Health Justice Now: Single Payer and What Comes Next 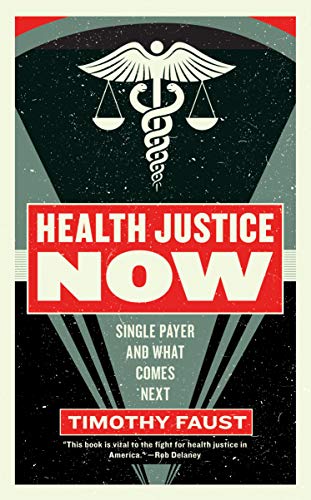 “We need a change in our healthcare system now. Faust provides insight into why the system is broken and what can be done to create a physically and mentally healthier America.”

The simple truth about healthcare in the USA is that if you get seriously ill  or injured, and you are not wealthy or covered by a top-notch insurance program, you either will not get the medical care you need or you could be bankrupted to get well.

The tragedy in this is that, “We have the resources to take care of everyone, and yet we refuse to do so.” That is the underlying premise of Timothy Faust’s Health Justice Now: Single Payer and What Comes Next. This book is a primer on how to restructure the American healthcare system to create a system that is affordable, accessible, and high-quality. In short, it is a book about healthcare justice.

Faust sets the stage for his pitch for a single payer system by first describing how the current system came to be. It is a squalid and heart-wrenching tale of placing profit before people. In Faust’s view, ours is a system based on racism, prejudice, and the principle that some people deserve quality healthcare while others deserve none at all. He makes a strong case.

The American healthcare system commodifies healthcare as something to be purchased like shoes or kitchen appliances. Yet as Faust notes, we don’t have a commodity relationship with our health. Health is not something we own like a handbag or a car. Health, or lack of it, is part of who we are. This makes access to appropriate healthcare an issue of social justice.

According to Faust, all of us who are well are in a state of “temporary able-bodiedness.” One misstep walking down the street, a lack of judgement by someone driving a car, a hereditary anomaly, being in the wrong place at the wrong time—any of these problems can immediately cause us to go from a state of well to ill or injured, often in a moment.

Though the human condition is universal in America—any of us can become ill or injured—access to quality healthcare is not. Faust uses this fact to argue for a single payer system.

There are some important realities Faust illuminates in this book:

How can we possibly afford this panacea of access to quality healthcare? Faust addresses that question with voracity. Americans already pay more for less care than any other wealthy nation. The money is already being spent. The issue is should it be spent on actual healthcare or as profit to insurance companies?

Health Justice Now is a well-thought-out case for a single payer medical system that would benefit all Americans and make real strides toward improving our ability to do many things, from shepherding our families to participating in the economy.

If there is a criticism of Faust’s work, it is that he can be terribly vulgar. His sarcasm and insults lobbed at insurance executives and politicians could very well keep his message, which is important and well-laid-out, from hitting home with some of the people who have the power to act to change the system. The book at times falls into the mudslinging that thwarts necessary political action.

Health Justice Now: Single Payer and What Comes Next is a book that should be gifted to every state and national legislator in the US and its territories. Its careful attention to explaining the current American healthcare system and forward thinking plan is exceptional.

We need a change in our healthcare system now. Faust provides insight into why the system is broken and what can be done to create a physically and mentally healthier America.