The Health Gap: The Challenge of an Unequal World 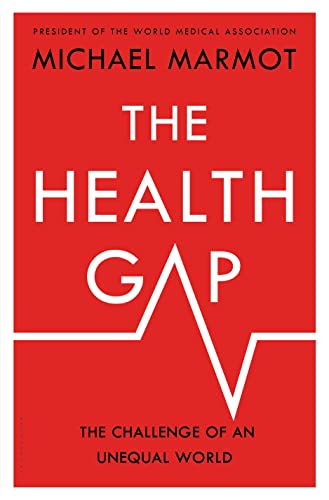 “To learn more about creative initiatives throughout the world that are improving conditions for human beings, buy this book, a bargain at any price.”

Health gaps are defined as shortcomings in resource allocation to support human wellbeing, which is a heck of a lot more than insurance reimbursement. Dr. Marmot weaves a masterful treatise on world financial and trade policy, availability of education to all people, and the robustness of infrastructure to support health status.

Essentially he has boiled three books down into one, which makes this literally a brief on the world’s ills and how our health is impacted. The book provides a crash course on major organizations guiding both financial and human service policies throughout the globe including the International Monetary Fund, the World Bank, the European Commission, the U.S. State Department, and various corporate interests.

Of note, the relentless tracking of the GNP or Gross National Product in the U.S. as it turns out, does not measure any of the things that make life worth living.  Former Attorney General Robert Kennedy revealed this premise in a speech at the University of Kansas way back in 1968. And thanks to hedge funds of the 21st century, the free fall of many countries has been front and center based on some of these banking and economic policies.

In the U.S., between 2010 and 2012, 95% of the wealth increase went to the top 1%. Marmot takes you on a journey illustrating how different nations addressed the global financial collapse of 2008–2012 and what those actions meant for the health of their citizenry, including Greece, Iceland, and Ireland. Though it may be no surprise to the millions of unemployed or the more fashionable term underemployed Americans, unemployment is actually bad for your health and this book is chock full of real evidence by this vaunted healthcare researcher.

If one reads the Wall Street Journal or the New York Times there are frequent economic references to national issues for health, unemployment, wage stagnation and the like for the U.S., but the data in The Health Gap, showing the U.S.’s attainment for many measures of middleclass health and wellbeing is staggering.

If you live in the United States, be warned the country is literally making us sick because of the grossly unfair allocation of resources to the wealthy, which as it turns out, does have adverse health consequences for the rest of us. Marmot even examines parenting and the social conditions which support or hinder family stability. Wage stagnation and the curtailment of employment-based social welfare benefits in the U.S. have placed increased pressures on families, to their detriment.

Most worrisome is the child poverty rate in the United States, which is second only to Romania after taxes and transfers! FYI-the child poverty rate in the U.S. is nearly 25%. Thanks to the Affordable Care Act at least more people are eligible for Medicaid or insurance subsidies, except of course for children who are born to parents who lack their green cards. The U.S. stands alone in punishing the innocent by denying them healthcare, education, and even basic legal status. Citing UNICEF, the U.S. ranks last for four key measures of child well-being; material, health, education, and risk/behaviors. The nation ranked last in this criteria a decade ago and it is still last in the wealthy nation criteria.

If you have had enough of the harmful effects of financial and social policies, Marmot cites healthcare outcomes, one of which includes the number of women dying in childbirth. The United States, which spends more on healthcare than any other nation by a mile, has a maternal  death rate of 1 in 1,800 women, as compared to Italy, which has 1 in 17,100. The U.S. ranks 62nd in the world for risk of maternal death, even though it is the richest country. Even now the nation denies healthcare to pregnant women who can’t show the appropriate paperwork.

Working conditions are examined in this landmark book, citing the British Whitehall study which found that workers with high demands, low environmental control, and an imbalance between efforts and rewards had an increased risk of heart disease and mental illness. Americans are defined by their work and if deemed unable to obtain high quality work in a decent environment, it is considered their fault. Marmot’s work shows this is not true, with more than one elucidation to the global race to the bottom in the name of competition. Many of the gross disparities, which are thought to be race-based in the U.S. are shown to be more closely linked to social mobility and poverty.

Marmot makes several clear points which are easily embraceable, investing in people does pay off economically, create healthier citizens and concentrating too much money at the top destabilizes the nation.

Contrary to the adage our mothers taught us, what doesn’t kill you can and does harm us. And really, shouldn’t we expect more from our country than merely surviving the grind? To learn more about creative initiatives throughout the world that are improving conditions for human beings, buy this book, a bargain at any price.