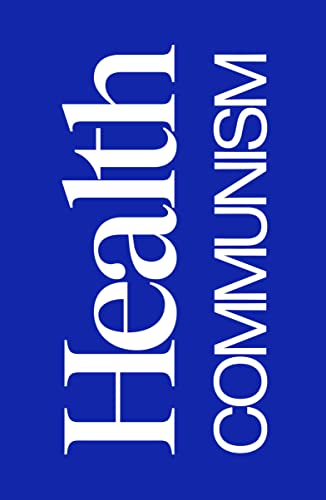 “Health Communism serves as a wake-up call for the dehumanization of healthcare delivery.”

Health Communism is a takedown of the global attack on socialized healthcare systems by capitalist interest groups. From the very first chapter the query of how health is defined is called into question. “Health has no fixed meaning, it is fluid.”

“From a liberatory standpoint, socialized medicine is principally understood as a more equitable distribution of medical care or healthcare, in which this distribution ceases to be a matter of whether an individual’s class, finances, race, ability, or gender preclude them from receiving care.” Yet the U.S. still foists the prospect of who deserves healthcare on individuals, as if some are more deserving than others.

Adler-Bolton and Vierkant take issues with the determination of need for distribution of health services and provision of care, as inseparable from the capitalization of healthcare. They argue that no socialist health system can exist in a capitalistic society without incursion from monetary interest groups.

In terms of the provision of health, social infrastructure, housing, clean air and water, public sanitation, and a survivable planet are all essential components, all impacted by capitalism’s profits over people ethos. Adler-Bolton and Vierkant coin the term surplus to define those classes of people who are deemed less valuable in a capitalistic society. “Once marked as surplus you are regarded as waste. The history of social welfare systems is marked by battles over what the surplus populations deserve.” They advocate a complete overhaul of the healthcare system, which has spawned industries that feed off the host body but don’t necessarily improve health of the population.

Health Communism devotes a good deal of copy to the German health system, which developed the first social health insurance system in the world, with the stated role as the maintenance of the health of its population. Social supports have come to be viewed as an undue burden on the public coffers that only modestly ameliorate the living and working conditions of the poor, not just in the U.S. but globally. Frederick Ludwig Hoffman’s statistical approach at the behemoth Prudential Insurance Company defined as race science or eugenics deployed in the beginning of the 20th century was used to deny coverage and discriminate against persons of color. Health insurance was promoted as encouraging loafing and absenteeism in the workplace.

Here, Health Communism brilliantly defines people as labor, either actively laboring or unable to labor. As if humanity has only these two states in which all are measured to assess its utility value and potential for any investment of resources. The American Medical Association, the insurance industry lobbies, and pharmaceutical companies were all against the creation of Medicare, for it represented a government encroachment on their regulation-free-zone.

There has been a long history of those with capital maligning those without, as the idle poor, vagrant class. This insult is not outdone by some of the Christian dogma, though certainly also true in Hindu, the circumstances endured by the unlucky were thought to be payment for sins in this life or a previous one. Thereby wiping the slate clean of the need to provide financial stipends to those unfortunate souls.

The tiered system of worker/surplus deservingness was informed by the Elizabethan Poor Relief Act in 1601. Anyone considered undeserving and thereby burdensome, which included poverty-stricken children and able-bodied dependents were put to work. No child labor laws back then so children as young as ten could be apprenticed or worse yet, sent to work in the mines.

Even the director of the Carnegie Institution’s Station for Experimental Evolution at Cold Spring Harbor, felt that money was ill spent in the reclamation of the disabled, the poor, and the idle. He promoted a eugenics movement for warehousing the incurably defective to prevent them from reproducing.

Health Communism illustrates how people are viewed as fuel from which to extract profits through the medicalization and financialization of health outputs. Paraphrasing Adler-Bolton and Vierkant, this has justified organized state abandonment and enforced poverty of the poor, and it has tied the fundamental idea of safety and survival of humanity to exploitation. It is an understatement to say the authors have gone where no one has before in this blistering critique of global health systems, all at the mercy of bankers, lobbyists, and industrial titans. It seems society has come full circle back to the robber baron days when the working class were subject to the whims of those with the purse strings. After all, Amazon and many other companies can now measure how much your toilet breaks impact productivity and dock you in your review.

Though not light reading, Health Communism does a good job of keeping the treatise brief at 240 pages, including substantial notes and index pages. Best to avoid the Cure chapter, which goes down the rabbit hole of a German mental health practice that eschewed accepted institutional treatments for patients and wound up being perceived as a threat to society. Health Communism serves as a wake-up call for the dehumanization of healthcare delivery. Perhaps that is the best place to start with fresh conversations on healthcare reforms.