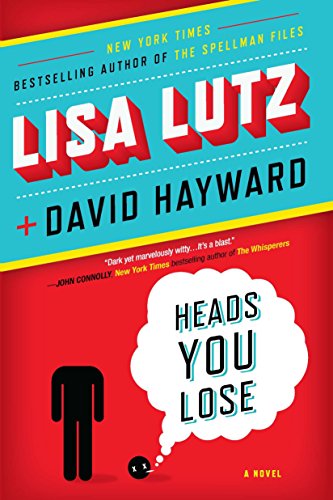 A headless corpse appears on Lacey’s lawn. And that is how what author Lisa Lutz calls her first “proper crime novel” begins. There are more bodies in this novel than in her popular, but mostly bloodless, Spellman series (four novels and growing). Nevertheless, Heads You Lose is certainly not typically “proper.” The book’s disjointed events create an unconventional plot, and it is only the talent of the authors, especially Ms. Lutz, that renders Heads You Lose such an irresistible read. Ms. Lutz’s dialog dances with a considered light hand, even when it’s insulting, but funny. This is to say that Ms. Lutz fully commands the story’s comic resonance, if not the action.

A major device in the book is the parallel of the protagonists—brother and sister, Paul and Lacey, respectable pot growers—to the authors, Mr. Hayward and Ms. Lutz, former sweethearts in real life. The characters bounce around in the plot, and the authors’ rocky relationships with both the book and each other are revealed through the exchange of letters at each chapter’s end. Most readers will have trouble deciding which part is funnier: the book or the letters.

The authors alternate chapters and every chapter ends with the to-and-from letters. The letters work on two levels: First, they show the reader how Heads You Lose is being written and produced through crazy turns, witty sarcasm, and power struggles between the two authors. The letters are akin to a ping-pong ball, flying crazily from paddle to table to the opposite paddle—often with force and always with skill.

Ms. Lutz is savvy enough to portray herself as wicked, if not a shrew, for a dominant effect in the exchange of letters. Thus, female readers will sympathize with henpecked co-author Mr. Hayward; for instance, Ms. Lutz killing Mr. Hayward’s favorite character is not a loving act. Yet in this remarkably insane book, fear not: Mr. Hayward will simply bring the dead scoundrel back to life.

Aside from the investigative siblings, significant characters include a stripper with a big brain, a missing doctor who is not a doctor, a real doctor, a former lover (maybe, but now headless), a crazed vet who retreats to a tree house when troubled or drunk, a somewhat inept Sheriff Ed, Deputy Doug, the town gossips, and its eccentric residents. If you put all these characters in a jar, shook it, and emptied it on a table, you would have a map of the novel’s general mayhem and nonsense.

Nevertheless, Heads You Lose is highly satisfying, and the comic theater that runs through it is in careful hands. Ms.Lutz uses the right mix of literary devices at her disposal: overstatement, understatement, irony (satire), timing, reversals, allusions, dialects, and dress.

The setting—the small, nothing-ever-happens town, Mercer—is of full citizens who do everything, invading everyone’s business and tangling up the plot; yet these relationships—of family, grudges, sex, drugs, status, crime, and love—indeed characterize towns like Mercer. Further, it’s those relationships that authors Lutz and Hayward concoct that make Heads You Lose vastly entertaining. Heads You Lose is a feel-good, let-laughter-reign crime novel. Readers won’t care if it is “proper” or not—they’ll be having too much fun.