Heads in Beds: A Reckless Memoir of Hotels, Hustles, and So-Called Hospitality 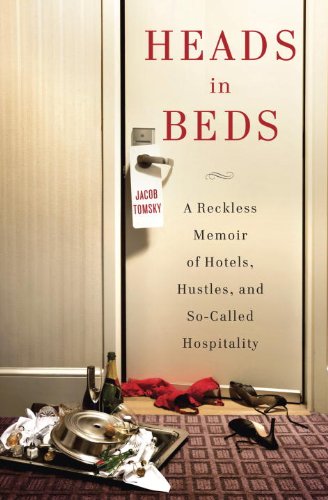 “. . . it’s about time for Jacob Tomsky to move on to bigger and better things. If this book is any indication, writing will be his next calling.”

As if I’m not already nervous enough to go out to eat, thanks to Kitchen Confidential and Waiter Rant, now all of my paranoid concerns regarding hotels have been validated—thanks to Jacob Tomsky.

In his literary debut, Mr. Tomsky rips back the curtain on the hospitality industry in which he worked for more than two decades. From a high-brow property in New Orleans to a soul-stealing gig in the heart of Manhattan, Mr. Tomsky worked his way up from valet to front desk, to housekeeping manager, and back to front desk after a long sabbatical in Paris—followed by an empty bank account and the cold, hard realization that escaping the hotel chain-gang wouldn’t be as easy as he’d hoped.

With incredibly witty, from-the-gut prose, Mr. Tomsky provides an inside scoop on the good, the bad, and the incredibly ugly happenings that go on behind closed hotel doors—as well as front desk antics that happen right before your untrained, naïve eyes.

Just when John Q. Public thought she understood the do's and don’ts of being a hotel guest—do tip the housekeeper, don’t touch the bedspread—a whole new horror has been revealed: Not only are those complimentary glasses next to the ice bucket not washed in the hotel dishwasher after each visitor, they’re rinsed under the hot tap and then shined with Pledge wood cleaner—or sometimes only the latter is performed.

But for all his revelation of hidden code words, covert tactics, and flat-out fuckery, Mr. Tomsky also arms would-be hotel guests with a basic arsenal of common sense, attitude adjustments, and financial tips that ensure their next hotel stay to be one of upgraded harmony and peace.

In addition to identity-protecting stories about spoiled celebrities, whack job run-ins, and co-worker camaraderie, Mr. Tomsky points out quite a few valid concepts and ideas that bathes hotel staffers in a whole new, humanizing light. He’s even nice enough to give a few charitable pointers on basic (victimless) gaming of the system—and makes it crystal clear that he’s onto all the underhanded tricks attempted by the rude and self-entitled guests.

Yet despite the extensive information provided, the number one lesson seems to be that while a $20 will get it done, a $50 will take you further, and a BRICK will launch you to beloved status.

With some added extras of pet peeves, helpful hints, and quick antidotes, Mr. Tomsky uses his on-the-job experience to deftly relay the slow burn of life in the service industry. Perfectly illustrating his journey, which began bright eyed and hopeful, motivating him to go above and beyond for each and every customer, while working for a company that really cared for and nurtured their people. To the harsh reality of working for a soul-sucking corporation, who’d rather fire solid experienced, 20-year veterans so they could pay minimum wage to inexperienced kids with zero work ethic and even less common sense.

Overall, Heads in Beds is a very fun, entertaining read. It is incredibly relatable, not only for a consumer, but also for anyone who has worked in a public-oriented service industry. Despite his brash language, or perhaps in spite of it, the author comes across as sincere and personable with the patience of a saint—or at least he’s really good at faking it.

Though it seems he was very good at this job, it’s about time for Jacob Tomsky to move on to bigger and better things. If this book is any indication, writing will be his next calling. The good news is, since his soul has already been sucked out, he basically has nothing to lose.