He Killed Them All: Robert Durst and My Quest for Justice 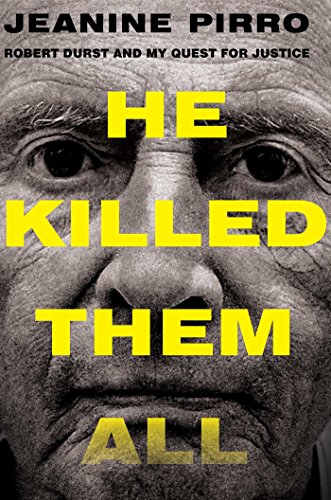 Jeanine Pirro revels in controversy, often provokes it, and then spins it to her advantage.

During her more than 40-year professional career as county judge, prosecutor, candidate for state Attorney General, and Fox News personality, she has attracted an army of admirers for standing up for crime victims and, as she puts it, “avenging the wrongs that one human inflicts upon another.” She also has endured incessant criticism for unethical, disingenuous, and self-aggrandizing  conduct.

A few examples: as Westchester District Attorney, she ignored the pleas of a man who had spent 15 years in prison for murder to do DNA testing to prove his innocence (he was ultimately exonerated after Pirro’s successor did the tests);  she falsely touted herself as founder of the Domestic Violence Unit in the D.A.’s office; one of her signature murder convictions was reversed because of “egregious” misconduct by her office; she leaked to the press during a tough re-election campaign a bogus allegation of corruption by two county attorneys—who supported her opponent—that destroyed their careers; during her campaign for state attorney general she played the outraged victim card, alleging a vendetta  by the U.S. Attorney’s office investigating charges that she illegally wiretapped her philandering husband’s yacht.

But Pirro has weathered unscathed these and many other indiscretions; indeed, she has become a fixture on Fox News where she hosts her weekly “Justice With Judge Jeanine,” where guests refer to her as “Judge.” Her book, He Killed Them All: Robert Durst and My Quest for Justice, features all the qualities that make Pirro both acclaimed and loathed. Her book focuses on her crusade to nail Robert Durst,  the husband of Kathleen Durst and  a young medical student who mysteriously disappeared in 1982 from their South Salem home in Northern Westchester. Durst, heir to the New York real estate empire, is suspected of having killed her and disposed of her body.

In her book, Pirro claims to be the “true hero” in the re-investigation of Kathie’s disappearance. Pirro describes how the original investigation was badly mishandled by police and sabotaged by venal members of Durst’s family. But she decided to restart the investigation, she declares, because, as a fighter for justice for abused spouses, “I was going to give Kathleen Durst the investigation she deserved.”

Pirro, not surprisingly, presents herself as perfectly suited for the task. As chief of law enforcement in Westchester,  she says “I led the charge every day on the battlefield. We were the cavalry with the white hats, the angels at our sides.” The cold case of Kathie Durst was the quintessential case for Pirro to resurrect because “I loved bringing justice to victims,” and “I had that gut feeling that the case needed a second look.” Pirro does get a bit melodramatic. She felt a “connection” to Kathie, a young and pretty medical student who “reminded me of my own swinging style back in law school.”

Pirro’s description of her feverish, Ahab-like quest to capture and annihilate Durst is tendentious, with a light, self-absorbed touch: “I want to dance in my Manolo Blahniks on his grave.” Her book adds nothing new to the narrative about Durst’s pathological life that has not already been exhaustively documented in the media; in a book, A Deadly Secret: The Strange Disappearance of Kathie Durst, by journalist Matt Birkbeck;  a feature film, All Good Things, directed by Andrew Jarecki;  and most recently the six-part HBO mini-series The Jinx: The Life and Deaths of Robert Durst, also by Jarecki.

Durst, as these sources show, is an extremely disturbed and dangerous person. In addition to being the prime suspect in Kathie Durst’s disappearance, he currently faces gun charges in a federal court in New Orleans, has been indicted in Los Angeles for the execution-style murder of his close acquaintance, Susan Berman, and was acquitted in 2005 in Galveston, Texas, for killing his neighbor, Morris Black, which Durst admitted, as well as chopping up his body and throwing the pieces into Galveston Bay, all except for the head.

Durst is also suspected of several other serial murders. The title of Pirro’s book is taken from the dramatic ending to the last HBO episode in which Durst, while using the bathroom but unaware that his microphone is still on, says cryptically, “What the hell did I do? Killed them all, of course.”

Pirro sees things in black and white. “I’m not one to get caught up in shades of gray,” she says. Crime is “a fight between good and evil.” Nor is she bashful about her motives: “What I’m about is settling scores.” To Pirro there are only villains and heroes. So not surprisingly, the most entertaining part of her book is the way she vilifies anyone she feels has stood in her way, upstaged her, criticized her, or ridiculed her.

She demonizes Joe Becerra, the state trooper who is credited by most observers with reopening and aggressively re-investigating Kathie Durst’s disappearance. In a particularly vulgar manner, Pirro refers to Becerra as “Hollywood Joe,” calls him a “media suck-up” and  an “asshole” who, Pirro claims, without any proof, leaked Pirro’s so-called investigation to the media, and although not explaining how,  thereby “betrayed law enforcement” and “put others at risk.” And lest the reader not fully appreciate Pirro’s dislike of Becerra, she recounts in soap-operatic prose how she claims he made a pass at her in a Galveston hotel. Nevertheless, although she says she never trusted him again, she continued to involve him closely in her “investigation.”

She also assails other enemies, such as Kevin Hynes, son of former Brooklyn District Attorney Charles Hynes, who Pirro hired, partly because of her friendship with his father, and partly because Kevin wrote a letter of support for Pirro’s husband, Al, who had just been convicted of tax fraud. Even though Kevin had virtually nothing to do with the Durst case, Pirro feels the need to disparage his character, possibly because “he and Joe Becerra were best pals,” and possibly because she speculates he may have talked to Jarecki, director of The Jinx. Pirro relates lots of gossip about Kevin Hynes: nobody in the office liked him, he cared a lot about about the “trappings” of his office, and he was arrested for a DWI.

Ellen Strauss, a lawyer and friend of Kathie’s, also comes in for Pirro’s abuse because she claimed Pirro was a shameless self-promoter who mangled the Durst investigation. “Complete hogwash,” Pirro declares. Pirro says that Strauss is a “little person” who did not know Kathie Durst at all, and is simply “a wannabe” who wants to be recognized as someone important. How does Pirro know this?  Apparently from another wannabe, a woman named Gilberte Najamy, also a friend of Kathie’s, to whom Pirro dedicates her book as the person who “led the charge to find Kathie.” It’s a very strange relationship. Najamy, arrested six times for drug possession, a parolee who spent time in prison, asserted that Kathie’s last words to her were “If anything happens to me, Bobby did it.” According to Pirro, Najamy on her deathbed tells Pirro: “Ellen Strauss did not know Kathie.” Would somebody really say this on her deathbed?

Pirro also ridicules Susan Criss, the Texas judge who presided over the Durst murder trial and issued an order directing Pirro to stop making any more public statements prejudicial to Durst. Criss, according to Pirro, was incompetent, “out of her depth,” living in “lalaland,” and without any proof alleges that Criss was “trying to ingratiate herself to people with deep pockets [Durst’s lawyers] to secure her next election.” Pretty strong stuff, and also a violation of Pirro’s  professional ethics.

Pirro calls the Galveston jury that acquitted Durst a bunch of “idiots,” an “egg carton full of stupid,” again a violation of her professional ethics. She attacks Durst’s lawyer, Dick DeGuerin, for, most shockingly, defending his client aggressively with arguments that Pirro virtually invited him to make: he blasted Pirro as a politically ambitious prosecutor who was stalking Durst for publicity to the point where she drove Durst to kill his neighbor in self-defense. It’s a ridiculous argument, to be sure, but the Galveston jury bought it.

Yet here is an interesting question: Exactly why did Pirro feel the need to traipse around the country after Durst? Why did she feel she needed to sit in the Galveston courtroom where Durst was being arraigned? Or to Pennsylvania where Durst was arrested after fleeing Texas? Or to Los Angeles? Or to New Orleans? Didn’t she have deputies, or investigators, to do the probing, interviewing, fact-checking? Pirro on this point seems quite vulnerable to the charge of grandstanding.

One explanation for her travels, especially to Galveston in October 2001, is that at that time she was locked in a bitter re-election campaign with an opponent who wanted to debate her. What better way to avoid a debate, attract lots of favorable publicity, and maybe even secure a lavish campaign contribution from a wealthy Texas oil magnate (which she did) than to go to Galveston?

Despite her trip being unusual, even unprecedented for a state prosecutor, Pirro claims that she had to “eyeball Durst, to size him up, to see for myself what made this man tick.” She also felt she needed to “see the evidence for myself, to be there to offer insight and share information with law enforcement.” Her argument seems illogical, even nonsensical, but it’s Pirro’s spin on a tricky situation.

Whatever one makes of Pirro’s book, it’s the sideshow that has attracted most of the media’s attention. A civil complaint for breach of contract filed last October in New York Supreme Court by award-winning journalist Lisa DePaulo, claims that Pirro hired her last spring to co-write the book and then fired her because DePaulo would not write a book that falsified facts and events about the Durst story. DePaulo’s lawsuit claims that “Pirro repeatedly directed DePaulo to describe events and circumstances that never occurred and to aggrandize Pirro’s role in the story at the expense of the truth.” According to DePaulo, Pirro invited her to move into Pirro’s $5 million Rye mansion for eight weeks, to live in the “maid’s quarters,” and work together on the manuscript. Much to DePaulo’s chagrin, Pirro used DePaulo as unpaid household help, directing DePaulo to clean the house; deal with merchants, deliverymen, electricians, and gardeners;  prepare the house for a fancy wedding Pirro was hosting; and even clean up  after Pirro’s dogs.

Unbeknownst to DePaulo, Pirro’s book proposal contained inflammatory claims, not supported by any evidence, of a “massive coverup” by the Durst family, and bribes to the Galveston jury to acquit Durst. DePaulo refused to participate in Pirro’s fraudulent scheme and was fired. Pirro has responded that DePaulo as an ungrateful, pill-addicted alcoholic, but does not refute DePaulo’s factual allegations

Pirro’s response to DePaulo parallels Pirro’s approach in her book to persons who criticize her: ignore the facts, make yourself a victim,  and malign and ridicule  those who attack you. As DePaulo’s lawyer shot back, “It’s an unbridled egotist’s defense mechanism.”

Bennett L. Gershman is an original faculty member at Pace Law School in White Plains, NY, where he teaches courses in Criminal Procedure: Investigation, and Evidence as well as Constitutional Law He is the author of Prosecutorial Misconduct 2d ed. and Trial Error and Misconduct 2d ed.