The Haves and the Have-Nots: A Brief and Idiosyncratic History of Global Inequality 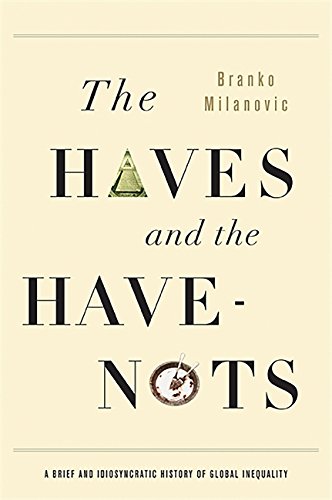 The novel Anna Karenina may have been analyzed from every literary and historical viewpoint imaginable, but has anyone calculated how much richer Anna would have been if she’d dumped her husband and married Count Vronsky? Whatever voters may think of President Obama, does anyone know how much money his Kenyan grandfather made, and how that compared with the average income of the country’s British colonial rulers?

Branko Milanovic, an economist at the World Bank, has delved into these and other historical and literary niches in his new book, The Haves and the Have-Nots. To put it another way, he has fun with economics:

• Who was the richest person who ever lived? (Not Bill Gates, by a long shot.)

• Can China survive as a single country? (If it doesn’t, that could well be because of the vast differences in income among its provinces. Look at what happened to the former Yugoslavia. If you think it was the collapse of Communism that destroyed Yugoslavia, think again.)

Behind the fun are some serious concerns about growing global income inequality. While he is somewhat cheered by the progress in India and China—to which he refers a bit too often—Milanovic warns that “the absolute gap in welfare between an average American and an average Chinese” has actually widened “significantly” since China’s capitalistic growth spurt. Even more discouraging, “the most important challenge in this century will be to have economic progress in Africa.” Still, he knows what sells books, so there’s very little attention to the serious stuff.

Also underlying the fun facts is a prodigious amount of research: everything from demographic patterns in 13th century Paris to interest rates in ancient Rome.

The book is essentially a Freakonomics with a more limited focus—all the literary, cultural, and historical “vignettes,” as the author calls them, pivot around the topic of inequality—plus less explanation of economics and more numbers. Still, the two books share the basic idea of making economics accessible. And, like its more famous predecessor, The Haves and the Have-Nots on the whole succeeds.

Occasionally, Milanovic’s day job intrudes. The academic “essay” that introduces the first section, presumably to provide a theoretical underpinning to the light parts, is as boring as an econ textbook but, luckily, almost totally unnecessary. A reader can follow the economic reasoning of why Elizabeth Bennett’s mother was desperate for her to marry Mr. Darcy in Pride and Prejudice without the academic explanation. (For most of the other sections, however, it would help to scan the description of the Gini coefficient for measuring inequality.)

Moreover, the author has an economist’s typical predilection for formulas and assumptions, with the corresponding inattention to reality. After going on for some pages about how the inequality in Asia and Latin America are “mirror images” of each other, he never gets to more important topics, like the reasons or sociopolitical implications. And he seems naive when he asserts that, because China has not tried to propound a model of its economic formula, “its ideological influence will remain limited.” How about its geopolitical and monetary muscle flexing?

But Milanovic recognizes that economics doesn’t explain everything. As he notes, if Anna Karenina had left her husband, “she would have lost the custody of her son.” There are still things that economists cannot put a value on.