Havana Real: One Woman Fights to Tell the Truth about Cuba Today 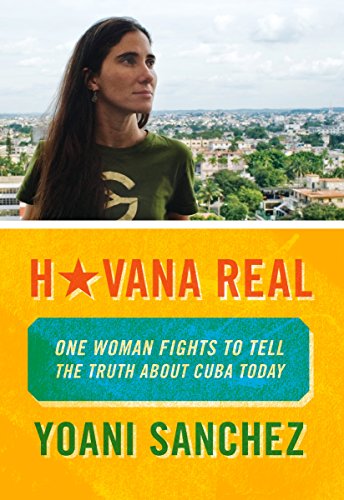 “Yoani Sanchez is a remarkable woman.”

Yoani Sanchez is a remarkable woman. Trained as a philologist in Havana but denied a career in academia because of her dissertation topic, “Dictatorships in Latin American Literature,” she has patched together a living since returning from self-imposed exile in Switzerland in 2004.

More importantly, she is a blogger with a huge following; Generation Y, as her site is called, gets over 14 million “hits” a month and has garnered awards for Sanchez that include the Ortega y Gasset Prize for Journalism in 2008, the Maria Moors Cabot prize for journalism from Columbia University in 2009, the World Press Freedom Hero award from the International Press Institute in 2010, and the International Women of Courage Award from the U.S. State Department in 2011.

Sadly, she has not been permitted to travel abroad to receive these awards, even though she has never called for revolution. She doesn’t even call for street protests or verbal attacks on politicians.

What she does is more powerful than that: She shares a simple diary about daily life in Cuba under the Castro regime. One day she might blog about food shortages, another entry may playfully point out how hard it is to get appliances fixed, and on a more serious note, she may be telling her followers what it is like to seek medical care. Her dispatches are poignant, honest, and in many instances, beautifully crafted. In her own quiet way, she is doing what most Cubans cannot: She is practicing freedom of speech.

This luxury often involves being crafty. In order to avoid trouble, Sanchez, who is married to independent journalist Reinaldo Escobar with whom she has a son, has pretended to be a German tourist and has played numerous cat-and-mouse games with authorities; nonetheless, she has been questioned by the police, her friends have been threatened, and she was even kidnapped and beaten, according to her publisher.

Yoani Sanchez has a “feisty dedication to the truth,” as TIME Magazine put it. Here are a few excerpts from her blog, posted clandestinely, no doubt, from an Internet café in Havana meant only for tourists:

“What these children are learning in school is the paralysis caused by the sense of being watched, the fear of provoking denunciation. For now, the whiff of being a delinquent can only result in scolding, or punishment, but the day will come when it can cost a job, the ability to travel, small privileges won, or even one’s freedom.” (2007)

“I try to imagine an incredible twenty-four hours in which I wouldn’t have to rely on the black market. What about a day without the milk brought by those who knock at my door? . . . I can’t conceive of a day without going to the black market to buy eggs, cooking oil, or tomato paste. Even to buy peanuts, I must cross the line into illegality.” (2008)

“Inspired by one of the many tourist advertisements, an idea has occurred to me to attract visitors to the Island. It is not a nature tour or an historic tour . . . ‘Come stay ’a lo cubano,’ like a Cuban’ could be the campaign’s slogan. That would be sure to lack interest for its target audience.” (2009)

“I feel a terror that almost doesn’t let me type. But . . . when one reaches a certain level of panic, higher doses don’t make a difference. I will not stop writing, or Twittering; I have no plans to close my blog, nor abandon the practice of thinking independently, and—above all—I will not stop believing that they are much more frightened that I am.” (2010)

Secretary of State Hillary Clinton has said of Yoani Sanchez, that she “has given voice to the concerns and aspirations of her fellow citizens . . . and so her words are being picked up and spread around because freedom knows no boundaries. She deserves our thanks for demonstrating that again and again.”