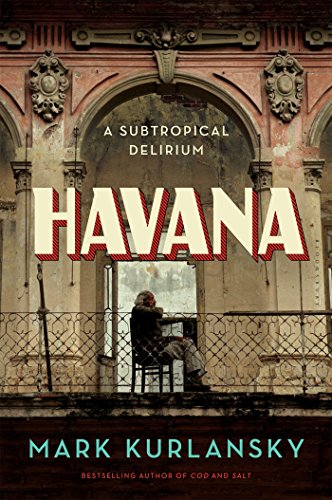 The somnambulant city of Havana, long in a slumber of decay, now seems poised for a new chapter as the world starts “discovering” a new, open, thawing Cuba. After five centuries, Havana’s tropical iridescence of heat, music, cuisine, architecture, and blended cultures lures us like a siren into its simulacrum of light and shadow.

We are in good hands to explore this diabolically alluring city with New York Times bestselling author Mark Kurlansky in Havana: A Subtropical Delirium.  His is an insider’s view of the ramshackle charm and special cadence of Havana, its tattered and elegant surprises and pulsating fun-loving life.

Kurlansky first visited Havana in 1981 as a journalist and fell madly in love with the city’s narrow cobblestone streets, its artists, writers and poets, its colors and fun, its elusive multiple layers, its neglected beauty.

In this book, he shows Havana through the eyes of Cuban writers as well as foreigners like Hemingway and Greene. He introduces us to Cuban baseball, brings Cuban music to life, and explores Cuba’s culinary legacy. Kurlansky’s own very accomplished pen and ink drawings illustrate the text. He even includes a half dozen favorite mouthwatering recipes. You will not find a better way to cook ajiaco, the quintessential Cuban dish, or a mojito cocktail in any other book.

Kurlansky sets the tone early: “If I were to make an old-fashioned film noir—with a cynical plot full of intrigue, violence, and sudden twists, filmed on dark and menacing streets in misty black and white—I would shoot it in Havana.”

Slowly, the portrait of this elusive city comes into focus. From the native Taino to Colombus’s landing, from Batista to Castro, from the Soviets to capitalism, it’s all here and elegantly told. To be sure, Havana’s history is sometimes messy. Built on a foundation of slavery, Havana had early struggles with pirates in the 16th century, constant revolutions against Spain, and original legacy as the original European tourist destination. The author does not shy away from Cuba’s perpetually tenuous relationship with the U.S.

But Kurlansky warns us not to be too judgmental: “There is a great deal of disagreement about Havana partly because in Havana disagreeing is a way of life. But most everyone agrees that it is like no other city on earth.” Batista, Coolidge, Errol Flynn, Allen Ginsberg, John Muir, JFK, Fidel, Raul, Che, Simon Bolivar, even Desi Arnaz and Yeonis Cespedes are all part of the complex fabric of the city.

Savor, for example, this delicious passage Kurlansky conjures up: “Sometime, as Americans in particular have occasionally observed, the sea off Havana can appear violet when it reflects the sky moments before daybreak. Ernest Hemingway, for whom “violet” would have been too flowery a word, described the Gulf Stream there as “nearly purple.” But Habaneros—that is, the people of Havana—tend to be less poetic about the sea, and the only one I ever found who thought the waters of Havana were violet was the mid-twentieth-century Habanero poet and novelist Jose Lezama Lima, who wrote:

“The violet seas longs for the birth of gods.
For to be born here is an unspeakable feast . . .”

There is a bounty of literature and poetry in this book, all inspired by Havana. Trollope, Lorca, Anais Nin, Langston Hughes—are all represented as are countless Cubans.

After reading Havana: A Subtropical Delirium, after exploring Havana’s crumbling cemetery, marveling at its colorful balconies, grappling with its black magic, its paranoias, its love of symbolism, the only conclusion one can come to is eloquently stated by Kurlansky himself: ”You really never know what you will find in Havana.”