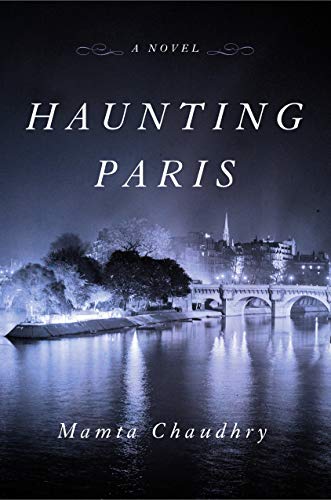 Julien Dalsace, a sensitive Jewish-French psychologist, has been dead for almost a year as Haunting Paris begins, in July 1989, but his ghost still roams the city’s ancient streets, yearning for glimpses of his longtime lover, the shy pianist Sylvie.

“I gaze at the willow weeping into the river, where reflections of the illuminated city shimmer in the dark like so many will-o’-the-wisps,” he thinks.

He is a romantic yet practical spirit, well aware of the process of ghostliness. “Our emotions remain too strongly tied to the body,” he muses. “Things are still ‘heartbreaking,’ ‘breathtaking,’ even when there is no heart, no breath.”

And he is not the only ghost haunting this poetic novel.

Sylvie misses Julien so deeply that she can barely sleep. Every day she walks her dog along the same routes she and Julien had always taken; she flirts with thoughts of suicide. The past “shadows each step she takes.”

Even while he was alive, Julien was haunted by his tragic family history during the Nazi occupation of France: His sister, Clara, was murdered at Auschwitz, and there is no trace of the fate of one of her twin daughters, Lilou. At the time of his death, Julien had been trying to track down yet another, probably meaningless, clue. Yet he’d told Sylvie nothing about Lilou and his quest.

Wisely, author Mamta Chaudhry grounds her romantic tale and evocative language with details that are sharply realistic, usually about everyday Parisian life. Will Taylor, a French-speaking literature professor from Florida who is renting Sylvie’s subdivided apartment for the summer, immediately recognizes that two women lingering by a shop window are “Americans just by their leisurely stride, so different from the neat, hurried steps of Parisians.”

With one of her occasional spurts of sly humor, Chaudhry adds that “he picks his way carefully through the next stretch of pavement, beloved of dogs.”

Best of all are the scenes when Julien seems to time travel, visiting a group of Parisian washerwomen in 1889, and witnessing the murder of King Henri IV in 1610.

The problem is that the plot hinges on an unbelievable premise. (No, not the ghost part.) The reader must believe that the devastated Sylvie, desperate for any concrete reminder of Julien, would wait until page 70 to tear open the sealed envelope that conveniently falls out of a secret compartment in his desk on page three.

Furthermore, once she finally tracks down the mysterious “M,” whose initial is on the envelope, Sylvie flees M’s apartment without asking the questions that are piling up, at least in the reader’s mind.

Luckily, the lure of the mystery and the seductive writing outweigh the annoyance of the author’s heavy manipulation.