The Hated Ones (VIA Folios) 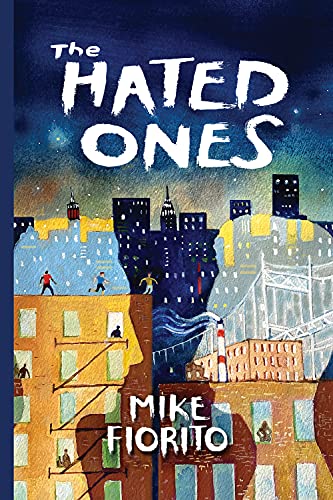 “There is hope and there is escape to be found on a road that can be violent and vicious. Proceed with caution when reading The Hated Ones. But proceed. By all means, proceed.”

The compelling, brutal poetry of the prose in this collection begins in the Foreword by Annie Rachele Lanzillotto (L is for Lion: An Italian Bronx Butch Freedom Memoir): “This book leaves you counting your blessings. Each and every one. Most poignantly the moments you were angelically snagged out of the abyss.” The Foreword functions as a warning to proceed at your own risk, for your heart may be wounded, albeit wonderfully, by the stories within, even as it assures readers that the rewards are entirely worth the potential hazard.

The Foreword is then followed by the author’s brief Preface, in which Fiorito outlines in spare, unsparing terms, the world he is about to share: “The Hated Ones uses the language of the street. The language is often filthy, violent and racist. . . . For all its darkness, The Hated Ones is a book about escape.”

Fiorito hits the scorched ground running in “Getting An A,” the first story in the collection. The first-person narrator, Vinny, who describes himself as having “only learned enough Sicilian from my grandparents to know the curse words,” is a student in junior high. He has a “very well-liked teacher” who is “even a good teacher.” The teacher makes Shakespeare “come to life” for his students. The teacher also takes Vinny into a bathroom on a regular basis and tells his student that if he puts his cock in his mouth, “You’ll get an A.” Despite feeling that “the universe had cut me open and a knife had been plunged inside me,” when it is time to graduate, Vinny cries as he says goodbye to the teacher. “I would miss him.”

More danger follows. In “Close to the Edge,” Vinny’s prized cassette radio, the one he and his family saved for months to buy and his dad warned him to not take outside or it would be stolen, is indeed almost seized by another kid in the projects who puts a gun to Vinny’s head. Vinny flees and somehow avoids being shot. After, while smoking pot with his friend, he is haunted by what would have happened if a bullet had found him: “I think of how my body would have looked, splayed out on the concrete, a puddle of thick red blood pouring out from my head, like gas gushing from a busted fuel tank.”

Yet even within this lingering terror, sounds shared with a friend bring transcendence: “We’re just kids, unable to explain that the music transports us to a safer place, a more beautiful place. A place less dangerous than the projects. Not as filthy.”

In The Hated Ones, Manhattan Island looms in the distance, the shining city of promise, while the boys surrounding Vinny threaten each other with battles to the near-death for territory and status. These young men are living next door to Garbage Park in Queens, where, long ago, “Black people were tortured and buried alive.” When Vinny’s brother escapes to go to school on the Upper West Side, he is a world away, where the “smell of the garbage couldn’t reach that far across the East River.”

Three short chapters into, as the title page within the book describes it, this “novel in short stories,” and the stakes are firmly established as life and death. This is the irresistibly absorbing and terrifying world Fiorito creates with his merciless words and his merciful words.

There is ugliness and cruelty here. Vinny and his friends plan to steal money from a homeless woman in their neighborhood, the “Cat Lady” of a chapter title. But when they leave the scene of the crime without having secured any cash from the helpless woman, they are “all a little relieved that we hadn’t killed her, even by accident.”

A moment of humanity? Yes, let’s call it that. And apropos of humanity, there is loyalty in these stories. A friend assures Vinny that if anyone “ever fucks with you, I’ll kill them.” A few months later, this same friend joins “a gang called the Hated Ones.” Membership requires that applicants “be resigned to [their] death,” possibly not a reliable winnowing technique in this milieu, where the Grim Reaper hardly seems like an occasional visitor.

Vinny makes prank calls and fields incoming obscene calls during his part-time job in the rectory of a church. He also steals his mother’s most precious piece of jewelry so he can sell it to buy himself a guitar. When his mother blames his hapless father, who has a gambling addiction, Vinny shows no remorse: “Only twelve years old and I’ve tricked them all. While I ran away with the golden egg, my father is nailed to the cross.”

Given the ethos of his surroundings, Vinny being a precocious misogynist can come as no surprise. As “the wise old fourteen year old [he] was,” Vinny breaks his girlfriend’s heart by dumping her because his friend told him he was too good for her. When Vinny discovers that his ex is now fooling around with that same friend, he decides she is “[n]othing but a slut.”

That Fiorito somehow creates sympathy for this character and inspires the reader to root for him is a feat of literary prestidigitation, one with so subtle a sleight of hand, it can be difficult to discern. Perhaps part of the author’s methods of enchantment become more visible when Fiorito brings his protagonist into adulthood. He sends Vinny to college and gives him an encounter with a Rothschild at his first job after graduating. And Fiorito gives Vinny a passion for music, from Led Zeppelin to Beethoven, rendering Vinny fluent in the universal language of a caring, yearning soul.

There is hope and there is escape to be found on a road that can be violent and vicious. Proceed with caution when reading The Hated Ones. But proceed. By all means, proceed.