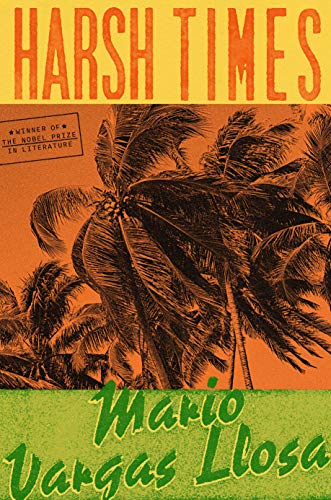 “Harsh Times by Mario Vargas Llosa recounts a disastrous event in the past, but it is also highly relevant in this era of disinformation, extremism, and violence.”

In 1954 Guatemala’s popularly elected government was overthrown. The victim: Jacobo Árbenz. The reason: Communism. At least that’s how history has inscribed the story in American newspapers, television, and radio, with both conservative and liberal defenders of the coup. Harsh Times, by Nobel laureate Mario Vargas Llosa, tells otherwise in an epic re-imagining of the coup and its decades-long aftermath. Vargas Llosa creates a multifaceted narrative with the primary focus the Central American nation of Guatemala. The novel posits the question: How can one create a banana republic?

The origin of Guatemala’s tragic history is traced back to an unlikely source. A meeting held by Edward L. Bernays and Sam Zemurray meeting with the board of United Fruit, the leading importer of bananas to the United States. Bernays and Zemurray will become the chief architects of an anticommunist public relations campaign. Part advertising drive, part ideological myth-making, the pair convince the board their plan is sound.

As Bernays explains: “The danger that Guatemala should turn communist and become a beachhead for a Soviet infiltration of Central America that would pose a threat to the Panama Canal is remote and for the moment, I would say, inexistent. . . . The danger isn’t real, but it is convenient for us that people believe it exists, above all in the United States. . . . And yet, contradictory as it may seem, [President Juan José] Arévalo’s boundless love for democracy represents a serious threat to democracy.” What sort of threats? Having the government institute land reform, have United Fruit pay taxes, and have workers receive a living wage and health insurance. Even today, when specific reform benefiting workers, farmers, and other vulnerable groups is put forward, the specter of communism is trotted out by the corporate oligarchy and their fellow travelers.

Vargas Llosa’s novel is both an international political thriller and an epidemiology of anticommunist hysteria. The narrative possesses broad-brush information, yet at the time presents the inner workings of individual characters. Despite the heated ideological conflicts, there aren’t any one-dimensional strawman characters. Everyone has motivations that seem organic, lived-in, and real.

Harsh Times has two beginnings. The first the aforementioned United Fruit board meeting, the second involves a young girl named Martita Borrero Parra, the daughter of a former Miss Guatemala and Dr. Borrero Lamas. As a baby she had “a disconcerting, frightening stare. Símula, the K’iche’ Maya Indian who would be her nursemaid, prophesied: ‘This child will have powers!’”

Martita’s life takes a fatal turn when she meets Dr. Efrén García Ardiles, a friend of her father’s who occasionally visited to play rocamber and discuss politics. Ardiles, a leftist of sorts, educates Martita on socialism, but also becomes enamored with the beautiful girl. An unplanned pregnancy follows, covered up by a secret marriage, and her father disinheriting her. Martita continues her misadventures throughout Central America and the Caribbean, eventually abandoning Ardiles and their child. She becomes the mistress of Árbenz’s successor, the authoritarian Carlos Castillo Armas. When Armas attains power, allegedly to the approval of the United States, he soon becomes a target himself. His government collapses in yet another coup and dictatorship. The cycle will continue for decades.

Beyond the political titans, Vargas Llosa traces the lives of ordinary soldiers, assassins, and bureaucrats. There’s “the Dominican,” an anticommunist crusader, assassin, whoremonger, and Rosicrucian. His peripatetic life mirrors that of Martita, traveling from Guatemala to Trujillo’s Dominican Republic and “Papa Doc” Duvalier’s Haiti. His bizarre admixture of sexual kinks and spiritual eccentricity add extra dimensions to this political thriller. The Dominican’s coarseness and savagery seem reminiscent of American counterparts found in the works of James Ellroy or Andrew Vachss.

Harsh Times explores the darkness and violence hidden beneath the surface of the history books. Coups, conspiracies, and assassinations destabilize the region long after Árbenz is removed from power. (A dark echo of Saddam Hussein’s removal and the Middle East collapsing in on itself, providing a ripe fruit to pluck by ISIS and other extremist groups. Was cheap oil really worth the oceans of blood spilled?)

The novel is less an anti-American diatribe (or CIA indictment) than a group portrait of a carefully engineered case of collective insanity. When seeing or listening to the latest outrage du jour, there are two things to keep in mind: Consider the source. And who benefits from stoking this outrage? Harsh Times by Mario Vargas Llosa recounts a disastrous event in the past, but it is also highly relevant in this era of disinformation, extremism, and violence.