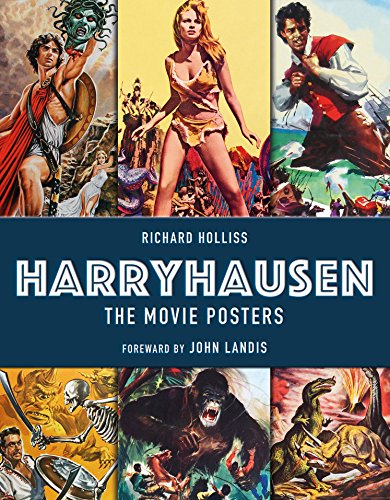 “Harryhausen: The Movie Posters is infotainment in the best sense of the word. Informative and entertaining in equal measure, it provides catnip for the nostalgic film fan as well as a perspective on a more periphery aspect of cinema history.”

Harryhausen: The Movie Posters, by Richard Holliss traces the career of Ray Harryhausen through the iconic movie posters that promoted the feature films. As film director John Landis states in the foreword, “Many of Ray’s creations are so unique that their image can instantly identify the film in which they appeared.” The giant gorilla Mighty Joe Young, the Kraken from Clash of the Titans, and the sword-wielding skeleton from The 7th Voyage of Sinbad. At the time of its release in 1958, a skeleton dueling with an on-screen actor was a revolutionary achievement.

Digital effects have long since replaced practical effects, due both to audience demand and budgetary constraints. But for several generations the epitome of Hollywood special effects magic had been the works of Ray Harryhausen. Harryhausen remains an influential artist and technician, someone who made the fantastic real. Movies wouldn’t have had Stan Winston, Kit West, or Rick Baker without Ray Harryhausen.

Fans can rest assured at the preservation and exhibition of these movie posters by the Ray & Diana Harryhausen Foundation. The primary reason vintage movie posters can become high-dollar items is because most are thrown out almost immediately. Once the movie finishes its initial theatrical run, there’s no reason to keep posters around. Along with their disposable nature, most movie posters were printed on cheap paper stock. Even for collectors and film fans, the medium can be vulnerable to deterioration. Movies are an expensive enterprise. No sense wasting addition funds printing posters on expensive museum-grade archival paper stock. Once Clash of the Titans is done, slap up the poster for next week’s feature.

The book dedicates a chapter to each of Harryhausen’s films. Each chapter begins with a production story of the film, peppered throughout with archival film stills and photographs of the stop-motion miniatures.

He traces Harryhausen’s career from his first work on Mighty Joe Young (Ernest B. Schoedsack, 1949) to Clash of the Titans (Desmond Davis, 1981). He details the inner works of the Hollywood machine, the hiring and firing of stars, producers, and directors. The challenges of practical special effects also receive an overview. On many early films Ray Harryhausen had assistance from his father. While Ray sculpted and filmed the scenes for the movies, his father actually built the metal armatures beneath the iconic figures.

Holliss also slips in humorous tidbits and funny asides about many of the films. It Came from Beneath the Sea (Robert Gordon, 1955) was shot in San Francisco, but the “City Fathers objected to any proposal that would show the magnificent Golden Gate Bridge being destroyed by a giant sea beast. So sections of the bridge had to be shot in secret in order for Ray to later combine them with a miniature version of the structure.”

The Beast From 20,000 Fathoms (Eugene Lourie, 1953), in which Ray worked on the technical effects, was “slapped with an X certificate” by the British Board of Film Censors “[i]n a (not so rare) moment of pure lunacy.” While shown on commercial television in the United States in the late 1950s, “British audiences had to wait until 1967 before it made an appearance on commercial television.” Another symptom of the nanny state or simply prudery?

Holliss lends an expert editorial eye and voice to the productions surrounding these posters. There are double-bills, one sheets, quads, and other promotional ephemera. It is a visual feast with several full-page spreads. One quad reveals a scintillating double feature: Raquel Welch in One Million Years B.C. followed by Ursula Andress in SHE.

There are also foreign posters, showing just what a global force Harryhausen’s special effects were. L’isola Misteriosa di Giulio Verne and Die Erste Fahrt zum Mond may not sound familiar, but the first is The 3 Worlds of Gulliver and the second First Men on the Moon. It is intriguing to see how other countries market these quintessential American films.

In the case of One Million Years B.C. most countries went with the iconic image of Raquel Welch in a fur bikini. Text and languages had different placement, but overall the imagery remained the same. The Polish poster is the odd one out. The poster for Million Lat Przed Naszą Erą shows a cartoonish dinosaur with a hairy caveman in its mouth. These oddball exceptions provide what could have been a repetitious exhibition of cinema history.

On a production level, Harryhausen: The Movie Posters reproduces these otherwise disposable promotional materials in brilliant colors and sharply rendered detailing. Owning a vintage Harryhausen movie poster may be an expensive enterprise, but the book offers a kind of imitation experience. The somewhat glossy finish on the paper give the reproduced images a nice weighty feel in the hand. The slightly oversized scale lends an added to realness when looking at the posters.

Harryhausen: The Movie Posters is infotainment in the best sense of the word. Informative and entertaining in equal measure, it provides catnip for the nostalgic film fan as well as a perspective on a more periphery aspect of cinema history. The filmmaking juggernaut involves numerous people, a well-oiled marketing machine, and tie-in material to spread the good word. The film poster can be a disposable commodity, a thing with a specific use and limited lifespan. Kudos to Richard Holliss and The Ray & Diana Harryhausen Foundation for their tireless effort to preserve these iconic images. Film is forever, but only if the dedicated and passionate choose to preserve them.