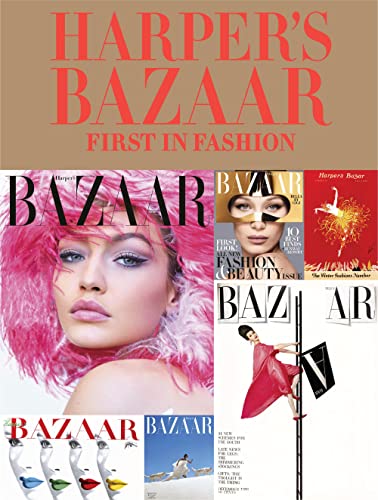 The most important aspect of Harper's Bazaar: First in Fashion is that it serves as a catalogue for a museum show that took place in Paris at the Musée des Arts Decoratifs. Keeping that in mind, this monograph is a very chronologically, factually, and most of all a historically told story about the evolution of Bazaar, as it was known in 1867 and how it metamorphosed into Harper’s Bazaar (1935) as we know it today.

“Why did fashion matter? It mattered then, as it does now, as it mattered in the mid nineteenth century, because, at its best, fashion has the capacity to inspire.”

So if you are looking for a book laden with glossy and staggering fashion images that span over 153 years then you will most certainly be disappointed. Do not be dismayed to think there are no images that boggle the fashionphile’s mind, but this reader felt that the curated images played second fiddle to the text, which is quite dry and rather textbookish as far as books of this genre go. Think of it this way, you’re at a museum wearing a headset, walking through an exhibit, and this is being recited to you as you follow the path and instructions.

What cannot be disputed here is that the players who inhabited this rarefied world were some of the most talented, brilliant, and innovative of the 20th and 21st centuries. Starting with Carmel Snow and ending with Glenda Bailey and including Vreeland, Avedon, and Brodovitch, to name a few, collectively and individually created a magazine that would become a force to be reckoned with when pitted against its sister publication, Vogue. In actuality it was Bazaar that was the launching pad for many of the aforementioned creatives that put Vogue on the map when it came to printed fashion bibles.

“According to Richard Avedon, Diana Vreeland—official fashion editor of Harper’s Bazaar from 1939 onward—reinvented a profession that had previously been the preserve of society ladies targeting an exclusive readership.”

To put it bluntly, Harper's Bazaar: First in Fashion is somewhat of a disappointment, but if the reader can wade through the text there is much to be learned and taken from the book. If you are expecting a coffee table pictorial history of the magazine then this is not the book you want. If you are a fashionphile who is focused on the history and development of fashion media as well as just fashion (clothes) then this is a book you want for your library.