Harold and Jack: The Remarkable Friendship of Prime Minister Macmillan and President Kennedy 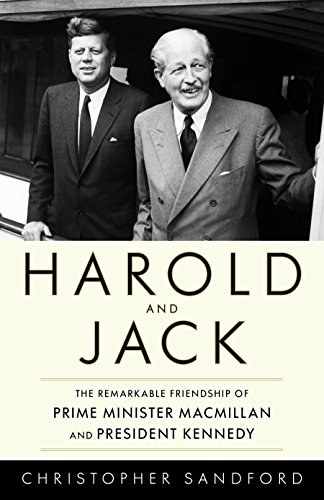 The Special Relationship between the United States and Great Britain was coined by Winston Churchill in 1946. Throughout the decades it has seen many ups and downs, its most recent iteration being between President George W. Bush and Prime Minister Tony Blair.

But the British public considering their Prime Minister as lap-dog to American political might is not a new phenomenon. Christopher Sandford details the political and personal relations in his new book, Harold and Jack: The Remarkable Friendship Between Prime Minister Macmillan and President Kennedy. Mr. Sandford charts their “brief shared time in office (just 33 months” and sees the book not as a biography, but as “a comparative study of the two men, in some ways the odd couple of the Atlantic alliance.”

When Kennedy and Macmillan shared office, the Cold War experienced its most fraught events, including “the Berlin Wall, the Bay of Pigs, nuclear proliferation, the Cuban Missile Crisis, [and] a whole host of regional crises from British Guiana to the Congo, and the start of the long American ordeal in Vietnam.” During this time, Kennedy and Macmillan worked hard to achieve a foreign policy transition from brinkmanship to detente. Unlike previous foreign policy challenges, the pair had to deal with the threat of nuclear weapons.

The nuclear threat changed the metric of foreign policy calculations. One false move or Dr. Strangelove-type scenario couldn't simply lead to another world war, but to nuclear holocaust. These were, and still are, weapons that can cause not just massive devastation, but possible human extinction.

During the early sixties, the Cold War entered a challenging phase that could be seen like a global chessboard. The situation became more complicated with a bombastic Nikita Khrushchev ruling the Soviet Union and General De Gaulle alienating both Great Britain and the United States with an idiosyncratic and off-putting foreign policy. Germany lay in the middle, with a divided Berlin as a vital chess piece.

Mr. Sandford explores how Kennedy and Macmillan dealt with these numerous challenges through several sources, including archival material and their personal correspondence.

The relationship between Kennedy and Macmillan could be seen as epistolary and familial. Kennedy's sister married William Cavendish, son of the 10th Duke of Devonshire, while Macmillan married Dorothy Cavendish, daughter of the 9th Duke of Devonshire. After becoming closer acquainted with Jack Kennedy, Harold Macmillan began writing letters beginning with the phrase, “Dear Friend.” It is these intimate correspondences that make the relationship come alive. Mr. Sandford uses the letters to re-create the lives of these two iconic political figures.

It is this close relationship that helped save the world, or so the book asserts. While Kennedy came to the White House as a committed Cold Warrior and staunch anti-communist, Macmillan crusaded to bring about world peace through the end of nuclear proliferation. Macmillan was passionate to enact a test ban treaty. In this partnership, Kennedy operated as a master tactician and Macmillan saw himself as working toward a Grand Strategy.

Beyond the political and ideological differences, the two men had very different public personas. Kennedy represented the New Frontier with youth and dashing good looks. Macmillan, a veteran of the Great War, spent his spare time on the grouse moors in his plus fours. Kennedy was stylish as a Mad Men cast member, whereas Macmillan came across as a bumbling Major from a P.G. Wodehouse novel.

Despite his comical manners, Macmillan had to stage manage an empire in decline. As Prime Minister from 1957 to 1963, he witnessed Great Britain get chastised for its participation in the Suez Canal fiasco. He also managed his nation's process of decolonization.

While Britain's decolonization efforts come across as a foreign policy sideshow, Calder Walton's Empire of Secrets offers a more thorough detailing of this era. In addition to the decolonization, Macmillan's term in office involved damage control for the various intelligence scandals, including the Cambridge spy ring, Kim Philby's high-profile defection, and the Profumo Affair. It was this last scandal that helped galvanize the opposition, ending Macmillan's career as Prime Minister.

The Special Relationship was cut short by an assassin's bullet, yet Macmillan continued his correspondence with Jackie Kennedy for several decades. Macmillan's life proceeds, as if by a cruel twist of fate, several decades after Kennedy's assassination.