Harness the Sun: America's Quest for a Solar-Powered Future 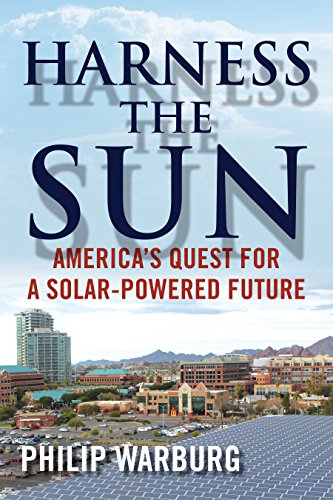 “If you are unfamiliar with the increasing impact of solar energy in America, Harness the Sun should quickly bring you up to speed.”

Written as popular science and for the non-technician, Philip Warburg, author of Harness the Sun, announces “solar energy’s time has come” and travels across America,  reporting on a variety of solar energy installations.

There are an estimated 640,000 U.S. homes currently being powered by the sun, and 2014 has seen solar electricity increase to 32% of all new electrical generating capacity in the U.S. What has changed over the past is that solar panel efficiency has gone up while manufacturing and installation costs have gone down. There have also been policy changes at the federal and state level, including a 30% tax investment credit having its roots under the 2005 Energy Policy Act signed into law under President George W. Bush.

Philip Warburg personalizes his reporting describing the installation of solar panels on the roof of his own home in Newton, Massachusetts. The book includes photos of the installers bravely hoisting themselves onto the high and steep roof of the author’s home by rope, looking almost as if they were scaling not a two-story house but a rugged mountain. Warburg lets the reader know how much he paid for his solar conversion; through federal and state incentives the cost of the $27,000 system was reduced to $17,000. He compares the installation to the price of a new car. The message is, if he can do it, so can you.

The author is a lawyer and his wife is an architect, so one might assume their discretionary income to be greater than that of the average American. Still, there are many more Americans than lawyers and architects who are converting their homes to solar. As for the kind of concerns that readers might recognize (i.e. Let the buyer beware), Warburg’s solar installation, estimated to cover 87% of his electric needs, only realized 75%. The installer’s model did not accurately account for snow.

There is a benefit to the reader that the author is a lawyer. Warburg takes a lawyer’s approach reporting on the politics and business deals of players in the solar power industry. Solar is a disruptive technology—disruptive for those whose political and economic power depends on the status quo. Warburg quotes NRG’s CEO David Crane on calling the energy-producing sector “an industry of Neanderthals.” As an example of caveman thinking, in California, established electric suppliers have spent millions of dollars in advertising to undermine community based solar development.

There is also a difference in impact between homeowners and landlords. Landlords have no incentive to go solar as they can pass electric costs onto tenants. However, for tenants, there are a number of “stored solar,” “community solar,” and “solar garden” programs allow renters to save by buying shares of off-site shared solar facilities. Community solar can also through tax incentives offer rate reductions to homeowners who pay for electricity from conventional suppliers.

Warburg in his reporting interviews members of a number of “public relations” teams, gaining access to political fixers, and reports on those who are on the inside, those taking a cut of the profits through politics or as co-owners solar power generation. Warburg also reports on nonprofit organizations that are promoting affordable solar housing programs, using volunteers to teach the basics of solar installation.

The future is uncertain with disruptive technologies. Consider the impact of other disruptive technologies, as for example with cellphones and hybrid automobiles on existing landlines and highways, whose maintenance is paid for by landline use fees and gas taxes. The question for the transition to solar is of how to keep conventional energy maintenance costs stable in the face of customers reducing their conventional energy use. If enough people leaving the grid,, electric utilities may enter a death spiral.

There is serious money to be made in solar power in solar power development, in manufacture, sale, and real estate promotion. Professional football fields are increasingly powered by solar energy, including Patriot Place, the retail mall adjacent to the Patriot’s Gillette stadium; Philadelphia’s Lincoln Financial Field; and the Washington Redskin’s FedEx Field. The NFL’s solar power installations are built by NRG, the largest independent solar energy supplier to America’s electric utilities. The stadiums are not, 100% powered by solar, but closer to 20%, and the author acknowledges that although “stadium solar may be long on symbolism” that other high tech corporations are taking up the solar banner including Apple, Google, and more traditional Costco, Kohl’s, Macy’s, Staples, Toys-R-Us, Walgreens, and Walmarts. The author notes that Walmart’s owners are also alleged to be making contributions to organizations that are combatting pro-solar policies.

Today solar panels are approximately 14% efficient and can reach 50% in the lab, and can theoretically reach greater than 60% efficiency. Improvements in the manufacturing landscape are changing fast and a new generation can obsolete an old one, just like a new PC can make last year’s model undesirable.

Solar power panel manufacturing is no different from any other business in that it has its boom and bust cycles where overeager investors lead to a glut of product, causing prices to plummet and the manufacturer to go bankrupt. Political support (or lack of) also drives the manufacturing economics. If tax credits drop too far to where solar power becomes more expensive than alternate energy sources, the entire solar market can crash. Or if for example, the state of NJ passes a law that requires a minimum percent of solar energy supplied to the state, that law would force an increased demand for solar (even if solar power were more expensive) creating stable prices allowing investors to recover their investment, at the expense of the taxpayer.

Local politics has the potential for graft. The author, while interviewing the city planner for Lancaster, California points out, “utilities will presumably credit the solar electricity that they purchase towards their own renewable energy obligations under California’s renewable electricity standard. When I suggest that this seems to invite double-counting by multiple entities eager to claim credit for the same renewable energy, she [the city planner] acknowledges this could happen . . . then changes the subject.”

Solar politics are being played at the federal level. Solyndra, a U.S. photovoltaic (PV) manufacturer went bankrupt after receiving a half billion dollars in federal loan guarantees, and there were claims of political cronyism in the deal. Warburg states that the political scuffle over Solyndra obscures the bigger picture of other U.S. clean energy companies that are taking advantage of loan guarantees and tax breaks.

There are other speed bumps along the way to turning solar power into an energy commodity like coal and oil, and these are politics: local, national, and international. For local politics, there is NIMBY (Not In My Back Yard), the same problem that is holding back the development of wind power. For example the wealthy community of Bedminster, NJ, considers a proposed solar farm, the Somerset Hills Power Plant a blight on the landscape.

Another comes from “net metering.” If a utility generates the solar power, that utility makes a profit. However if solar generating customers generate a surplus, the electricity fed back into the grid, is refunded the full retail value of the surplus, which would be above the Utility’s costs, and the difference is borne by ratepayers and taxpayers.

So, overall, how is America doing on the solar energy front? First, on the national front, the numbers for 2014 show a total generation of 18.3 Gigawatts of solar electricity in the U.S., half from photovoltaic panels on homes and businesses, and half from utility scale panels. Though also as a total, less than one half of one percent of electricity in the U.S. is supplied by the sun. On the bright side, this shows plenty of room for growth.

For the federal government, the Department of Defense accounts for 80% of the federal government’s energy use, though the military’s shift to renewables happens to be more about protecting the military against energy vulnerability than about cleaner energy. And as s the DoD has more than 300,000 buildings, fixed installations with suitable rooftops will go solar first.

For the states, the limiting factor for increasing solar energy use is the area available for solar panels. Installations are categorized as “green fields” or natural areas and former farmland, and “brown fields” or “brownscapes,” these are landfills, superfund cleanup sites, and industrial rooftops.

The author provides a table of solar energy potential, by state, solar gigawatt hours, and by sales of electricity to show the amount of electricity that could be provided by solar power by each state. However, to achieve 100% power from solar energy, the area dedicated to solar panels would need to cover 21,000 square miles—there are simply not enough urban rooftops or brownscapes in America to do this. There is however, enough space in the open desert of the southwest.

The U.S. government has provided a road map for utility scale solar energy development in federal land in six southwestern states on 285,000 acres (445 square miles), enough area to generate 23.7 gigawatts. Not surprisingly there has been pushback over the risks to natural resources.

The author visits a utility scale construction site on tribal land in the southwest. Warburg notes the complexity of large-scale construction, “It’s no small feat to install 750,000 solar panels along with the motor-driven GPS-guided tracking systems that keep them aligned with the sun.”

Site development includes a number of biologists, archaeologists, and Native American monitors to ensure compliance with environmental and cultural safeguards, including identifying Native American artifacts uncovered by construction. Note that Native American tribal lands (land held in trust by the U.S.) are only 2% of total U.S. land but 5% of the total potential for solar powered electricity, that is five times U.S. power needs.

With respect to other nations, the U.S. ranks fifth place in cumulative installed solar generation capacity behind Germany, China, Italy, and Japan. And though the solar power industry provides jobs to 174,000 Americans, the U.S. ranks far down in manufacturing capacity. In 2012, just 3% of worldwide production came from factories in America, while 64% came from China. In 2012, there were trade complaints made against China for dumping solar panels in the U.S. In consequence, the U.S. slapped on a 31% tariff on Chinese solar panels. China evaded these tariffs by moving their production facilities to Taiwan and relabeling their products as made in Taiwan. This was successful until a second set of lawsuits. In 2013 trade laws were changed to close the “third party” loophole. However between 2013 and now there has been a fear that increasing tariffs might cause the U.S. energy sector to slump, and U.S. trade organizations have moved to the other side of the issue, going from adversaries to negotiators with China.

The consideration of installing solar power for the home has crossed the financial and psychological threshold, from expensive and experimental to a profitable commodity. One expects the need for this book will soon be unnecessary—solar power will be the default choice.

If you are unfamiliar with the increasing impact of solar energy in America, Harness the Sun should quickly bring you up to speed.