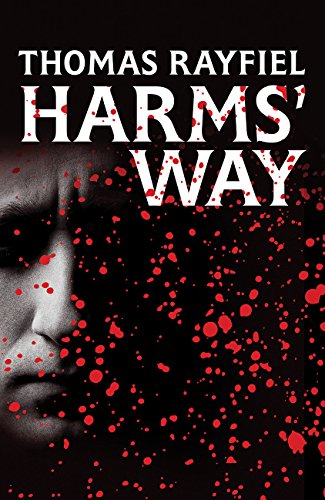 “A chilling journey through a killer’s mind . . .”

Ethan Harms is a serial killer, one of many at a super-maximum detention center where American’s most psychotic killers are imprisoned, his name ironic in view of his crimes.

The general aura of the prison is of endless, hopeless boredom.

“I do not know who I am any more. When I arrived, I had a strong sense of self but the borders have blurred. We spend most of the day and night in our cells. The resulting boredom is worse punishment than could be inflicted by any medieval torture. To stare and know there will be no change in what you are staring at, that this steel bar will be here long after you are gone, to count every heartbeat, is a bleak existence.”

Medicated because of seizures, Ethan’s pastimes are observing his fellow inmates and composing mental letters to his mother who no longer visits. He doesn’t know whether she’s dead or alive for she never answers the few letters he actually mails. He knows nothing of his only relative’s whereabouts just as he is now unaware of the outside world.

“That is one of the compensations of being locked up. With no news, no devices, a marvelous falling-away occurs. What we are left with is grim, but has a reality I almost never encountered on the outside.”

Ethan’s next-door cellmate in his solitary confinement is Cooney, a man who has profited from death by becoming a bestselling author, dictating his crimes into a tape recorder for publication.

Cooney has fans, mostly women, who write him, want to meet him. They aren’t allowed, of course.

Sometimes Harms and Cooney trade fictitious victims, of what they’d say and do with someone given to them for their specific entertainment—completely imaginary, of course, no actual names or locations involved.

Then Harms is called to the warden’s office.

“We have a job for you but we don’t want you to overanalyze it.”

The warden wants Harms to “help” him, by repeating any conversations he has with Cooney.

“People say you are the only one Cooney opens up to. Get Cooney to talk. There’s a seventeenth victim, not mentioned in his book. Find out where she is.”

What does harms get for his “cooperation”? A box of art supplies, something Dr. Roberta Bush, working on her doctorate degree, uses in her sessions.

“You think I’d sell out Cooney for a bunch of art supplies?”

But he does, perhaps unintentionally.

When Cooney is taken from his cell and doesn’t return, Harms realizes he’s betrayed a fellow killer. He doesn’t have time to worry about this for a new distraction appears: a new inmate, Littlejohn, who won’t talk about himself or his crimes. On his own, Harms makes a discovery. Someone is abusing Littlejohn, beating him mercilessly. This gives him something else to think about instead of the monotony of each passing day.

“He has marks. It is almost like they are voluntary they are so evenly spaced, but someone is doing harm to him.”

When he discovers the abuser’s identity, it will shock him in ways even a killer wouldn’t expect.

Eventually, Harms concentrates on that other new another factor in his life—Dr.  Roberta Bush, working on her doctorate, interviewing Harms as part of it. Their relationship should be impersonal but gradually, it becomes something more.

“There’s always a helpless feeling when she leaves, as if I have failed, as if I could have made her stay forever by saying the right thing. The invisible thread between us does not break. It plays out and out and out.”

It is his relationship with Dr. Bush that gives Harms the power to escape not only his prison but brings him back to his “true” self, and to a startling and shocking, but not completely unexpected, dénouement.

Harms’ Way is a chilling journey through a killer’s mind, presented as a near stream-of-consciousness narration so that the segues from one subject to another occur in such a way it’s sometimes difficult to differentiate the real from the unreal, what is actually happening, from Harms’ ruminations and recollections.

Though the method of Harms’ actual crimes are never fully described, this absence allows the reader’s imagination to ‘fill in the blanks’ and probably make the crimes even more horrific than they may have been.

Readers will no doubt feel a surprising sympathy for the characters in this story, then remind themselves of the crimes committed and have an immediate reversal of opinion.  Some may question whether the isolation into which these men are placed makes them worse as it causes their thoughts to fester in minds blank with boredom, to keep returning to the one thing they’re certain of: their crimes.

Nevertheless, the emotion evoked by this story will remain tucked away in the heart, in the form of dismaying pity, that, through heredity, environment, or both, the minds of some individuals can make them so cruelly inclined to their fellow beings.