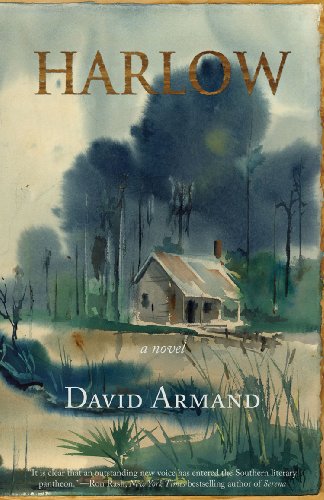 “Harlow is a tough little novel that plunges the reader into a fully realized way of life.”

Reading David Armand’s second novel Harlow, set in Louisiana, one cannot help but feel the presence of other writers. Of course the South is the land of Faulkner, and Harlow is similarly infused with characters who have inherited a dark past.

The novel opens with Leslie, a boy, on a journey to reconnect with his father, a car thief who has only seen his son once—from behind prison bars. Leslie must walk and ultimately hitchhike from his hometown Sun to Greensburg where he has heard his father now lives. His mother will not miss him, nor his half-sisters. The boy takes off into the forest that skirts the highway on a quest.

Along the road, Leslie is picked up by a young woman named Nevaeh who takes Leslie back to her trailer, past “the smoldering trashfire in the yard and up the three cinderblock steps.”

It is in these depictions of hard Southern life that the novel soars. In his sleep, Leslie has nightmares, and in his waking life he has memories triggered by a momentary feeling of cold. He recalls duck hunting with Jim, Leslie’s mother’s boyfriend, who had impregnated one of Leslie’s half-sisters. The hunt is hard and cold, and Leslie has a broken arm.

Mr. Armand describes in vivid detail the texture of the scene. One feels the hard joy in Leslie’s learning to hunt. His competence is paramount to his sense of himself as a Southerner. Leslie now knows how to hunt. A man of practical values, he can manage the concrete world.

The reader learns of Harlow, Leslie’s absent father, before Leslie finds him. He was abused and humiliated by his own father. Implicitly, poor fathering is a learned inheritance.

Though the lives of Harlow and Leslie have not intersected before, their pasts exist on the same plane. This parallel is too plain and obvious, and undermines the vivid realism of the style; however, when they do finally meet, they bond, and admirably Mr. Armand avoids a predictable expression of anger by Leslie or uncharacteristic loving embraces. The two carry on, but together, as people do in this hard land.

As the plot moves into the future, coincidences occur that suggest the unavoidable fates of the characters. An air of Greek tragedy imbues this simple tale, the son falling prey to coincidence much like Oedipus does in his meeting his father on the crossroads. It’s a bleak picture of inescapable pain and loss, in which lives are not forged but solidify into one of the links of a chain.

Yet in this generational novel, the plot is thin. Most of the first half of this short work is filling in past—important, but one wishes the author had either more fully layered this history with present action or expanded the work to further develop the relationships once characters meet.

On the other hand, Mr. Armand’s style intentionally eschews psychoanalyzing or illuminating the complexities of character. His writing is reminiscent of Hemingway: straightforward descriptions of manly action punctuated by laconic dialogue.

David Armand’s Harlow is a tough little novel that plunges the reader into a fully realized way of life.