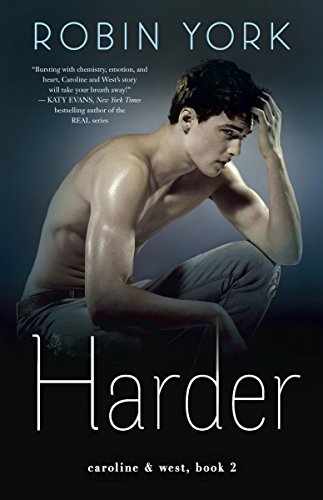 “Harder will be loved by many, hated by a few, and talked about by everyone.”

Harder is, well, harder to read.

So many contemporary romance heroes share a familiar conflict: They are convinced they have nothing positive to give the heroine. It’s fair to say that the majority of romance novels hinge on this archetype. In most cases the hero’s failing is ultimately revealed to be noble at its root. As a result, the reader does not need to offer the hero her own forgiveness to buy in to the happy ending, because he needs no forgiveness except his own.

York has eschewed that variety of “soft” resolution in favor of an approach that takes real guts. Harder looks squarely down at the third rail of romance plot lines and then boldly steps right onto it. In the first few chapters of Harder, West does something so awful that a few readers’ hearts are bound to split right open on the page. It’s the sort of dramatic twist that makes it all but impossible to feel apathy about what Ms. York has done to her characters.

The result is a book so powerful and dramatic that it’s destined to be loved by many and hated by a vocal few. For in order for Caroline to forgive West, they must both experience powerful character growth before the close of the last chapter. But so too must the reader forgive him. And it’s a credit to York’s powerful setup that forgiving him is not an easy task.

Luckily, there is so much else to love about Harder. York’s characterization of West’s middle school-aged sister is crisp and unflinching. And as with all this author’s work, the prose itself is on a higher plane than readers of New Adult have come to expect.

With searing metaphor and visceral descriptions of love and all its attendant pains, Harder will be loved by many, hated by a few, and talked about by everyone.